WHEN THE NOISE DIES 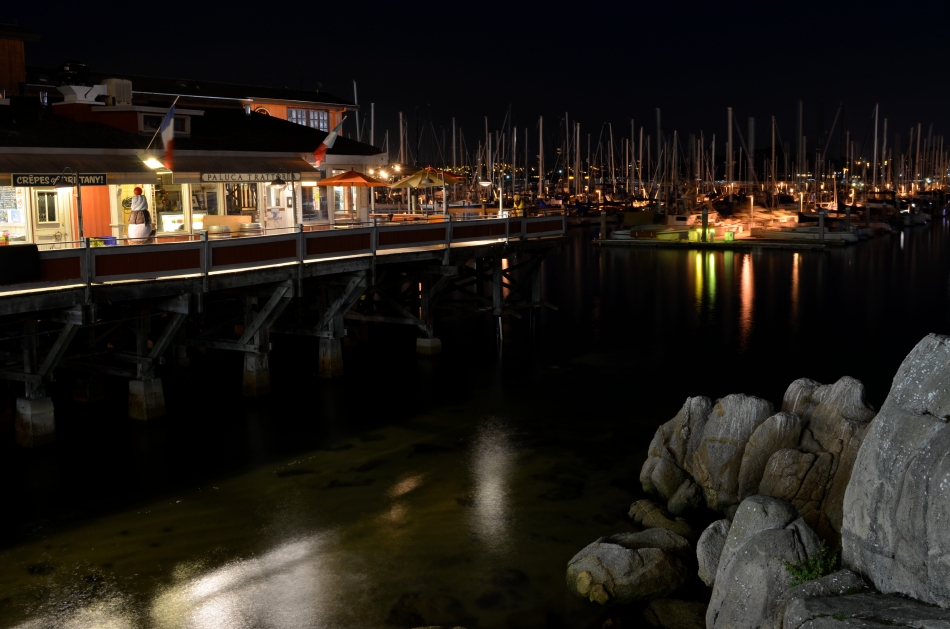 In the day, this place is a madness of color and noise. At night, you have its wonders all to yourself. Fisherman’s Wharf in Monterey, California. 25 second exposure at f/10, ISO 100, 24mm.

AMERICA IS A LOUD PLACE. IF WE DON’T HEAR NOISE WHEREVER WE GO, WE CREATE OUR OWN. It is a country whose every street rings with a cascade of counterpointed voices, transactions, signals, warnings, all of it borne on the madly flapping wings of sound. There are the obvious things, like car horns, screeching tires, soaring planes, thundering rails, somebody else’s music. And then there are the almost invisible hives of interconnecting lives that tamp vibration and confusion into our ears like a trash compactor.

We no longer even notice the noise of life.

In fact, we are vaguely thrown off-balance when it subsides. We need practice in remembering how to get more out of less.

That’s why I love long night exposures. It allows you to survey a scene after the madding crowd has left. Leaving for their dates, their destinies, their homes, they desert the fuller arenas of day and leave it to breathe, and vibrate, at a more intimate rhythm. Colors are muted. Shadows are lengthened. The sky itself becomes a deep velvet envelope instead of a sun-flooded backdrop.

The noise dies, and the quiet momentarily holds the field.

The above image is of Monterey’s Fisherman’s Wharf, one of the key tourist destinations in California, a state with an embarrassment of visual riches. During the day, it is a mash of voices, birdcalls, the deep croak of harbor seals, and the boardwalk come-ons of pitchmen hawking samples of chowder along the wharf’s clustered row of seafood joints. It is a colorful cacophony, but the serenity that descends just after dark on cold or inclement nights is worth seeking out as well.

Setting up a tripod and trying to capture the light patterns on the marina, I was stacking up a bunch of near misses. I had to turn my autofocus off, since dark subjects send it weaving all over the road, desperately searching for something to lock onto. I am also convinced that the vibration reduction should be off during night shots as well, since….and this is counter-intuitive….it creates the look of camera shake when it can’t naturally find it. Ow, my brain hurts.

The biggest problem I had was that, for exposures nearing thirty seconds in length, the gentle roll of the water, nearly imperceptible to the naked eye, was consistently blurring many of the boats in the frame, since I was actually capturing half a minute of their movement at a time. I couldn’t get an evenly sharp frame, and the cold was starting to make me wish I’d packed in a jacket.  Then, out of desperation, I rotated the tripod about 180 degrees, and reframed to include the main cluster of shops along the raised dock near the marina. Suddenly, I had a composition, its lines drawing the eye from the front to the back of the shot.

More importantly, I got a record of the wharf’s nerve center in a rare moment of calm. People had taken their noise home, and what was left was allowed to be charming.

And I was there, for both my ear and my eye to “hear” it.