CERTAIN INANIMATE OBJECTS INTERACT WITH THE LIVING TO SUCH A LARGE DEGREE, that, to me, they retain a certain store of energy

Just horsehair and wood, but it has an elegance all its own.

even when standing alone. Things that act in the “co-creation” of events or art somehow radiate the echo of the persons who touched them.

Musical instruments, for my mind’s eye, fairly glow with this force, and, as such, are irresistable as still life subjects, since, literally, there is still life emanating from them. 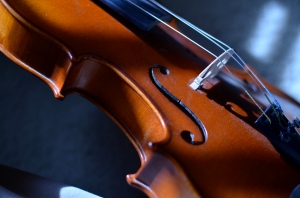 A while back I learned that my wife had, for years, held onto a violin once used for the instruction of one of her children. I was eager to examine and photograph it, not because it represented any kind of technical challenge, but because there were so many choices of things to look at in its contours and details. There are many “sites” along various parts of a violin where creation surges forth, and I was eager to see what my choices would look like. Also, given the golden color of the wood, I knew that one of our house’s “super windows”, which admit midday light that is soft and diffused, would lend a warmth to the violin that flash or constant lighting could never do.

Everything in the shoot was done with an f/1.8 35mm prime lens, which is fast enough to illuminate details in mixed light and allows for selectively shallow depth of field where I felt it was useful. Therefore I could shoot in full window light, or, as in the image on the left, pull the violin partly into shadow to force attention on select details.

The delight is in the details.

props, I was eventually more satisfied with close-ups around the body of the violin itself, and, in one case, on the bow. Sometimes you get more by going for less.

One thing is certain: some objects can be captured in a single frame, while others kind of tumble over in your mind, inviting you to revisit, re-imagine, or more widely apprehend everything they have to give the camera. In the case of musical instruments, I find myself returning to the scene of the crime again and again.

They are singing their songs to me, and perhaps over time, I quiet my mind enough to hear them.

And perhaps learn them.