LEGEND HAS IT THAT ORSON WELLES, STAYING FOR A WHILE AS A GUEST AT PETER BOGDANOVICH’S HOME AROUND 1970, convinced him that the small Texas town he wanted to portray in the bleak drama The Last Picture Show would be “too charming” if shot in color. Bogdanovich went with the starkly toned palette of black and white, and you know the rest. Eight Oscar nominations, two wins, and an honored slot in cinema history.

Bogdanovich made an artistic decision to make something “uglier” in order to make it “real”.

For me, this idea has always been like swimming against the current, since, as a kid, I was influenced initially by scenic photographers, then, somewhat later, photojournalists, who seek a completely different end product. I tend to default to the idea of making things look pretty. Even today, me knowing the impact of recording things as they are, warts and all, is one thing, while me, deliberately manipulating an image in order to change or amplify its darker elements is a stretch. It’s not something I instinctively bend toward. 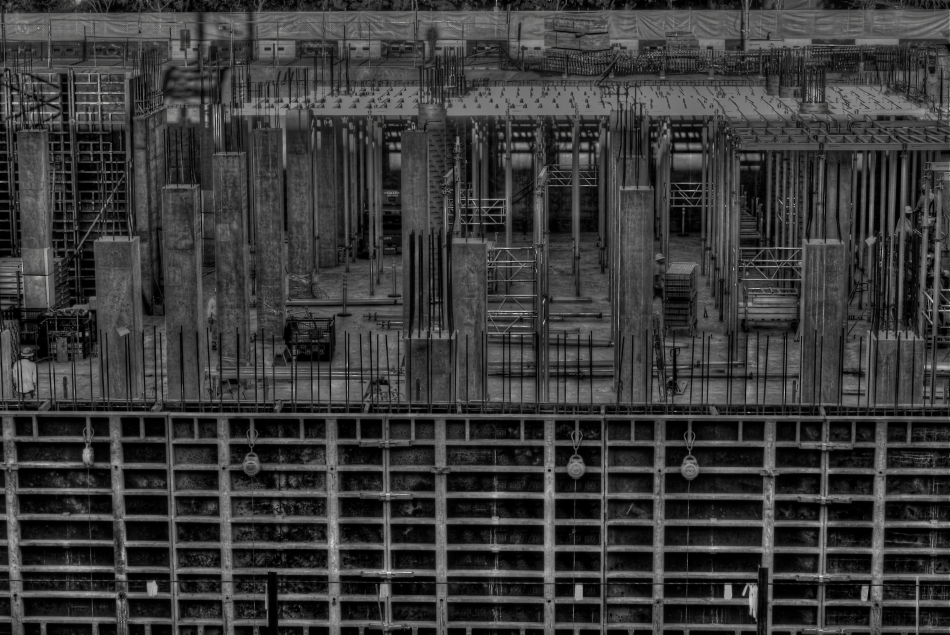 Hideous or wondrous, depending on how you see it. A deliberately “over-cooked” HDR from three exposures, all taken at f/11 for maximum detail, and ISO 100 with a 50mm prime lens.

Still, some stories are told in capture and others are revealed in processing, and while photography is interpretation as well as mere recording, I like to take a crack at changing the context of a picture, to make its parts add up to something drastically different. A few years ago, the parking garage near my job looked out at a massive construction project. My parking slot was situated such that I was about three floors up in the air, peering through the open wall of the garage to easily take in a panoramic view of the entire length of the new building’s emerging structure.  I soon got into the habit of getting to work about fifteen minutes early so I could hop out and snap whatever activity I could catch.

The finished building eventually smoothed into something acceptably serviceable, if bland, but, with its raw skeleton mounting day by day, an immense feeling of grim, awful power was climbing out of that place. It couldn’t be seen in color, especially not in the benign, golden light of early morning. This thing was appearing to my eye as a sinewy, dark life force, inevitable, dreadful……an impression I would have to achieve through a complete reworking of tone and texture. I decided to use High Dynamic Range processing, not to merely rescue detail lost in highly contrasted nooks, but to intensify every grain, granule and hobnail of the building, to render it in a surreal, slightly hellish aspect. To make it “ugly” on purpose…..or, more exactly, to my purpose.

Playing at changing the emotional feel of a picture isn’t native to me, so I am always grateful when this part of my brain rouses from sleep and demands to be exercised. The persistent (and false) notion of photography since its inception is that it shows the world as it is, a lie which is debunked with every willful act of picture-taking. No less than painting, the photo image is both document and statement, truth and distortion.

It never has to settle for being mere reality, nor could it claim to be.

And that is its seductive pull.