WHEN YOU’RE BEHIND THE WHEEL, SOME PHOTOGRAPHS NAG THEIR WAY INTO YOUR CAMERA. They will not be denied, and they will not be silenced, fairly glowing at you from the sides of roads, inches away from intersections, in unexplored corners near stop signs, inches from your car. Take two seconds and grab me, they insist, or, if you’re inside my head, it sounds more like, whatya need, an engraved invitation? Indeed, these images-in-waiting can create a violent itch, a rage to be resolved. Park the car already and take it.

Relief is just a shutter away, so to speak. 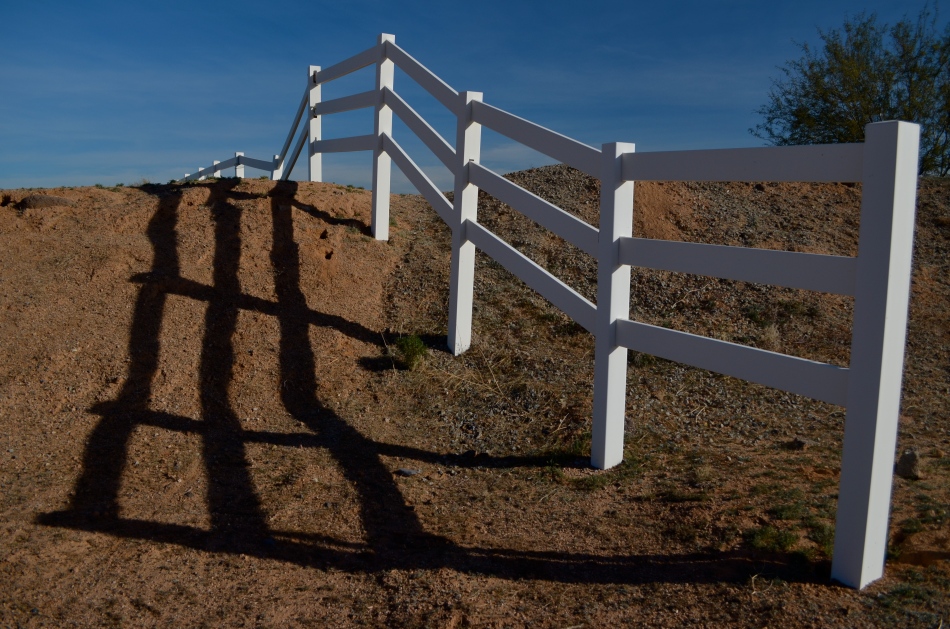 The vanishing upward arc and sinuous mid-morning shadows of this bit of rural fencing has been needling me for weeks, but its one  optimal daily balance of light and shadow was so brief that, after first seeing the effect in its perfection, I drove past the scene another half dozen times when everything was too  bright, too soft, too dim, too harsh, etc., etc. There was always a rational reason to drive on.

It’s nothing but pure form; that is, there is nothing special about this fence in this place except how light carves a design around it, so I wanted to eliminate all extraneous context and scenery. I shot wide and moved in close to ensure that nothing else made it into the frame. At 18mm, the backward “fade” of the fence is further dramatized, artificially distorting the sense of front-to-back distance. I shot with a polarizing filter to boost the sky and make the white in the wood pop a little, then also shot it in monochrome, still with the filter, but this time to render the sky with a little more mood. In either case, the filter helped deliver the hard, clear shadows, whose wavy quality contrasts sharply with the hard, straight angles of the fence boards.

I had finally scratched the itch.

This entry was posted on February 14, 2014 by Michael Perkins. It was filed under Abstract, Available Light, Composition, Depth Of Field, Framing, P.O.V., Patterns, Perspective and was tagged with 18mm, Composition, perspective, Polarizing Filter, Shadows, Wide-Angle.