IN PHOTOGRAPHY, WE FIRST LEARN HOW TO CONTROL LIGHT WHEN THERE IS A PRETTY GOOD SUPPLY OF IT. Our baby-step pictures are usually taken in the middle of the day, where it’s easier to over-expose than under-expose the shot. The sun is out and it’s a constant resource. We may step in and out of a shadow or need to fill a few gaps with flash, but mostly the issue of light is about managing something you have a big bunch of.

Once we venture into night shots, light becomes a precious commodity, like water in the desert. The equation is flipped. Now we’re struggling to get enough illumination to shape a shot, or sometimes just save it. We can shoot in the reduced light that’s on hand, but  it takes a little more orchestration. Move into time exposures and the terms of engagement change again, with the ability to play God with the physics of things. 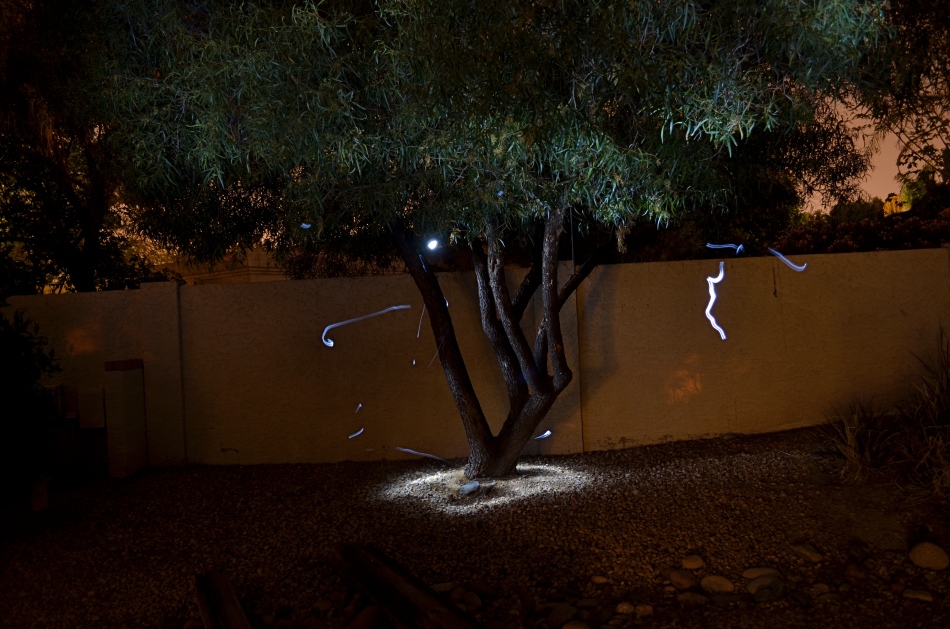 Shot in complete darkness and selectively light-painted with a handheld LED. Exposed for 73 seconds at f/4.5, ISO 100, 18mm. The light streaks are “wrong turns” with my flashlight. Oops.

And then there’s light painting, selective hand illumination during long exposures, where the aim is suddenly beyond the merely real. In fact, light painting is about deliberately manipulating mood and atmosphere, of bringing a magical quality where none exists. It also is the kind of low-light photography with the least predictable results, and the highest possible failure rate. You are constantly in uncharted waters, since no two exposures come out even remotely alike. You’re flying blind with your eyes open.

I have recently begun to head outdoors to re-imagine trees in these artificial, fantasy-flavored “light compositions”, in an effort to lend heft to subjects that, in daylight, would register pretty low on the wow meter. Over the years, I have honed my technique with tabletop light painting in controlled interiors, but if I get one exterior shot in thirty that I can live with, that’s an amazing day, er, night.

I don’t have any wisdom to impart on these shots, since their value is so crazy subjective. You do it until you like it, that’s all. But do yourself a favor sometime and do wade in. You might catch the fever, or you may experience the urge to hurl your tripod over the neighbor’s wall like a javelin of rage.When you don’t have enough light, you’re kind of in free fall.

But even if you don’t stick the landing, it ain’t fatal.