THE STRANGEST VISUAL EVIDENCE OF MAN’S PRESENCE ON THE PLANET IS HIS ABILITY TO COMPARTMENTALIZE HIS THINKING, the ability to say, of his living patterns, “over here, cool. Over there, six inches away, ick. You see these kind of yes/no, binary choices everywhere. The glittering, gated community flanked by feral urban decay. The open pasture land that abuts a zoo. And the natural world, trying desperately to be heard above the roar of its near neighbors from our co-called “civilization”. 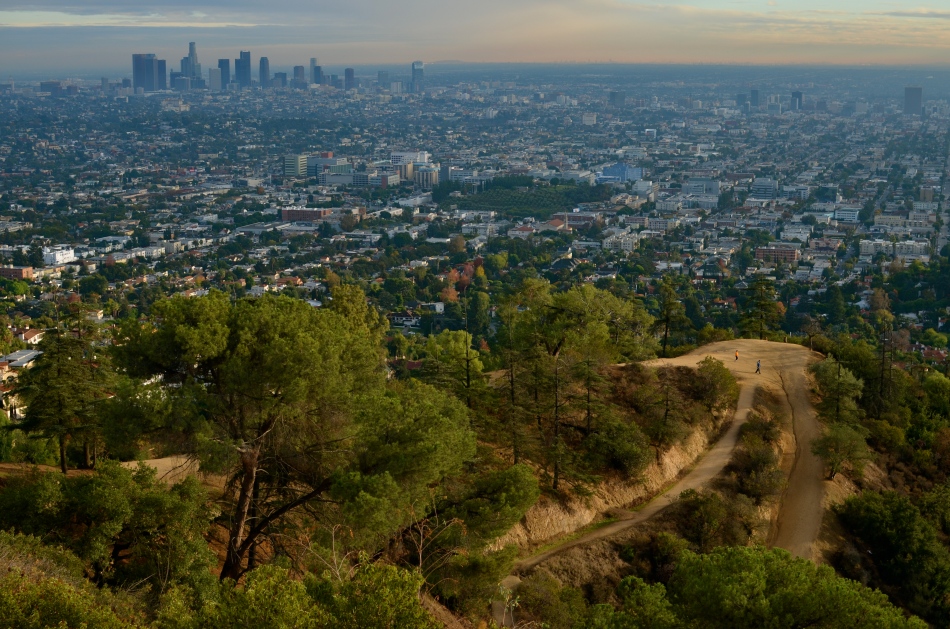 I recently re-evaluated this image of the running paths at Los Angeles’ Griffith Park and the nearby uber-grid of the central city. The colors are a bit muted since it was taken on a day of pretty constant rolling overcast, and it really is not a definitive portrait of either the city or the nearby greenspace, but there is a little story to be told in the ability of the two worlds to co-exist.

L.A’s lore is rife with stories of destroyed environments, twisted eco-structure, bulldozed neighborhoods and political hackery advanced at great cost to the poor and the powerless. In the face of that history, the survival of Griffith, a 4,310-acre layout of parks, museums, kiddie zoos, sports courts, and concert venues on the eastern end of the Santa Monica Mountains, is something of a miracle. It’s the lion lying down with the lamb, big-time, a strange and lucky juxtaposition that affords some of the most interesting fodder for photographers anywhere in California. Photogs observe natural pairings in the world, but they also chronicle alienations, urban brothers from different mothers, tales of visual conflicts that, while they can’t be reconciled, are worth noting.

This entry was posted on April 6, 2014 by Michael Perkins. It was filed under 35mm, California, Neighborhoods, P.O.V., Parks and was tagged with Environments, Griffith Park, Los Angeles, Parks, urban.