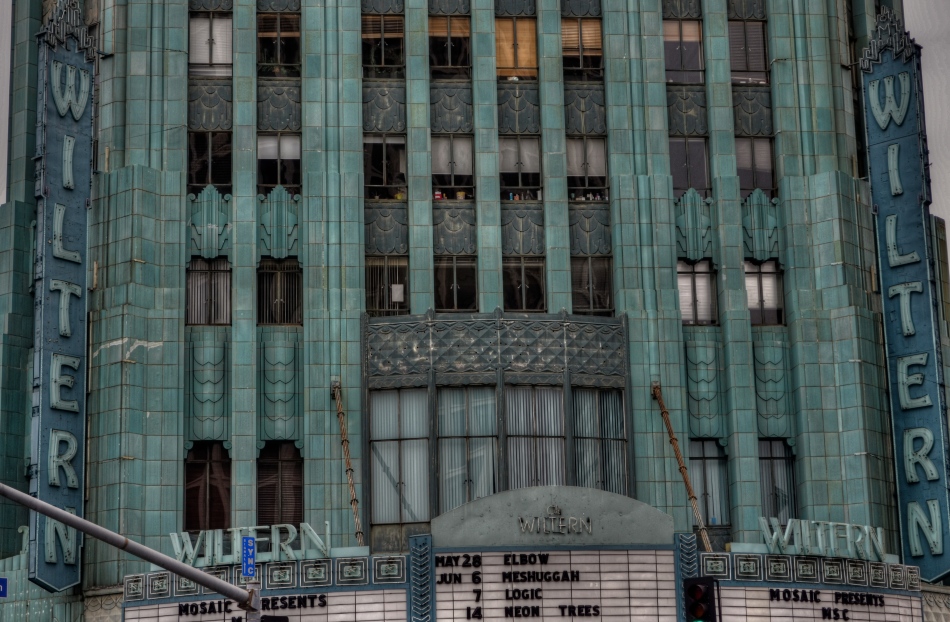 The wondrous Wiltern Theatre in Los Angeles. A three-exposure HDR to amplify time’s toll on the building’s exterior.

SHE HAS WITHSTOOD THE GREAT DEPRESSION, A WORLD WAR, DECADES OF ECONOMIC UPS & DOWNS, and half a dozen owners (some visionaries and some bums), and still, the sleek green/blue terra-cotta wedge that is the Wiltern Theatre is one of the most arresting sights in midtown Los Angeles. From her 83-year old perch at the intersection of Western Avenue and Wilshire Boulevard, the jewel in the lower half of the old Pelissier building still commands attention, and, for lovers of live music, a kind of creaky respect. The old girl isn’t what she used to be, but she is still standing, as the same house that once hosted film premieres in the days of Cagney and Bogart now hosts alternative and edge, with pride.

And she still makes a pretty picture, lined face and all.

Opened in 1931 as a combination vaudeville house and flagship for Warner Brothers’ national chain of film theatres, The Warner Western, as it was originally named, folded up within a few years, re-opening in mid-Depression L.A. as the Wiltern (for Wilshire and Western) operating virtually non-stop until about 1956. As a vintage movie house, it had been equipped with one of the most elegant pipe organs in town, and enthusiasts of the instrument built a small following for the place for a while with recitals featuring the instrument. By the 1970’s, however, economies for larger-than-life flicker palaces were at an all-time low, and the Wiltern’s owners tried twice themselves to apply for permission to blow her down. Preservationists got mad, then got busy.

Restoration began in the 1980’s on the Pelissier building in general, but the Wiltern, with its ornate plaster reliefs and murals, had been so neglected over the years that its turnaround was slower. It was finally reborn in 1985 as a live performance theatre, losing some seat room but newly able to stage everything from brain-blaster garage rock to Broadway road productions and ballet.

I shot the Wiltern with three HDR frame, all f/5.6, with exposure times of 1/60, 1/100. and 1/160, and blended the final image in Photomatix to really show the wear and tear on the exterior. HDR is great for amplifying every flaw in building materials, as well as highlighting the uneven color that is an artifact of time and weather. I wanted to show the theatre as a stubborn survivor rather than a flawless fantasy, and the process also helped call attention to the building’s French Deco zigzags and chevrons. For an extra angle, I also made some studies of the glorious sunburst plaster ceiling over the outside ticket kiosk. It was great to meet the old girl at last, and on her own terms.