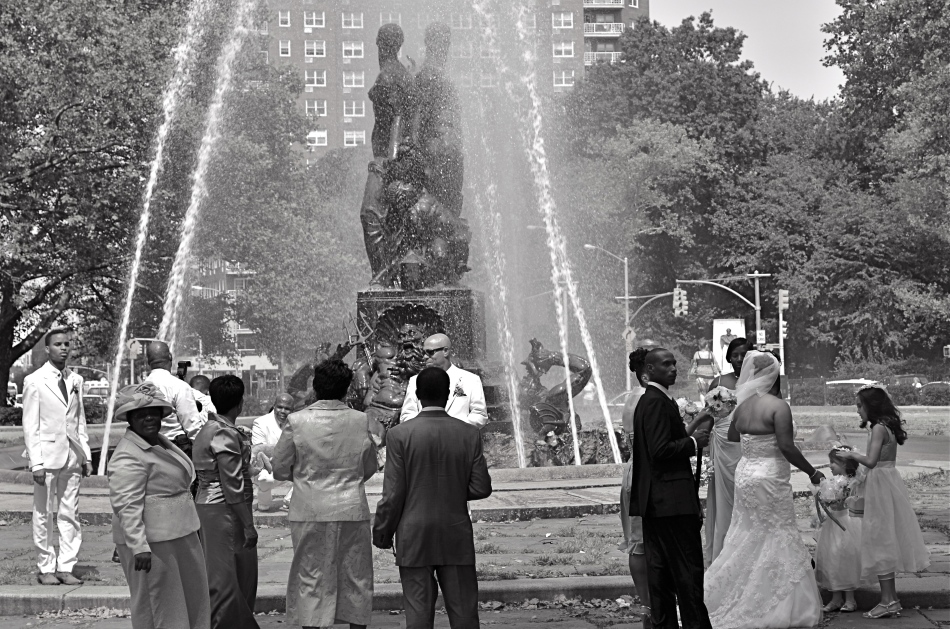 IT STARTED OFF AS WHAT IS CURRENTLY REFERRED TO AS A FAIL: I was clicking away throughout the park areas in Brooklyn’s Grand Army Plaza, trying to make some kind of epic composition out of the beautiful Bailey Foundation near the war memorial arch. It features several heroic figures standing on the prow of a ship, under which can be seen several mythical denizens of the deep including Neptune himself. It’s a strong piece of sculpture, crowning a plaza that was designed by the great Frederick Law Olmstead, the mastermind behind Manhattan’s Central Park, and I should have been able to do something with it. Something.

Problem with the fountain is the water itself, which, instead of a wonderfully flowing cascade is something between a Jacuzzi shower head and a resort sprinkler system. Its renders the statuary nearly impossible to get in focus, and sends refracted rainbows and hotspots dancing gaily into your lens. Suddenly the impulse of a moment is a day’s work, and, just as I was beginning to check this particular world wonder off my to-do list, in moved the people you see here.

I don’t shoot weddings but the group you see here was, in fact, a shoot of a wedding, something else altogether, since there is a more relaxed dynamic than will ever be present during an actual ceremony. Photographically, rehearsals are more fruitful than actual play performances, and, in that vein, wedding prep holds more pictorial potential, for me, than weddings with a capital W. There is a looser feel, an air of celebration that somehow gets starched out of the final product. Do I stand here? You want me holding the flowers? Shouldn’t the tall people be at the back? Best thing of all, these folks were already taking direction from their “official” photog, so I was the last thing on their mind. There’s no better role at a wedding than that of The Invisible Man.

My glorious fountain had been reduced to a prop, which means the wedding party saw its potential, as I had. The difference is, they gave me what I hadn’t been able to find for myself.