OUR GRADE SCHOOL HISTORY CLASSES DRUMMED CERTAIN NAMES INTO OUR HEADS AS THE “EXCLUSIVE” CREATORS of many of the wonders of the modern age. We can still bark back many of those names without any prompting, saluting the Edisons, Bells, and Fords of the early part of the 20th century and the Jobses and Gateses of its final years. However, as we grew older, we realized that the births of many of our favorite geegaws (television, for example) can’t be traced to a single auteur. And when it comes to photography, their are too many fathers and mothers in all ends of the medium to even enumerate.

Several tinkerer-wizards do deserve singling out, however, especially when it comes to the mindset that all of us in the present era share that photography ought to be immediate and easy. And, in a very real way, both of these luxuries were born in the mind of a single man, Dean Peterson, who presided over half a dozen revolutions in the technology of picture making, most of his own creation. As an engineer at Eastman Kodak in the early ’60’s, Dean created and developed the Instamatic camera, and, in so doing, changed the world’s attitude toward photography in a way every bit as dramatic as George Eastman’s introduction of cheap roll film in the late 1800’s. Peterson’s new wrinkle: get rid of the roll. 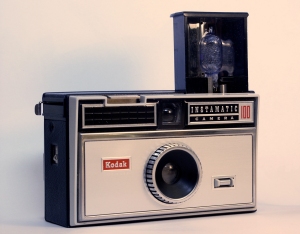 Yeah, you had one. The Kodak Instamatic 100.

Or, more precisely, get rid of loose film’s imprecise process for being loaded into the camera, which frequently ruined either single exposures or entire rolls, depending on one’s fumble-fingered luck. Peterson’s answer was a self-contained drop-in cartridge, pre-loaded with film and sealed against light. Once inside the camera, it was the cartridge itself that largely advanced the film, eliminating unwanted double-exposures and making the engineering cost of the host camera body remarkably cheap. Peterson followed Eastman’s idea of a fixed-focus camera with a pre-set exposure designed for daylight film, and added a small module to fire a single flashbulb with the help of an internal battery. Follow-up models of the Instamatic would move to flashcubes, an internal flash that could operate without bulbs or batteries, a more streamlined “pocket Instamatic” body, and even an upgrade edition that would accept external lenses.

With sales of over 70 million units within ten years, the Instamatic created Kodak’s second 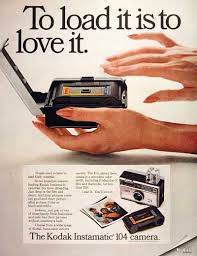 golden age of market supremacy. As for Dean Peterson, he was just warming up. His second-generation insta-cameras, developed at Honeywell in the early ’70’s, incorporated auto-focus, off-the-film metering, auto-advance and built-in electronic flash into the world’s first higher-end point-and-shoots. His later work also included the invention of a 3d film camera for Nimslo, high-speed video units for Kodak, and, just before his death in 2004, early mechanical systems that later contributed to tablet computer design.

Along the way, Peterson made multiple millions for Kodak by amping up the worldwide numbers of amateur photographers, even as he slashed the costs of manufacturing, thereby maximizing the profit in his inventions. As with most forward leaps in photographic development, Dean Peterson’s work eliminated barriers to picture-taking, and when that is accomplished, the number of shooters and the sheer volume of their output rockets ahead the world over. George Eastman’s legendary boast that “you press the button and we do the rest” continues to resonate through our smartphones and iPads, because Dean Peterson, back in 1963, thought, what the heck, it ought to be simpler to load a camera.

This entry was posted on August 5, 2014 by Michael Perkins. It was filed under History, Kodak, Point-and-shoot, Popular Culture, Snapshot and was tagged with history, Instamatic, Invention, Kodak, Photography, popular culture.