PHOTOGRAPHS OF PERFORMANCES ARE PERHAPS MY FAVORITE STUDIES  OF THE HUMAN FACE. None of the self-conscious artifice or hesitant reticence of the standard portrait shoot are present when a player, be it a violinist or pianist, is fully inside the trance of creation. Call it rapture, call it focus, but something almost holy illuminates the features when people sing or play. All the awareness of their face as a mask melts away, as all mental energy surges to the task at hand. Their faces become some other thing, and I can’t resist trying to preserve that.

ten weeks apart. The first set of images were like walking barefoot through roses; everything worked. The second occasion, just a few days ago, was, by comparison, work, and frustrating work at that. The time of day for both sessions was the same, with mid-morning light entering the hall through cream-color curtains and softening everything to an appealing haze. My distance from the stage was also nearly the same on both days. What created the difference in my results, then, was my choice of lens, pure and simple. All of my “luck” came because the first lens was perfect for the task. All of my muttered oaths at the second occasion were due to how wrong my choice had been.

In the first case, exemplified by the mariachi band in the image at right, I used a 35mm prime, which

is simple, sharp and fast enough, at f/1.8 on the wide-open end, to give me enough light in nearly any situation. In the more recent shoot, I used a 300mm zoom, about the most opposite approach you could try. The lens cannot get any wider open than f/4.5, and shuts down all the way to f/5.6 when fully zoomed in, so, right off the bat, you’re starving yourself for light, especially in a room where most of it is behind the performers. I decided to try the 300 out of pure perverse curiosity, and from a sense of “what can I lose?”, which is a blessing, since, when the results don’t matter, you can try something, just to see what happens.

The light reduction with the 300 was more severe than I’d anticipated. Oh, sure, I could get really tight framings on the performers, but I was going to have to either slow my shutter speed to under 1/60 or jack the ISO up to undesirably high noise level, or, as it turns out, both. The contrast between light and dark was the first thing to take the hit, as tone registered in a muddy middle range with the zoom versus the sharply defined values I had gotten with the 35. 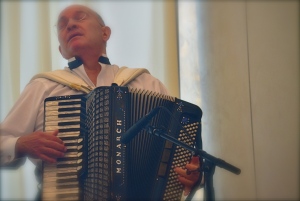 Then there was the overall softness of the 300, due largely to the small amount of camera shake on my part, which, in a zoom, is magnified several times over. In both cases, I got usable images, but whereas with the 35mm prime I had a kind of embarrassment of riches, the object with the zoom shoot was to salvage something and slave away like mad to do so.

I could easily have taken wider framed shots with the 35 (since it can’t zoom), then cropped them for tightness later, as I had on the first day. Instead, I got a lot of really tight shots of musicians that needed serious intervention to make them acceptable. But I want to emphasize that this is what experimentation is for. You put your hand on the hot stove, yell “OWWW!” and refrain from touching the hot stove in future. At the end of the second shoot, I had lost no money, no business, and very little time. That’s education on the cheap.

I don’t mind wearing the dunce cap every once in a while, if I know that, eventually, I’m going to end up in a fedora.

This entry was posted on September 8, 2014 by Michael Perkins. It was filed under Available Light, Composition, Conception, Contrast, Experimentation, Framing, Prime lenses and was tagged with Composition, lighting, Prime lens, processing, Zoom lens.