YEARS AGO, RONALD REAGAN, UPON VISITING HIS OLD ELEMENTARY SCHOOL for a presidential photo opportunity, famously asked the local administrators how they managed to shrink the desks in the classrooms. Of course he was joking, but the remark was a telling one; when we return to the scenes of our earliest dramas and farces, we tend to believe that some other outside force sneaked into the place, before our arrival, and somehow re-ordered reality. We laugh at Reagan’s quip because we can see ourselves saying the same thing. It’s all about us.

Just as we are pleasantly shocked to view the graduated pencil marks on our old kitchen wall that logged our increasing height at different ages, we marvel when we take cameras back to the same places where we took cameras in the past. We think we are measuring time in what we shoot, but we are actually measuring ourselves in how we shoot. A recent trip to my hometown afforded me time to roll around to a number of places where I have repeatedly returned over a lifetime, each time approaching photography, and myself, a little differently. In some cases, the first frames I ever shot of these sites go back over forty years, and, good pictures or bad, the results are a few universes away from those first efforts. 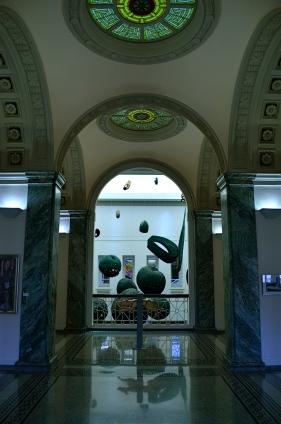 Inside Columbus, Ohio’s Carnegie Library, where I first became a researcher.

How can it be otherwise? I don’t see the same way. I don’t look to see in the same way. Years ago, I was still enthralled with the idea of capturing an image in the box….any image. Hey, it worked. It’s not a stretch to say that, when I first learned to load and wind film or squint into a viewfinder, I was still amazed by the process alone, the idea of freezing time being an inexplicable miracle to me. Beyond hungering to produce my own miracles, I had no concept as to what I should be seeking, or saying.

One thing that has changed over the years is that I no longer try to stop the world with, you know, The Image. There is no “the” anymore,  only “the next”. The thing I need to learn to make the picture will come, in time, if I spend long enough thinking or feeling my way through the problem. The photograph, I now know, is already in there, someplace. I just have to carve and peel until it emerges. In the images you see here, I have finally, decades hence, become ready to register the unknown in a familiar place.

To my amazement, I can actually pre-imagine a shot now, with a reasonable hope of eventually making my hand cash the check my eye has written. Back when I started, every picture was an accident….sometimes happy, often frustrating. Now, as I point my lens toward locales that are old friends, I know that they, largely, are constant. It is I who has moved. There’s some comfort, and lots of possibility, in realizing that the desks didn’t really shrink.

I just learned to stand up.

This entry was posted on December 12, 2014 by Michael Perkins. It was filed under Composition, Conception, Experimentation, Nostalgia, Perspective, Philosophy and was tagged with memory, Nostalgia, perspective, TIme, Viewpoint.