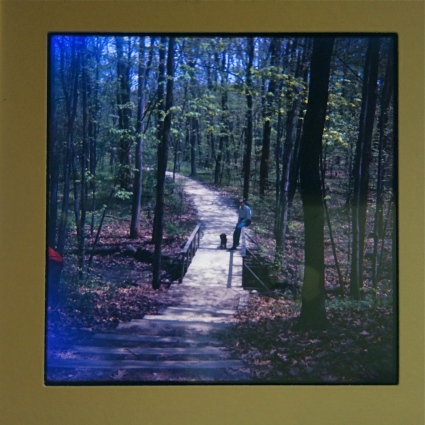 One of my first slides fom 1965. Only after they were processed did I realize they were too big for our family projector.

I CAN NEVER MARK MY FATHER’S BIRTHDAY (today, April 23) without certifying, once again, that I would not presently be a photographer without his intervention. Note that I used the word intervention, not influence. That’s not to say that, as a boy,  I didn’t learn a lot about composition or visualization by watching him tackle a shoot. Far from it. But it was in one simple act of support that he truly kept my first foray in photography from flickering out like so many youthful whims.

And it was done for the cost of a box of oatmeal.

My first camera, a cheap plastic Imperial Mark XII, has been detailed in these pages before. Simply stated, it was okay as a toy, hopelessly inadequate as an optical instrument. At the time I received it as a present (approximately age 13), this reality was lost on me. I was drunk on the thought that I could snap off masterpieces at will, as I supposed Dad did with his Kodak Pony 828. It didn’t take long for me to realize that (a) this, um, modest (pronounced crappy) little box could not deliver what I saw, and (b) changing that was going to mean taking a lot of awful pictures, at substantial cost to a kid budget bordered by redeemed soda bottles and a weekly allowance of $1.

My ignorance was so boundless that I thought that I would simply follow my father into his chosen format, 35mm slides. I loved seeing a blank wall awash with color, and couldn’t wait to claim my own real estate on his Bell & Howell 500 projector. Thing is, I was shooting 620 roll film, so, although the local photo shop faithfully followed my instructions, returning my shots as slides, the images measured (2″ by 2″ square ), unsqueezable into any standard projector. Suddenly, I was stranded. My pictures weren’t prints, and, as slides, couldn’t even be viewed. I felt like a man without a country. Dad’s response: let’s see else we can to do.

Yanking the shade off an old table lamp and unscrewing the bulb, he cut a hole in the bottom of a Mother’s Oats carton wide enough for the shaft of the lamp, connected lamp to box, and re-attached the bulb. Inside the box, he inserted a lining of aluminum foil to maximize the bulb’s meager brightness, then cut a hold in the box lid equivalent to the size of one of my slides. Across the opening, he taped a sheet of mylar, the matte-textured plastic that, as a draftsman, he always had around the house, so that the “hot spot” of the bulb would be diffused across the entire surface of the slide. Power on, mount a slide up top, and presto, a custom-built viewer that allowed me to at least see, if not magnify or project, my images. I was astonished. 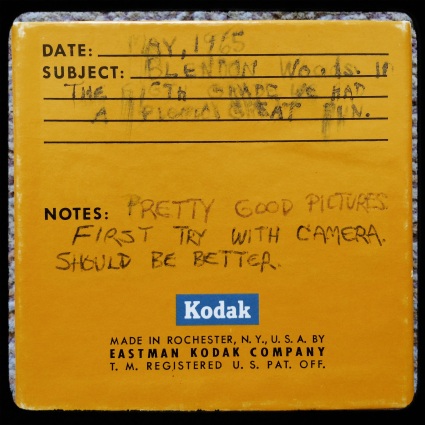 Program notes on my first box of slides, referencing the “great fun” of my eighth-grade picnic at Blendon Woods (sure, sure), and the remark that the pictures “should be better”. Amen, brother.

It wasn’t that he had solved all of my problems: it was that he had legitimized my photographs as something worthy to look at. He had, in fact, granted me admission to “the club”, the elite group of grownups who took their work seriously, and would do anything to enjoy and learn from them. I was no longer a kid whimsically playing with a toy. I was a photographer.

In that simple bit of tinkering, he kept me from abandoning something that had disappointed me, converting my initial frustration back into enthusiasm. It was also a valuable lesson in how to recover from a setback, an admonition: this isn’t the last time you’ll mis-calulate, or fail. But it ain’t fatal. Just keep going.

I did. I have. Fifty years on, my finger’s still on a shutter. And, amazingly, he, at this writing, is still around to repeat that marvelous wisdom.

This entry was posted on April 23, 2015 by Michael Perkins. It was filed under Uncategorized .