It’s the truth. It’s actual. Everything is satisfactual. –lyrics from the Oscar-winning song Zip-A-Dee-Doo-Dah

PHOTOGRAPHY WAS ERRONEOUSLY BILLED, EARLY IN ITS DEVELOPMENT, as a mere recording of reality. This  was, of course, an attempt to characterize the picture-making process as more bloodless, less artistic than painting, which was an interpretation of the world. What early haters of the camera failed to realize, of course, was that photographers were just as selective in their depiction of life as painters, since their medium too, was an interpretation…..of isolated moments, of preferred angles, of temporary actuality.

If you look at individual frames within a strip of motion picture film, it becomes perfectly clear that each still image is a self-contained world, with no way to intuit what has come before a given moment nor what will come next. Thus, no one frame is “reality” but a select sample of it. In daily photography, our choice of angle, approach, and especially light can allow us to create an infinite number of “realities” that only exist in the precise moment in which we see and freeze them. 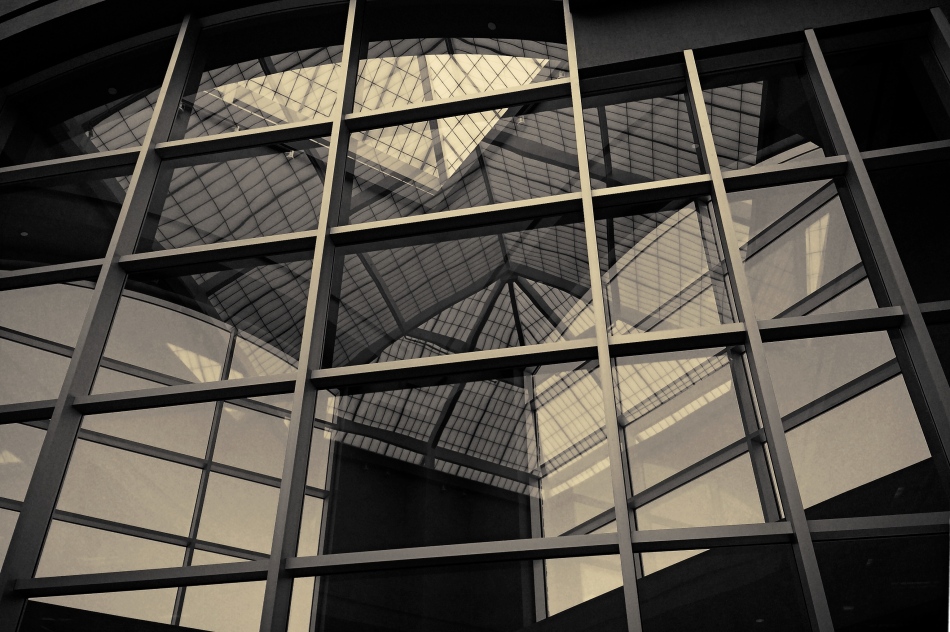 Let’s look specifically at light. As it’s jumbled in multiple reflections, light is particularly precious to the photographer’s eye, since a captured image may recall an effect that even people within inches of the shooter could not see. In the above photo, for example, this mosaic of reflections inside the vestibule of a high-ceilinged building was visible from several specific positions in the foyer. Move yourself three feet either way, however, and this pattern could not be seen at all. In other words, this photographic “reality” came briefly into existence under the most controlled conditions, then was gone.

John Szarkowski, the legendary director of photography for the New York Museum of Modern Art, dedicates an entire section of his essential book The Photographer’s Eye to what he calls “Vantage Point” and its importance to a mastery of the medium. “Pictures (can) reveal not only the clarity but the obscurity of things…and these mysterious and evasive images can also, in their own terms, seem ordered and meaningful.”

Photography is about viewing all of reality and extracting little jewels from within it.

This entry was posted on May 11, 2015 by Michael Perkins. It was filed under Abstract, Available Light, Light, reflection, Viewpoint and was tagged with Composition, Conception, Szarkowski, Viewpoint.