TAKE ME OUT TO THE “ALL” GAME 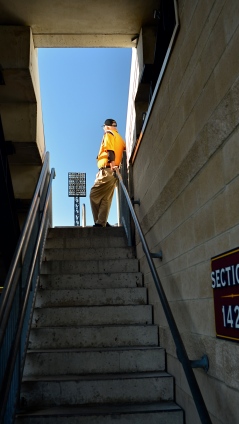 Baseball is a game about anticipation. Photos of it should show that feeling as well.

YOU SEE RIDICULOUS ARTICLES FROM TIME TO TIME claiming that baseball has been replaced as America’s Pastime. Such spurious scribblings invariably point to game attendance, TV ratings, or some other series of metrics that prove that football, basketball, and, who knows, strip Scrabble have reduced baseball to some quaint state of irrelevancy. All such notions are mental birdpoop for one salient reason. No one is giving due attention to the word pastime.

Not “passion”. Not “madness”. Not even “loyalty”. Pastime. A way of letting the day go by at a leisurely pace. A way to gradually unfurl afternoons like comfy quilts. People-watching. Memory. Sentiment. Baseball is for watchers, not viewers, something that television consistently fails to realize. It’s the stuff that happens in the pauses, of which the game has plenty. Enjoying baseball, and photographing it as an experience, is about what happens in the cracks.

Images are waiting to be harvested in the dead spots between pitching changes. The wayward treks of the beer guys. The soft silence of anticipatory space just before the crack of a well-connected pitch. TV insists on jamming every second of screen time-baseball with replays, stat tsunamis, and analysis. Meanwhile, “live”, in the stadium, the game itself is only part of the entertainment. Sometimes, it actually drops back to a distant second.

Only a small percentage of my baseball pictures are action shots from the field: most are sideways glances at the people who bring their delight, their dreams, and their drama to the game. For me, that’s where the premium stories are. your mileage may vary. Sometimes it’s what’s about to happen that’s exciting. Sometimes it’s the games you remember while watching this one. There are a lot of human factors in the game, and only some of them happen between the guys in uniform.

Photography, as a pastime, affords a great opportunity to show a pastime. America’s first, best pastime.