THE LOOK OF SILENCE

Slurry Wall And Hero’s Girder, 2015. The 9/11 Memorial Museum in New York is a cathedral of grim silence.

AS THE MOST PHOTO-DOCUMENTED EVENT IN HUMAN HISTORY, the attacks of September 11, 2001 have spawned images that can never be unseen. Images that tear at you, slam you in the back of the head, wring tears and rage from you, stun you mute.

As the keeper and curator of many of the most powerful of these images, the 9/11 Memorial Museum in lower Manhattan has achieved a tough but fair balance of emotion and academia. Given the staggering number of people whose personal stake in this space covers every human motive and perspective, the making of this part-exhibit-part-shrine may have been one of the most thankless jobs imaginable.

And yet the job has been done, with eloquence and a spare, stark restraint that is poetic. Visiting the museum is no easy task. As Shakespeare said, if you have tears to shed, prepare to shed them now. But visit you should, and, yes, there is something that a camera can capture there without being crass or irreverent. The designers have seen to it. 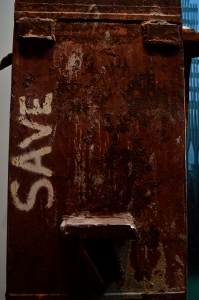 Firstly, they have guaranteed that the main central exhibits of debris, personal documents, voice messages and news video are completely off-limits to any kind of photography. Walk in there, and you’ll know why. Those who accidentally caught this epic horror in the moment of its occurrence will never be equaled or surpassed by anyone taking a casual snap on a smartphone anyway, and trying to do so would be like setting off sparklers at a requiem mass.

No, the real photographic opportunities are in the dark, cavernous spaces under the surface of the street, dim caves that make you feel as if you yourself, are, for a moment, trapped, running out of light and time. The enormous foundation known as the slurry wall, which, in surviving the titanic forces of the towers’ collapse, kept the Hudson River from flooding all of lower Manhattan. The rusted girder that, like a day-glo-autographed tombstone, bears the signature of every working company of first responders that slaved away at Ground Zero, first as rescuers, next as salvagers, always as heroes.

It is here, in the quiet arrangement of these incredibly scaled spaces, that the 9/11 Memorial Museum becomes more spiritual than any hour you will ever pass in church. It is in these dark, harrowing parts of the hall that you fully sense what a slender thread we all hang from, and understand that light and darkness struggle for the same real estate, now as then.

This entry was posted on June 15, 2015 by Michael Perkins. It was filed under 24mm, Architecture, Available Light, Composition, Galleries, History, low light, Memorials and was tagged with 24mm, 9/11, Exhibit, lowlight, Memorial, Museum, Shrine.