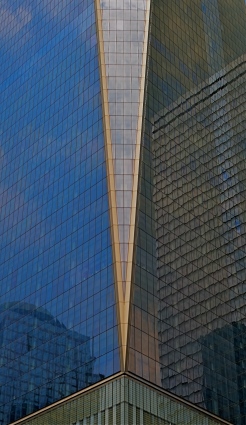 Icoceles, 2015. Up close or far away, the World Trade Center is a show unto itself.

THE SKYLINE OF NEW YORK CITY, if you think about it a bit, is almost like a bar graph in steel and stone.

Just as higher and lower bars on a business graph chart the successes and failures of a company or stock, so do the vertical surgings above Manhattan island track the ebb and flow of energy, of the life flow of the most amazing metropolis on earth. And for photographers, the Apple’s skyline is always news. Someone is moving up. Someone else is moving down, or over. There’s always a new kid on the block, and that means that the photographic story of New York must be re-imagined yet again.

New York buildings create context for themselves and for the city at large, as the fresh arrivals jostle in and try to mingle with their more historically landed neighbors. That process is always exciting, but the rebirth of the part of lower Manhattan scarred and scorched by the hateful events of 9/11/01 brings more than just a new crop of jutting profiles. It brings one of the most powerful symbols of resurrection in the modern age. To paraphrase the song lyric, America proved, on that most battered of battlegrounds, that, if we could make it there, we could make it anywhere, and the nation at large stood a little taller with the arrival of the new World Trade Center.

Cameras now idealize that which is already miraculous, and WTC One, visible from anywhere in the city, will create its own photographic history, or, rather, make it irresistible for photographers to try to write it themselves. Postcard views, neighborhood contrasts, abstractions, souvenir snaps…all will be the story and none will be the story, at least not the whole story. New York is always ready for her close-up, but the challenge is always, are you good enough to shoot her best side?

Photographers visit New York to size themselves up in their own bar graph of pass/fail/maybe. Like everyone who ever stepped off a Port Authority bus fresh off the farm, they ask themselves: am I good? According to whom? Compared to what? Can I make something last as I create images of a city that not only never sleeps, but never even slows down?

“Autumn in New York. It’s good to live it again….”

This entry was posted on September 11, 2015 by Michael Perkins. It was filed under America, Design, Neighborhoods, New York, Viewpoint .