ANYONE WHO’S SLOGGED THROUGH MORE A FEW OF THESE DISPATCHES knows all too well that I am a passionate preacher for shooting images completely on manual, not because it’s a more “pure” form of photography (and thus deserving of nobility and praise), but because I prefer to exercise as much personal control as possible. This, again, is not a quality judgement, since amazing pictures are made every day with the use of either complete or partial automodes. I just feel that I, personally, learn more by trying more, and manual settings place so much direct pressure on me to innovate and experiment that even my gross failures serve as education.

The mode known in Nikon as Aperture Priority (“Av” on Canons) is the only semi-auto mode I use with any regularity, and always because I make an educated guess, before going on a shoot, about what conditions will likely prevail. AP allows you to manually dial in your aperture on those occasions when you want a uniform depth of field in everything you’re shooting, with your camera metering light on the fly and providing the shutter speed you need for a correct exposure. AP tend to be a rare bird for me because, in many cases, I am not shooting so fast that I can’t pause at least a few seconds between frames to dial in every exposure factor. However, there are cases when the technology gives you a decided edge.

Landscapes, especially in rapidly variable weather, call upon the shooter to react to conditions that could last, at best, for only seconds at a time. When skies are crystal clear and you have ample time to set up a shot, then, by all means, rely on your own experience shooting on full manual. If, however, you are moving and shooting quickly from dark to medium to extreme light and back again, then you might consider AP as a way to cut your reaction time in half. At this point, full manual may be costing you shots rather than making them better. 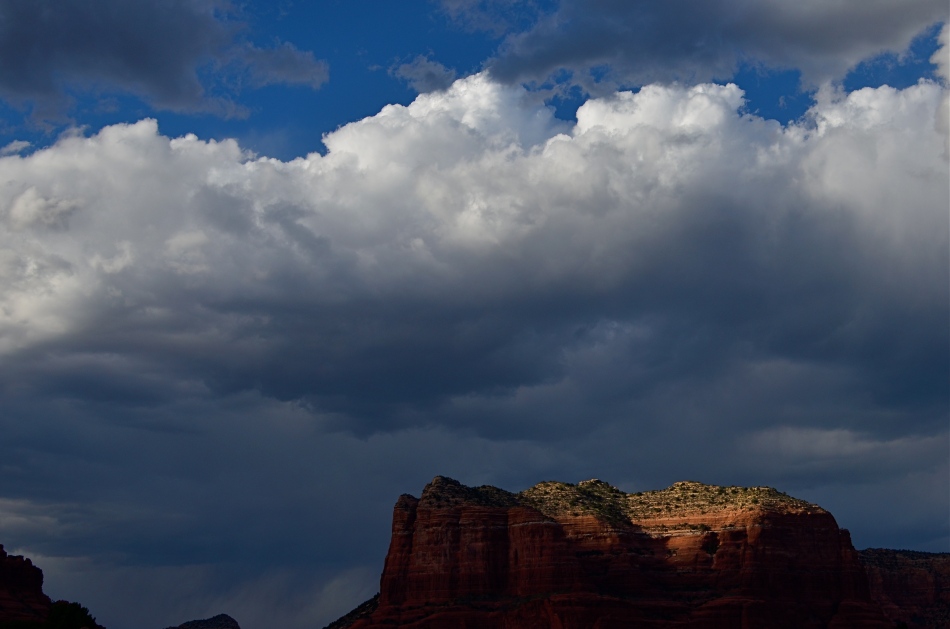 On the day the above image was taken, the town of Sedona, a miraculous array of red-tinged mountains in northern Arizona, was colored variously by a swiftly shifting broken cloud cover. One moment, the crest of a butte might take on a crimson glow, then be swallowed in shadow just moments later, with the gulch next door temporary hyper-lit in the same fashion. The clouds over Sedona were also backed by a decent headwind, shortening the stretches between scene changes even more. Moreover, the sunlight added a ton of contrast to the clouds themselves, making the sky a more attractive compositional component, with typically indistinct shapes rendered more sharply (because contrast is sharpness, right?).

As a result, the combination of light you see in this shot lasted exactly fifteen seconds, so, if I had paused to shoot a couple of trial frames on manual, just to try to nail the lighting, I likely would have missed this moment completely. Again, at this point, assist modes ain’t a compromise; they’re strategy.

The best practice is to anticipate, as much as possible, where you’ll be shooting and what the “game on the ground” is likely to be. Fashion shooters, journalists and other pros swear by Aperture Priority as insurance against lost shots. You may almost certainly find that to be true for some situations yourself . But the name of the game is Get The Picture, so, at the end of the day, the mode that makes you smile is the “right” mode. And don’t let nobody tell you no differnt.

This entry was posted on May 19, 2016 by Michael Perkins. It was filed under Aperture Priority, Available Light, Contrast, Depth Of Field, Shutter speed and was tagged with Aperture Priority, automodes, DOF, landscape photography, manual mode.