THE HISTORY OF PHOTOGRAPHY IS ALSO THE HISTORY OF A STRANGELY INTIMATE DANCE WITH DEATH, a fascination with its look, its effects, its ability to transform both man and materials, mood and matter. From the first images of combat in the mid-nineteenth century to today’s Instagram chronicles of turmoil and trauma, we have tried to testify about how the world changes when we, or others like us, pass out of existence. The process is a constant rug-of-war between intimacy and publicity, between the glare of public destruction and the privacy of inner oblivion. And the pictures that result are arguments, quarrels with ourselves, which can never truly be settled.

There seems to have been a shift over the past few decades in how we grieve, or at least in the visual vocabulary of that grief that we choose to put on display. The quiet graveside memorials of eras past seems to have been supplanted by increasingly public vigils. We cry our tears in front of each other now, and the creation of instantaneous, group-generated shrines has become a bizarre kind of performance art, as visible as graffiti, and as personal as each man’s ending. Whether it takes the form of mountains of teddy bears stacked around an accident site or candle-lit collages of mementos offering mute testimony from well-meaning strangers, mourning is now something we experience globally, tribally. John Donne’s 1624 sentiment that “every man’s death diminishes me” seems, in the present day, eerily prescient. 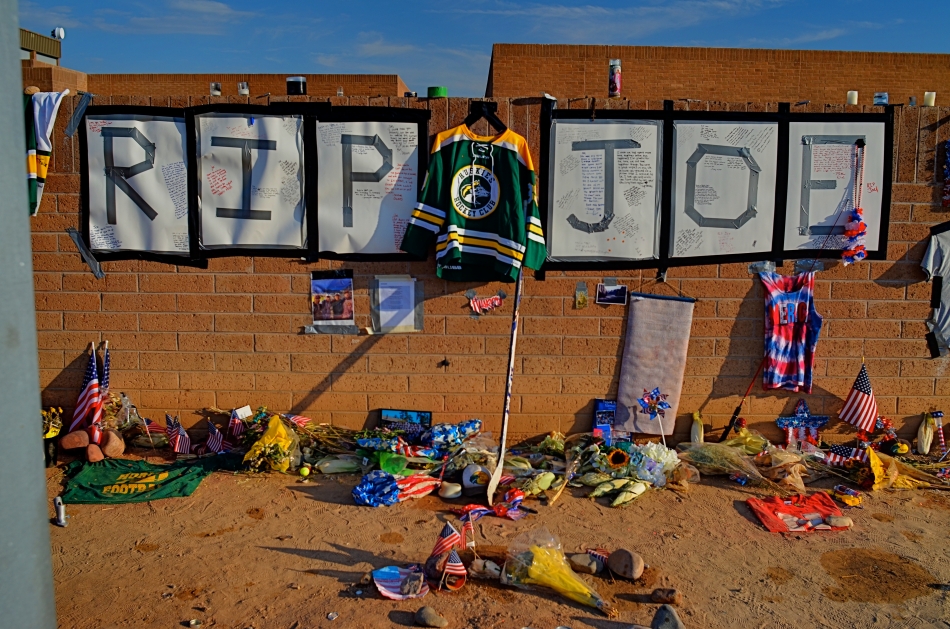 Flags, plaques, praise, prizes. Does all this add up to a life?

I recently drove past an improvised memorial for a deceased high school student. I knew nothing of his life beyond what his friends decided to collect to mark its passing. And so, visually, I was presented with a puzzle. What specific articles can be used to symbolize a life? Conversely, what should be excluded? How does an object that says something for one person presume to speak for he who has been silenced?

I made the shot you see here in as plain and reportorial a fashion as I could, shooting it head-on, in the manner of Walker Evan’s iconic images of signs and posters from the 1930’s. The only interpretive factor here, really, is the light in which I chose to shoot, deciding that sunset would help boost texture in the shot, and, incidentally, serve as a kind of metaphor. Make of that what you will.

Some pictures don’t need people in them to speak loudly for them. Today’s collectively assembled registries of loss are, in themselves, interpretive statements, not unlike paintings, editorials, or eulogies. Acknowledging them in pictures seems less like invasion and more like reportage, since they are clearly designed to be seen, to bear witness. The fact that they are anonymous makes them intriguing. The fact that they are so intensely personal makes them photographically essential.

This entry was posted on June 26, 2016 by Michael Perkins. It was filed under Americana, Available Light, Composition, Conception, Documentary and was tagged with Commentary, editorial photography, photojournalism, popular culture, trends.