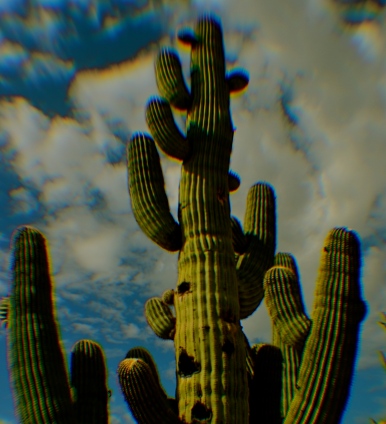 Extreme chromatic aberration (color fringeing) along the exterior line of the cactus.

THE RESURRECTION, ABOUT TWENTY-FIVE YEARS AGO, of several low-end, cold-war-era plastic cameras as refurbished instruments of a kind of  instinctual “art” photography has influenced even the digital and high-end photo markets, with light-leaking, optically sloppy toys like the Holga, the Diana and other “lomographic” devices shaking up the way many photographers see the world. Thus have these technically challenged little cameras, designed as children’s playthings, changed the conversation about what kind of formerly dreaded optical flaws we now elect to put back in to our work. Lomo shooters’ devotion to their craft has also meant a reprieve of sorts for film, since theirs in an analog realm.

But even digital shooters who don’t think of themselves as part of the “lomography” trip can dip a toe into the pool if they like, with filters on phone apps labelled “toy camera” which simulate light leaks, film-era “cross-processing” and the color variations caused by cheap plastic lenses. There are also companies like Lensbaby that manufacture all-new plastic optics designed to lend an element of creative control to what, in lomo cameras is largely random. The good news: you can, in effect, put defects into your pictures….on purpose.

Plastic lenses are generally much softer than glass lenses, giving a kind of gauzy appearance to your shots, so if you’re a fan of razor sharpness, they may not be your dish. More importantly, they produce a much higher amount of what is called “chromatic aberration”, which is more understandable under its nickname “color fringing”, since that more accurately describes how it looks. If you want a reasonably clear science-guy breakdown of CA, here’s a link to keep you busy this semester. The main take-home for most of us, though, is that the effect takes what would largely be a smoothly blended rendering of colors and makes them appear fractured, with the “fringe” look most noticeable along the peripheral edge of objects, where the colors seem to be separating like the ragged edge of an old scarf.

Why should you care? Well, mostly, you don’t have to. All lenses have a degree of CA, but in the better-built ones it is nearly undetectable to the naked eye, and can be easily processed away in Lightroom or a host of other editing suites. But people who are choosing to use plastic lenses will see it quite clearly, since such optics cause different wavelengths of light to “land” in the focal plane at slightly different speeds, meaning that, in essence, they fail to smoothly blend, hence the “fringing” effect.

Of course, chromatic aberration may be exactly the look you’re going for, if you want to create a kind of lo-fi, primitive look to your shots. In the cactus photo seen here, for example, taken with an all new plastic “art” lens, I found that the effect resembled old color printing processes associated with early postcards, and, for that particular image, I can live with it. Other times I would avoid it like the plague.

Plastic lenses, like any other add-ons or toys, come with their own pluses and minuses. Hey, if you’re a ketchup person, then soak your plate with the stuff. But if you believe that it just louses up a good steak, then push the bottle away. Just that simple.

This entry was posted on August 22, 2016 by Michael Perkins. It was filed under Lenses, Special Effects, Technique and was tagged with Chromatic aberration, Lensbaby, Lomography, optical flaws, plastic lenses.