AT WAR WITH THE OBVIOUS

“I had this notion of what I called a democratic way of looking around, that nothing was more or less important. It quickly came to be that I grew interested in photographing whatever was there, wherever I happened to be. For any reason.” –William Eggleston 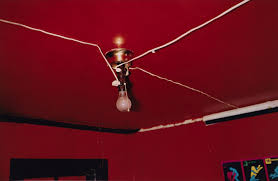 It’s a red ceiling. Don’t, says William Eggleston, look for anything else.

MOST PHOTOGRAPHERS ARE NOT PRIME MOVERS, in that the majority of us don’t personally carve out the foundations of new truths, but rather build on the foundations laid by others. Art consists of both revolutionaries and disciples, and the latter group is always the larger. With that in mind, it’s more than enough for an individual shooter to establish a single beachhead that points the way for those who follow, and to be able to achieve two such breakthroughs is almost unheard of. Strangely, one of the photographers who did just that is, himself, also almost unheard of, at least outside of the intellectual elite.

William Eggleston (b. 1939) can correctly be credited as one of the major midwives of color photography at a time that it was still largely black and white’s unwanted stepchild. Great color work by others certainly preceded his own entry to the medium in 1965, but the limits of print technology, as well as a decidedly snobby bias toward monochrome by the world at large, slowed its adoption into artsy circle by decades. After modeling himself on the great b&w street shooters Robert Frank and Henri Cartier-Bresson, Eggleston practically stumbled into color, getting many of his first prints processed at ordinary drugstores rather than in his own darkroom. His accidental discovery of the dye-transfer color process on a lab’s price list sparked his curiosity, and he soon crossed over into brilliantly saturated transparencies, images bursting with radiant hues that were still a rarity even in major publications. Eggleston’s work was, suddenly, all about color. That was Revolution One.

Is it Eggelston’s job to provide the story context for this image? Or yours? or neither?

Revolution Two emerged when he stopped worrying about whether his pictures were “about” anything else. Eggleston began what he later termed his “war with the obvious”, eschewing the popular practice of using photographs to document or comment. His portfolios began to center on mundane subjects or street situations which fell beneath the notice of most other shooters. The fact that something was in the world was, for Eggleston, enough to warrant having a picture made of it. A street sign, an abandoned tricycle, a blood-red enameled ceiling..anything and everything was suddenly worth his attention.

Reaction in the photographic world was decidedly mixed. While John Szarkowski, the adventurous director of photography  at the New York Museum Of Modern Art, marveled at a talent he saw as “coming out of the blue”, making Eggleston only the second major color photographer to exhibit at MOMA, others called the work ugly, banal, meaningless. Even today, Eggleston’s subjects elicit reactions of “…so what??” from many viewers, as if someone told them the front end of a joke but omitted the punch line. “People always want to know when something was taken, where it was taken, and, God knows, why it was taken”, Eggleston remarked in one interview. “It gets really ridiculous. I mean, they’re right there, whatever they are.”

However, as can frequently happen in the long arc of photographic history, Eggleston’s work reverberates today in the images created by the Instantaneous Generation, the shoot-from-the-hip, instinctive shooters of the iPhone era who celebrate randomness and a certain hip detachment in their view of the world. As a consequence of Eggleston’s work, images have long since been freed of the prison of “relevance”, as people rightfully ask who is qualified to say what a picture is, or if there is any standard for photography at all. Thus does the obvious become a casualty of war.

This entry was posted on March 29, 2017 by Michael Perkins. It was filed under Abstract, Color, History, Museums and was tagged with Abstract Photography, MOMA, William Eggleston.