A FUNERAL AND A BIRTHDAY 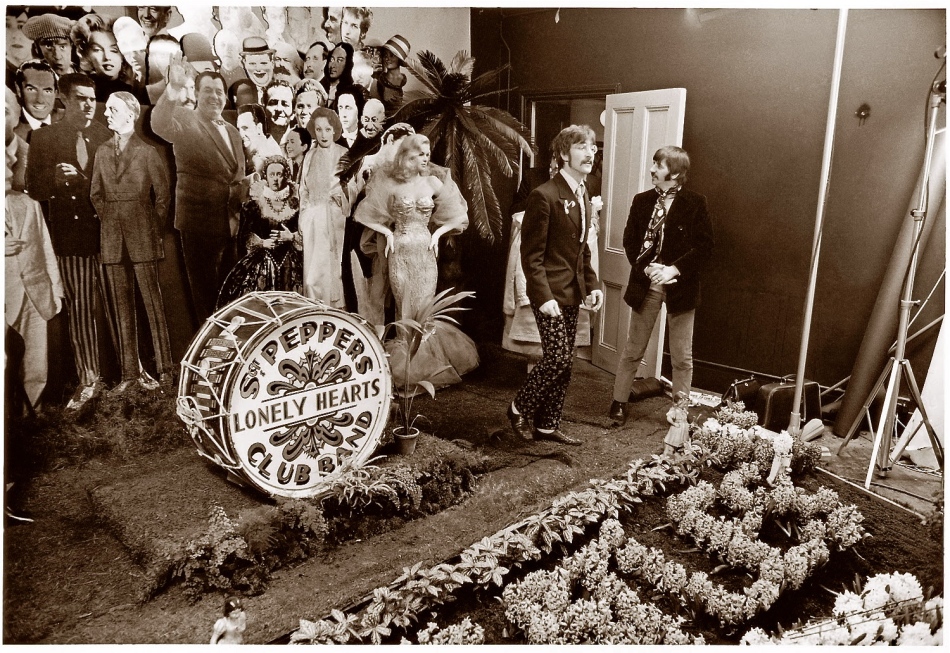 John Lennon and Ringo Starr inspect the assembly of the celebrity diorama that would be the main set piece for the Sgt. Pepper album cover, 1967.

ANY COMPLETE DISCUSSION OF THE LEGACY OF THE BEATLES‘ Sgt. Pepper’s Lonely Hearts Club Band, marking its fiftieth anniversary in 2017, will include voluminous analyses of its ground-breaking production technique and breakthrough approach to musical composition, and rightfully so. But this most fundamental of pop culture events of the 1960’s must also be thought of in purely visual terms, since many of us first encountered it as an amazing, challenging image.

In truth, the collaboration between Pop Art designer Peter Blake and studio photographer Michael Cooper, with its ad-hoc gathering of cardboard celebrities grouped around a gravesite with the word BEATLES spelled out in blossoms, is the first act of a two-act play. The cover set the same audacious terms of engagement that the record inside the sleeve would abide by: Art and Music are what we say they are: We, the Beatles, are in complete charge of our music, our image, and our connection with the audience: we will not have “a” style, but will hybridize whatever schools of thought come to hand, from modes of composition to instruments to shifting patterns of Past, Present, and Future to coloring outside the lines of even our own culture. I read the news, today, oh, boy, and it said there are no more rules: there are no more walls. The stage can no longer hold us. Only the studio itself is vast  enough to contain what we have to say.

The cover of Sgt. Pepper made a stunning break with the accepted practices used by record labels to market their goods. Quite simply, the suits in the front office were no longer in charge of the pictures. And what of that picture, or, more accurately, that picture of pictures? Is it a tribute? A put-on? A serving of notice that the Beatles are dead, long live the Beatles? Yes, yes, and hell, yes. Pepper made it plain, once and for all, that album covers, which had begun in the 1930’s as basic advertising sleeves for the goods within, could be venerated, influential, and, yeah, framed on some freak’s wall. Like, you know, man, art.

And, if Cooper and Blake were drawing a line between eras for the record world, they were doing so to an even greater degree for photography, which, in 1967, was still considered by some as more craft than art. Within a few years after A Day In The Life‘s long, ringing super-chord, museums were mounting shows by Diane Arbus, Lee Friedlander, and Robert Frank, right alongside the painters, and directly adjacent to people like Warhol who constituted categories all their own.

Just as Alice In Wonderland is somehow legless without John Tenniel’s illustrations, Sgt. Pepper’s’ outside will always be wedded to its inside, and vice versa. As the most popular multimedia product in commercial history, it owes much of its titanic impact to the image of four oddly costumed men with four strangely new mustaches and one big message: there is more to us than meets the eye. Like the best of photography, the picture issues a challenge. Nothing is real.

And nothing to get hung about…….

This entry was posted on June 5, 2017 by Michael Perkins. It was filed under Essay, History, Popular Culture and was tagged with Beatles, Commercial Photography, Pop Music.