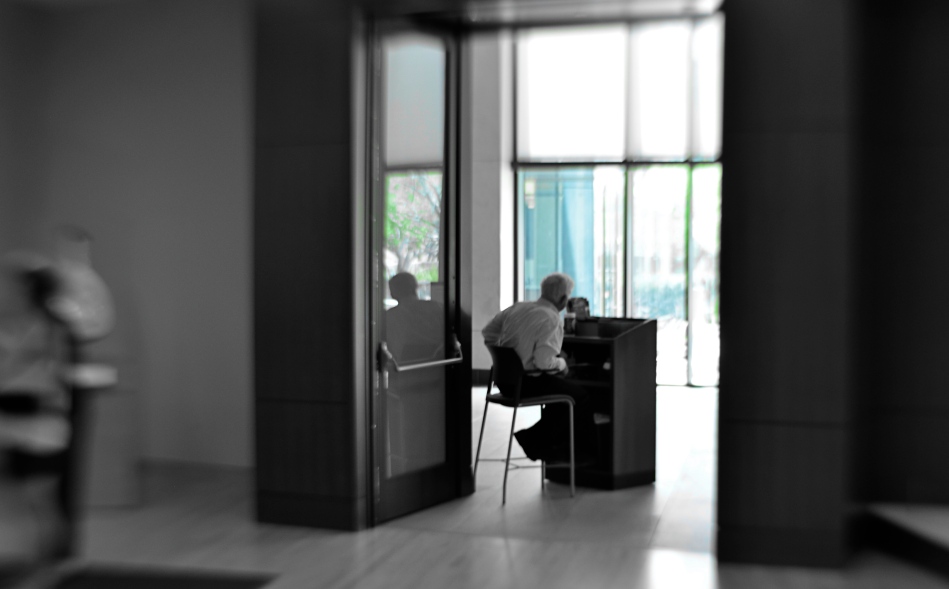 Can you judge this man’s mind from how he’s shown in the image?

PHOTOGRAPHY DEMONSTRATED, EARLY IN ITS HISTORY, that, despite the assumption that it was merely a recording device, it regarded “reality” as….overrated. Since those dawning daguerreotype  days, it has made every attempt possible to distort, lie about, or improve upon the actual world. There is no “real” in a photograph, only an arrangement between shooter and viewer, who, together, decide what the truth is.

So-called street photography is rife with what I call “reassigned value” when it comes to the depiction of people. Obviously, the heart of “street” is the raw observation of human stories as the photographer sees them, tight little tales of endeavor, adventure…even tragedy. However, the nature of the artist is not to merely document but also to interpret: he may use the camera to freeze the basic facts of a scene, but he will inevitably re-assign values to every part of it, from the players to the props. He becomes, in effect, a stage manager in the production of a small play.

In the above image you can see an example of this process. The man sitting at his assigned post at a museum gallery began as a simple visual record, but I obviously didn’t let the matter end there. Everything from the selective desaturation of color to the partial softening of focus is used to suggest more than what would be given in just a literal snap.

So what is the true nature of the man at the podium? Is he wistfully gazing out the distant window, or merely daydreaming? Is he regretful, or does he just suffer from sore feet? Is he chronically bored, or has his head in fact turned just because a patron asked him the direction of the restroom? And, most importantly, how can you creatively alter the perception of this (or any) scene merely by dealing the cards of technique in a slightly different shuffle?

Photographers traffic in the technical measure of the real, certainly. But they’re not chained to it. The bonds are only as steadfast as the limit of our imagination, or the terms of the dialogue we want with the world at large.

This entry was posted on June 25, 2017 by Michael Perkins. It was filed under Effects, Experimentation, Interpretation and was tagged with Editing, Selective focus, Street Photography.