OTHER KINDS OF FACES

AS A SON, I am extremely aware that my parents are in the final innings of their particular ballgame, a journey they began nearly sixty-seven years ago and a pairing that has defined their lives along with those of countless others. And, as a photographer, I have come to realize that every phase of Mother and Dad’s time together has produced its own unique visual treasures and challenges.

The images that are made of them these days….congratulatory parties, miraculous birthdays, mythic anniversaries….are repeats of similar occasions spanning decades, even as they are also emotional re-castings of old roles. Such pictures are both records of what has been and chronicles of what remains. For both Mother and Dad, steps do indeed come slower these days, but memories still move at light speed. Physical age and emotional wisdom conduct an ongoing tug-of-war across all their days. Making photographs of this process is tricky.

I know that, when my camera is too visibly present, it creates discomfort for them. For a variety of reasons that may include merely being over it all, they are not keen on the idea of “sitting for portraits”. I can best respect this by seizing other kinds of moments, in other kinds of ways. 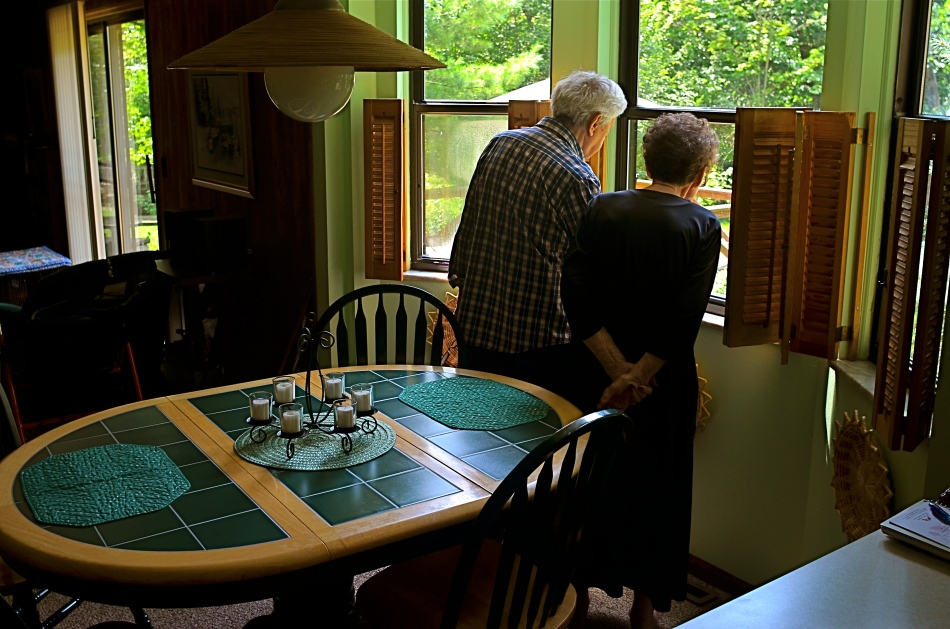 Recently, I caught a very lucky break, when they both went to their kitchen window to look over their beloved back yard, the acre lot resplendent with the tree plantings, deck buildings, and family events they’ve staged in it over more than a third of a century. Certainly, I don’t always instantly comprehend the value of a shot in the moment, but this one was obvious enough for even me.

There, in the moment, was the entire marriage in miniature: two people seeking, dreaming, discovering in tandem. No shy faces or self-conscious “say cheese” moments were needed to photograph their twinned hopes, their linked optimism. You can’t see their features, but these two people are unmistakably my parents.

Faces are remarkable documents, but they aren’t the only ones available to a photographer. That’s because there are a million tiny ways for humans to visually register emotional truth, a universe full of little grace moves that, singly or collectively, convey identity. My parents, like everyone’s, are eloquent, even when they do not stare into the camera to make their testimony.

This entry was posted on August 24, 2017 by Michael Perkins. It was filed under Candid, Conception, Interpretation, Portraits and was tagged with Portraiture, Unposed.