MANY PHOTOGRAPHERS ARRIVE AT WHAT I CALL a minimalist reset, evolving in their technique to the point at which they can do more varied work with fewer tools. This process leads many to designate a personal “go-to” lens, the chunk of glass that solves nearly every problem on a given shooting day by itself.  I’ve tried to take this a step further, going from ” what one lens do I most need today?” to “what one lens can I probably use for everything, nearly every day?”, a lens so flexible that I’d actually have to have a very good reason not to use it on any given day. To express it another way, instead of thinking of a “go-to” lens, I’ve tended to work toward finding a “leave-on” lens. 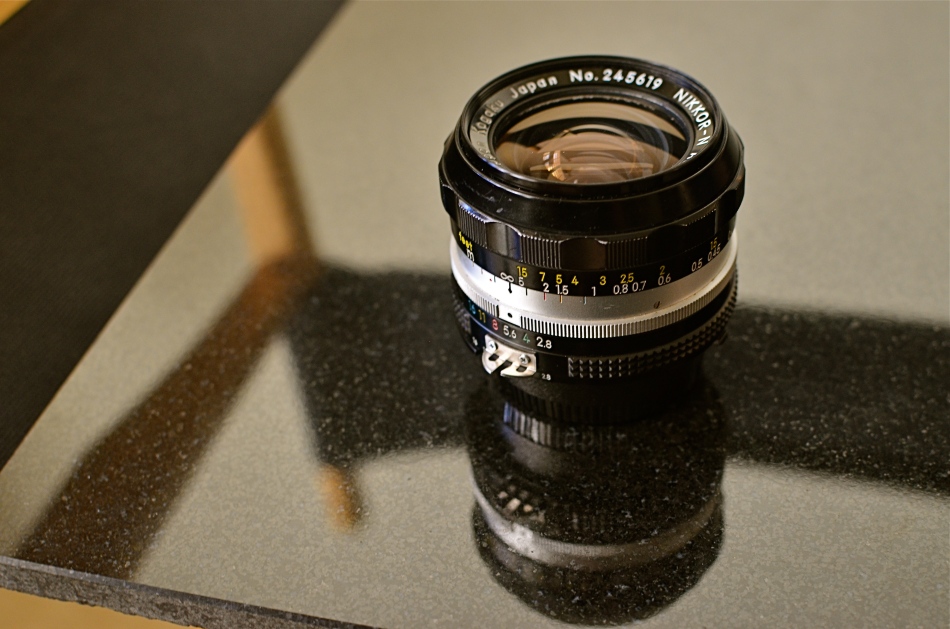 My “Levon” is the venerable Nikon 24mm f/2.8, in production continuously from 1967 (about when mine was made) to the present as  a metal-barreled, fully manual lens. There is a cheaper, plastic autofocus version also available, but optics are generally the same. That is to say, damned sharp and damned fast. Both lenses are extremely compact and thus easy to lug about.

24mm is correctly called an “ultra-wide angle”, but I originally switched to it from something even wider, the ubiquitous 18-55mm “kit lens” most Nikons ship with these days. Doing a lot of shooting in big cities with crowded streets, I originally thrilled to just how much the 18 could cram into a frame. Eventually, however, I came to hate the severely in-bent slant on tall structures, and the fact that the 18, wide open, is pretty slow, at a max aperture of f/3.5. With the 24, I still get plenty of more natural-looking width and another fat half-stop of light in the bargain.

Handheld night scenes make up about a third of my urban shooting, and, here again, the 24 is Mikey’s Best Friend. Its manual focusing means my camera never spazzes in search of a focus lock in the dark, allowing me to actually shoot faster. And city scenes can be sharp even wide open at f/2.8, giving me crisp results from 12 feet all the way to just under 50, and from 17 feet pretty much to infinity. Combine that with a fairly low ISO like 800, and I can even keep the grain down.

Being a prime lens, the 24mm can’t zoom, but outside of occasional nature work, I seldom need a telephoto, so you don’t miss what you don’t use: another reason to leave the 18-55 home. Besides, primes, being optically simpler, are usually sharper, meaning it looks better than the kit lens dialed to 24mm. Finally, Levon is not a macro, but focuses at just one foot out, so some modest close-up work is feasible.

Standard disclaimer: this analysis is offered not to claim that any one lens is perfect for any one person. It’s just an exercise to show how, for the way I shoot, I have been able to do over 75% of my typical work without swapping out glass. I gain speed, ease, and flexibility in the process, and, if you conduct your own experiments, chances are you too can progressively spend less time fiddling and more time shooting.

This entry was posted on August 28, 2017 by Michael Perkins. It was filed under 24mm, Aperture, f/stop and was tagged with "Go-to" lens, Optics, wide-angle lenses.