IT HAPPENED RIGHT HERE. DIDN’T IT?

After The End, Before The Finish (2017). The back porch to Virginia City, Nevada, once one of the richest towns on the face of the earth.

AMERICA HAS NO LOVE OF INTERMEDIATE CHAPTERS. We’re big fans on huge, new beginnings of things. We are likewise fascinated by catastrophic finales. By contrast, the stories that take place between the first and last episodes of things are like flyover cities between the coasts.

Consequently, we tend to generate photographic tonnage when the Bright Shiny New Mall cuts its opening day ribbon, and crank lots of frames on the day the Sad Old Mall is razed to the ground, but not much quotidian stuff. There may indeed be less drama in the day-to-day goings-on in towns, public works, and other human endeavors. or maybe we just bore easily. Or maybe we haven’t learned to detect the tiny stories that rise and fall between the more obvious bookends of history.

Boom and Bust are big news to photographers. Humming Along Normally, not so much. 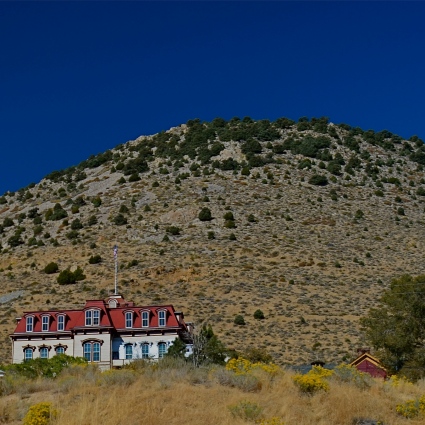 Virginia City, Nevada typifies what Americans call Ghost Towns, places which ran their life cycle from explosion to collapse but still physically exist in some way. Some are mere hollowed-out ruins crumbling in the dust, while others, like Virginia City, have survived as commercial entities (spelled: tourist traps) selling nostalgia. They make money recalling how they used to make money, which, in the case of V.C., was mining silver. This little bus stop of a town was once one of the wealthiest places on the planet, ripping ore out of the ground and sending it all over the world at a rate that minted a new millionaire every few minutes. Virginia City had its own short line railroad making freight runs hundreds of times each day. Its well-heeled lords imported materials from every continent to appoint opera houses, churches, hotels and saloons with glitter and grandeur. And the city created one of the most progressive elementary schools in the nation, equipped with central heating, flush toilets, water fountains, and individual student desks….in 1876.

Ghost towns are the walk-through museums, the pickled cadavers of American life. They’re finished but they aren’t through. There is a bright coat of paint replicating the gaiety of better times, but, beyond the fro-yo stands, ersatz whiskey joints and souvenir shoppes, the skeleton of a very different daily life is still visible. And a well-aimed camera can still summon a degree of Boom within the Bust.

This entry was posted on October 25, 2017 by Michael Perkins. It was filed under Americana, Architecture, Cities, History and was tagged with documentary photography, Museums, tourism.