SOME THINGS CANNOT BE MADE VISUALLY COHERENT merely by pointing a camera at them. That is, all subjects won’t give up their secrets to the mere act of photographic recording. And that’s when mere documentation must give way to interpretation.

There is probably no denser concentration of immersive marketing on earth than in the yawning canyons of New York City’s Times Square, a cacophonous minefield of flashing, spinning, exploding LED overload. Messages aren’t simply or singly sent or received here: rather, they elbow past each other by the hundreds, desperately contending for the viewer’s attention in microbursts of insane color and absurd scale, in what actually amounts to the dead opposite of communication. Billboards, marquees and crass chunks of street theatre, from ersatz Miss Liberties to pose-with-me Batmen, all scream and stream at once, sending the senses careening from sensation to sensation like pinballs on ampthetamines. The irony: nobody wins the race: messages all eventually fail to register, cascading in a blur like a flipped deck of cards. 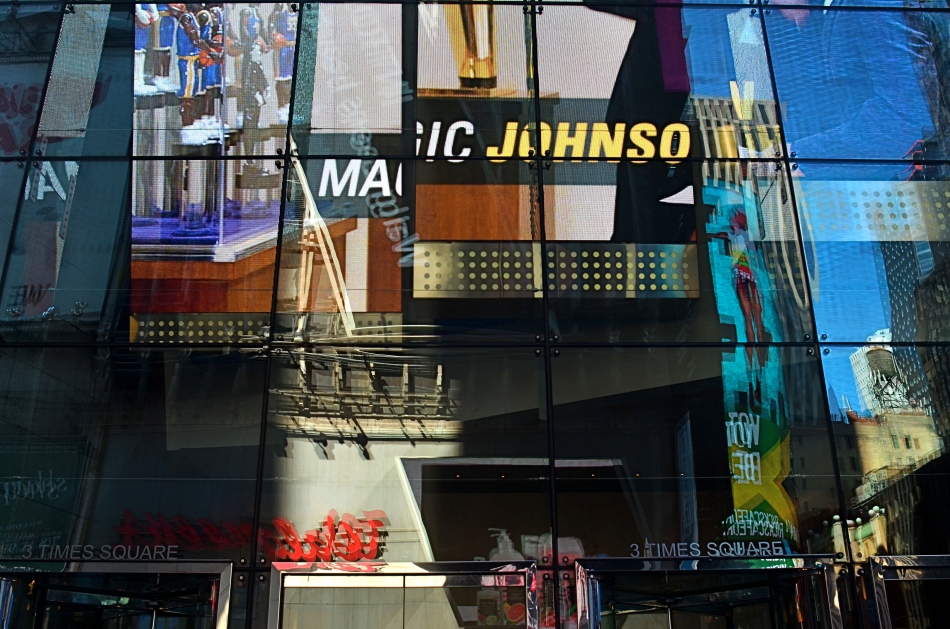 This is why, for a Times Square-type subject , “straight” photography is doomed to disappoint. It’s just not enough to convey the feeling of fragmentation created by the site’s sensory bombardment. Merely freezing the action with one’s camera is an attempt to “make sense” of a reality that is, by definition, non-sensical. We don’t need to slow things down so they’re recognizable…..quite the opposite. We need instead to capture and comment on the confusion in a visual language we ourselves improvise.

In my own case, I try to further amp up the broken, shattered quality of the information that meets the eye by breaking pieces of data into even smaller pieces….a kind of double-reverse chaos. In the image seen here, I’ve turned away from a bright cluster of signs on one side of the street to shoot their reflections in a split-panel office window, forcing all the messaging from the signs into splintered abstractions, some of which come from shadows within the office itself.

This is, of course, just an example and not in any way a universal template. The precise method for creating a distortion of an already distorted reality isn’t paramount, but what I don’t want is a literal representation of these streets. Reality is in short supply in the Times Squares and Tokyos of the world. Photographers intent on commenting on that condition have to stay one step ahead, to find the double reverse chaos lurking within.

This entry was posted on July 15, 2018 by Michael Perkins. It was filed under Americana, Composition, Conception, New York and was tagged with Abstraction, Commentary, Surrealism.