THE WORD “APPROPRIATION” HAS BECOME A PERMANENT PART OF THE ACTIVE VOCABULARY OF  VISUAL ARTS, and I am never consistently sure how I feel about it.

Like the term “found object”, things labeled as “appropriated” from other works seem to cast a shadow over photography, or over its potential for originality. Can the artist ever really produce a thing that is completely new? And if so, does it make him dishonest to re-use something that’s been any part of someone else’s work? Can you generate an image that shows, for example, a frame from a motion picture that someone else directed? How about a random glimpse of a frozen moment from a television show? Are those who admire a painting in a gallery and snap an image of it plagiarists? Additionally, the entire web-era issue of intellectual property complicates the question even further. Even if a photographer’s motives in “appropriating” are artistically pure, is he/she creating a tribute….or perpetrating a theft?

I have seldom dipped my toe into this particular swamp, mostly since I want to create work that is as personally unique as possible. I certainly love the idea of “standing on the shoulders of giants”, but I don’t like to think that it’s because I’m too weak to walk under my own power. So let’s analyze an instance in which I try to straddle both sides of the tribute/theft debate. 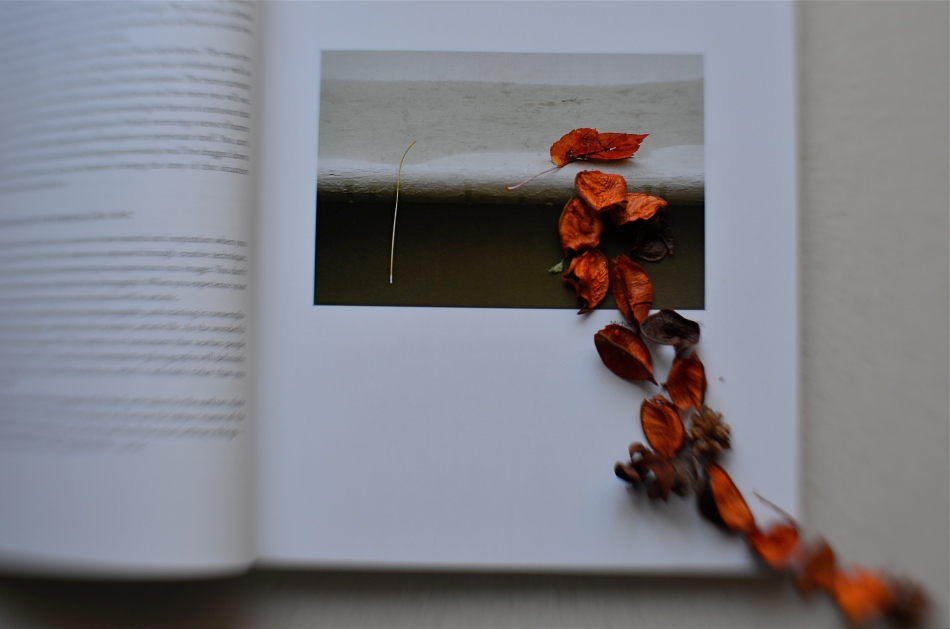 What you see here is a most particular exercise with a very specially selected image. The original picture, as seen within the page frame, is an illustration from The Practice Of Contemplative Photography by Andy Carr, a book designed to train the reader’s eye to see in less conventional ways, to examine the gulf between conception and perception. The authors, Andy Carr and Michael Wood, have deliberately set forth a series of exercises created to force photographers to develop alternatives method of seeing. What I glean from this is that they don’t want to hold any single photographic approach as sacred….perhaps even those they themselves put forward as artists.

The composite image seen here is an attempt to take Michael Wood’s beautiful picture, a minimalist shot which shows a single orange leaf balanced on a ledge, and imagine what kind of picture might be a visual sequel to it. I used a Lensbaby Sweet 35 optic to keep the original photo’s sharp focus on his leaf, which, as it trails down the stream of added orange potpourri pieces, transitions to softness….as if, in a dream, the leaves might be seeming to erupt out of the page. So, if you’re keeping score, the starting photograph is shown in the context of the book in which it originally appeared, with added objects that I have arranged for a new overall photo-creation of my own. Please note that in every single posting of this picture, I have given specific credit to the original artists/authors, and represented it as an appropriation, the use of elements not my own for a re-imaging that is my own. I would never seek credit for the original Wood image: it did serve, of course, as a springboard for something else. And, if at some time, I am asked by said creator to remove any and all traces of my composite from public platforms, I would acquiesce immediately.

Ever since Warhol began making silkscreens of photographs shot by other artists, which he then showed as Warhol “works”, this argument has mostly led to…..more arguments. And, as stated, I seldom find myself in this particular playpen. It’s simply too tough to be sure of all my motivations.

This entry was posted on October 6, 2018 by Michael Perkins. It was filed under Abstract, Conception, Technique and was tagged with Adaptation, Appropriation, surreal.