LET’S SEE WHAT SHE’LL DO…

COMBINE THE ANTICIPATION OF CHRISTMAS with a severe lesson in humility and you’ve described the process involved in exposing a roll of film in an old camera that may or may not operate properly. The “Christmas” part, that deliciously torturous anticipation that came, in analog days, from sending one’s film away to a lab, for up to a week before reviewing your results, is something that everyone of a certain, ahem, age can relate to. The humility (humiliation?) part comes when the package of finished prints arrives in the mail and your dreams crash up against the Great Wall Of Reality…delineating that ugly gap between what you saw and what you managed to capture.

I always collect older cameras that are at least technically “operational”. They click and clack the way they’re supposed to. Frequently, they spend their time as lovely museum pieces, but, on occasion, I will invest a little money to see if they are truly functional and if I can make them make pictures of any degree of quality. It’s a fairly costly operation, since older film sizes can be expensive (if they can be found at all) , and the list of qualified practitioners of the filmic lab arts is shorter with every passing year. As to how I evaluate the results, that can depend on the camera. If it’s an old Brownie and the images aren’t too good, I can’t really fault myself, since there wasn’t a lot of control I could bring to the process of a one-button box. In the most recent case, however, I was testing a Kodak Bantam Special, a fairly deluxe device that cost nearly $90 dollars in 1936 and featured a rangefinder, widely variable shutter speeds and a fairly fast f/2 lens. So in shoving a roll of extremely scarce 828 film (a bygone size with a negative slightly larger than 35mm) through the works, there were two things to determine: whether I could master the camera with a test base of only eight exposures and whether the camera was still able to perform. 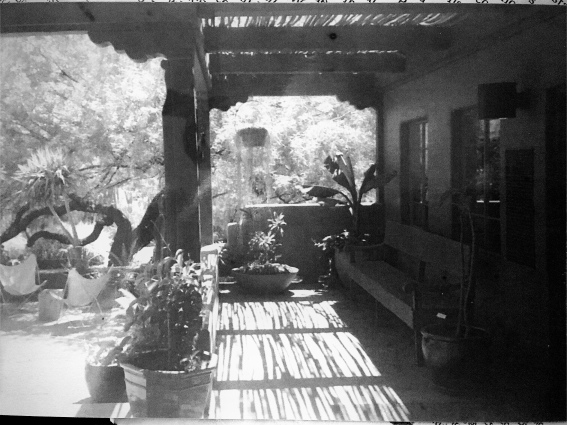 A frame from a Bantam test roll, adjusted, let us say, liberally.

One of the dozens of designs created by Walter Dorwin Teague during his time with Eastman Kodak, the Bantam Special has been called by many the most beautiful camera ever made. Now, while that may be aesthetically true, it’s an ergonomic nightmare, with controls jammed very, very close together, making it easy for ham-fisted users like me to fumble, lose their grip, even adjust one control when they think they’re working on another. In the case of this particular Bantam, most of the test roll revealed that the collapsible bellows on the camera leaks light like a sieve, producing wispy streaks across most of the frames. In other good news, the color rendition was very low contrast, with most hues having a decidedly bluish cast. Underexposure was also extremely easy, even with 400 speed film and wider apertures. And while that’s probably a mixture of old mechanics and my own poor calculation, the only way I could make the frame at left (one of the “keepers”) passable was to artificially tweak the contrast  and convert it to monochrome after the fact. And that, again, is the “humility” part of our program, innit?

Moral of the story: If you ever find yourself getting cocky with the utterly cheap comfort of the digital age, take a time trip to the era when even the best laid-plans of mice and men often resulted in “what the hell?” pictures. Maybe the most enjoyable thing about shooting film, at this stage of the game, is knowing you can stop shooting film any time you want to.

This entry was posted on February 13, 2019 by Michael Perkins. It was filed under Black & White, cameras, Film, Kodak and was tagged with antique cameras, Bantam Special, roll film.