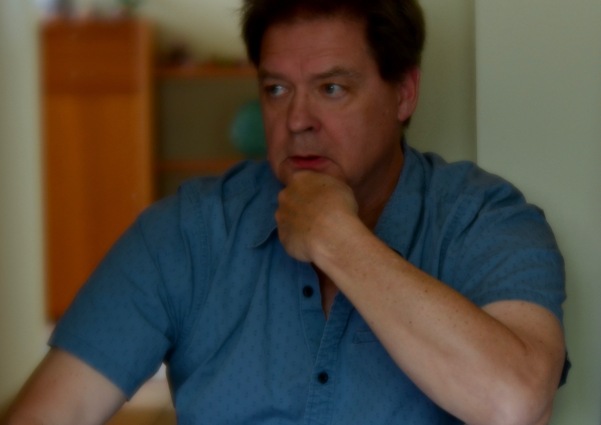 The author, in a typical moment of consternation.

THE OLDER I BECOME, both as a person and as a photographer, I wonder if there truly is any such thing as a “self-portrait”. Of course, I don’t doubt that it’s technically easier than ever to record one’s own image in a photograph. What I do doubt is whether the term portrait is a valid one when applied to oneself. Simply, can we be objective enough to accurately interpret who we are with a camera that we ourselves wield?

Now, bear with me. This isn’t as hippy-dippy as it sounds.

Many of us can recall the first time we heard out recorded voice played back. Its sounded alien, untrue, outside ourselves, even abstract. Similarly, we have also disparaged other people’s attempts to “capture” us in a photograph, dismissing their efforts with “that doesn’t even look like me!” Does this mean that the other person’s camera somehow transformed us into a distortion of ourselves?  Or is it, rather, that we have an imperfect concept of what our actual appearance really is? But….okay, let’s suppose for a moment that everyone else in the world that takes our photo somehow doesn’t “get” us, that we, out of our vast knowledge of our own hearts and minds, are, in fact, the only person qualified to reveal ourselves in a photograph. All right, that being our theory, what are the real results of our having, especially in the current age, almost unlimited “do-overs” to get our pictures of ourselves “just right”?

After all, as much sheer practice as we have taking images of ourselves (and it is some real tonnage, folks), we should have reached some plateau of proficiency, some perfecting of process for telling our true story. But have we? Are you satisfied that your best, most authentic self resides in a picture that you yourself have taken? I know that, in my own case, I can only confirm that I have gotten better at producing a version of myself that I choose to represent me to the world. I have crafted a performance out of my own talent as a photographer that shows me in the most flattering light, portraying me, by turns, as thoughtful, funny, courageous, resilient, and whatever other recipe of herbs and spices flatter me most. But have any of these performances qualified as “portraits”? I can’t answer that question with complete confidence….and neither, I suspect, can many of you.

So is the “self-portrait” destined to be a beautifully concocted lie? Well, to a degree, yes, always. Those of us who apply an unflinching and honest eye to our own shortcomings and biases may occasionally approach the truth in the way we present ourselves to our own cameras. And a few of us will even achieve a kind of angelic honesty. And it will always, always be easy to have the whole process collapse in self-parody. But the point is this: given the sheer volume of “selfie” traffic loose in the modern world, we should at least try to break through our estrangements, our protective layers. A photograph can certainly be seductive even when it’s a lie. Sometimes because it’s a lie. But from time to time, it’s nice to take a gut check and see if we recall what the truth looks like as well.

This entry was posted on February 27, 2019 by Michael Perkins. It was filed under P.O.V., Self-Portrait, Selfie and was tagged with editorial photography, Interpretation.