COME TO THE DARK SIDE 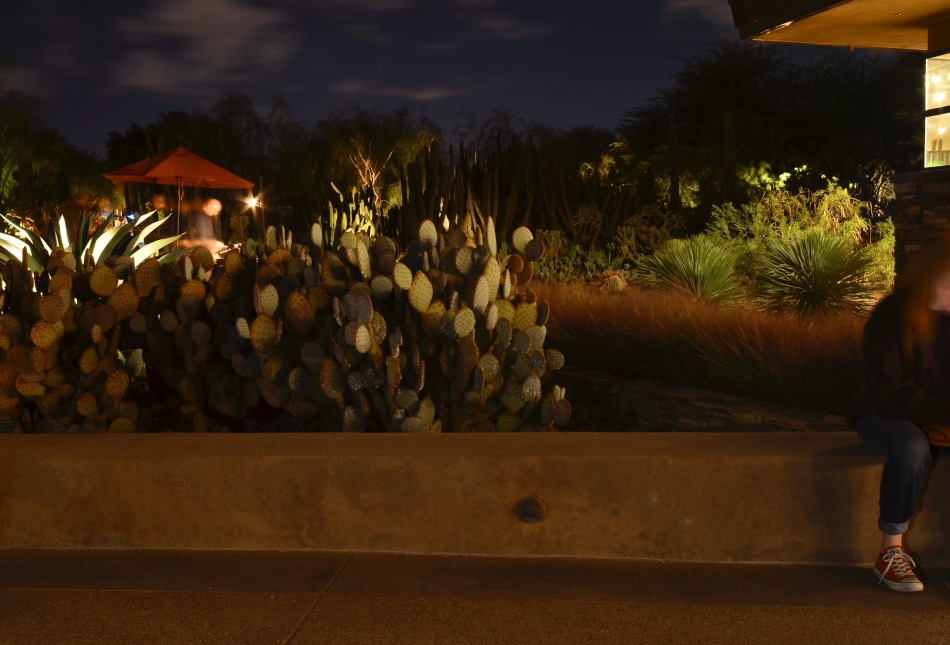 MY FATHER, SENSING THAT, AS A CHILD, I WAS ANXIOUS about turning out the lights at bedtime, explained calmly to me that there wasn’t anything in my darkened room that wasn’t there in the daytime as well.

It was a reasonable enough argument that I stopped thinking of my bed as a backstage repository for monsters. Still not sure about the inside of the closet, though.

Later, however, I was to realize that, in a sense, Dad was dead wrong in photographic terms, since all we really have to paint scenes with is light, a commodity which is drastically different before and after sundown.

One of the reasons I still take out the old tripod to bother with long night-time exposures is that the color relationships, and thus how we interpret the arrangement of light, are so very different than those seen in the day. We’re not just talking about the difference between lots of light and not much light. The way the colors fit with each other is vastly different when comparing night versus day. Imagine lighting your very favorite food until it takes on a hue so unnatural that you can no longer eat it. Consider pink peas, green steak, brown water….you get the idea. Now compare the daytime value of a color under natural light to its night-time equivalent, lit by either dying daylight or artificial illumination or some strange combination of both. I think the value of making comparative photos of objects over a variety of hours will stun you if you make the time for the exercise. It will also give you an amazing number of alternative choices for how you wish to render color, and under what circumstances.

We’ve all see those essays in which a photographer stays in one position along the rim of the Grand Canyon for many consecutive hours, interpreting the color and light shifts in the gorge over the course of a single day. But you don’t have schedule a vacation in Arizona to make your own demonstration of this idea. Anything that you think you know about, or know the “best” way to photograph, will make a good test subject. As a matter of fact, the more ordinary the scene, the better, since your evaluation of the results will force you to concentrate on just the light values alone, without excess distraction. For an example, the image seen here is of a desert botanical garden in the American southwest an hour after sunset. The sky as seen here is not brilliantly blue, but neither is it absolutely black. The concrete wall in front, beige during the day, is feeding off the sodium lights from the gift shoppe at right and registers as orange. The greens in the agaves and succulents are not the same tepid hue that they’d “read” in the afternoon, becoming something a bit more emerald-ish, while the shrubs are a more pronounced gold than they’d register at noon. More interestingly, all of the colors, transformed from the familiar, are now in a different dialogue with each other. Their relationships seem off, lending a slight surreality to the scene. I only wish I had thought ahead to take several more images spaced over an entire day to better demonstrate my point, although I know, from having done so in the past, that the contrasts can be quite dramatic.

Of course, the picture is not, in and of itself, anything to boast about, but it gives me a test pattern for similar shots in the future, shots for which I will really want to achieve a particular look. This also fits into my overall view of photography, which is that every shot is, in a sense, a rehearsal for another shot. So it sometimes seems that we take a lot of pictures that believe “don’t matter” to get the ones that do, only, paradoxically, if one photograph is a sketch for a later one, then indeed they all matter anyway.

This entry was posted on July 10, 2019 by Michael Perkins. It was filed under Available Light, low light, Time Exposures and was tagged with Long exposures, Night Exposure, Tripod.