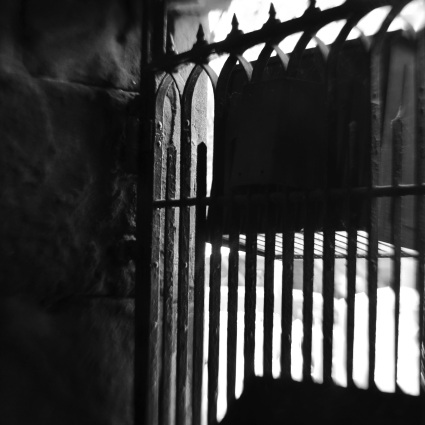 No admittance. This means you. But what else does it mean?

JUST AS NUMBERS AND LETTERS ARE SYMBOLIC OF THINGS LARGER THAN THEMSELVES, cues in photography act as a visual vocabulary, a kind of shorthand for more complex ideas. This way of showing ideas through a commonly recognized series of signals means we don’t always have to explain everything from scratch every time we create a picture. In order to convey the idea of a train, we don’t have to show the entire history or design of locomotives: a railroad crossing sign sells the concept immediately. And so, as storytellers. we use symbols to get to the point faster, and, nearly two centuries into our shared art, the shortcuts get more compact and more immediate with the passage of time.

One of the ideas that we convey in this way is the idea of limits or barriers, especially images that show confinement or limited admittance. Signs, lights, gates, traffic cones, warning signals, all convey a ton of information in a short space of time…everything from beware to keep out. These cues also allow a photograph to be all shorthand, to be about the limit or barrier. The image seen here adequately conveys the idea of a physical limit with a very meager amount of data. Even resolution itself has been relaxed, leaving just the suggestion of textures that are typically rendered in fine detail. There are no clearly readable signs, no clue to what the viewer is being kept from, no idea of whether the gate represents safety or repression. And while this symbol conveys a limit on our movement; everything else is open to interpretation. In some cases, not revealing what lies beyond the gate may make for a more intriguing image than if the photographer were to show everything in full. The beauty of this process is that most photographic ideas can be expressed with a very spare inventory of information, as our eyes have learned, over years, to see interpretively, enabling us to decode what the photographer as encoded. It’s a very intimate relationship.

All of which, I believe, argues for making your picture’s case in as few strokes as possible. We still pay more attention to framing, i.e., what fits in the rectangle, versus composition, or the arrangement and selection process within the borders of our pictures. We sometimes overcrowd and oversell messages which may be conveyed more effectively with much less information. Learning how to say more with less comes slowly; we need to build up a substantial log of attempts before we can begin to tweeze out the most effective amongst them. But that is the difference, as we often say, between taking a picture and making one, or the difference between pictures that are merely nice and those that are essential.

This entry was posted on December 4, 2019 by Michael Perkins. It was filed under Black & White, Composition, Conception and was tagged with Framing, narrative effect.