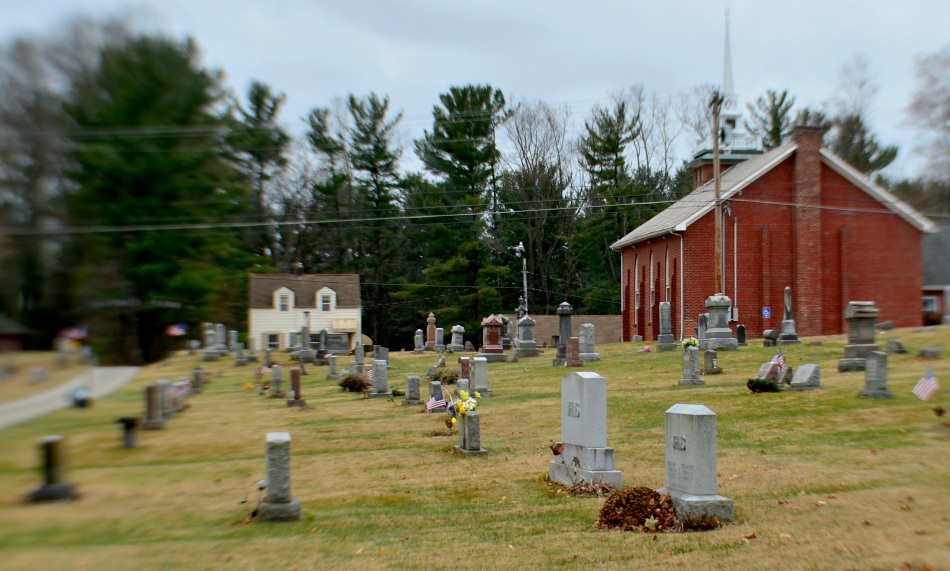 THERE ARE STILL PLACES ACROSS AMERICA where all the needs of life seem to be concentrated into very compact spaces. Small towns where the eating places, the living places, working places, worshiping places and dying places are all within a few blocks of each other, all of them viewable, knowable to everyone, all the time. The unchecked sprawl of modern life has left such villages behind, so isolated that they may as well be contained within a snow globe, their functions blended together like a box of inter-melted crayons. In such towns, photographs of a very different nature can be made.

The idea of a local main street moving seamlessly from the business section to residential houses to graveyards to a children’s playground now runs counter to the way we plan things. In little cities all functions orbit each other tightly, like animals sharing the same watering hole. Maybe some of these burgs were, originally, just that….replenishment stops, a place to change horses, grab a meal before heading back onto the trail, a collection point for outlying farms or ranches. In terms of the images that can be created in these out-of-the-way places, they are chronicles of a different kind of rhythm. They simply have to result in different kinds of pictures.

In traveling through such towns, I invariably stop at local churchyards. In a strange way, by containing the remains of our all too temporary shells, the yards themselves achieve a kind of permanence. Things go there and stay there. No one digs up a cemetery to build a supermarket. Its space remains apart, freed even more of the constraints of time than the towns which they occupy. And here, in the aftermath of the greatest interruptions we can ever face, there is order. A grave is just one more thing that falls to the human need to organize. To make sense of it all. We lay out parcels with a certain arbitrary logic. Grandpa is in section 3-A, while the mayor and his family are in 4-D, and so forth. Churches in such towns taper off into the sky with stiff steeples, and brick and marble perpetuate the illusion that everything in the area, in some way, lasts. In terms of technique for these oddly reassuring patches of quiet, I often will play around with selective focus, since that dreamy half-state seems to align with my interior dialogue. Our pasts are as strange in their own way as our presents, and the standard rules for picture-making are vaporous, like ghosts.

Small towns are often liberally dotted with antique stores, as if objects themselves have need of a graveyard, a place to be collected beyond anyone’s needs or desires. The way we say farewell to things is often impossible to measure visually, but we carry cameras along wherever we go, because, well, you never know. When life’s various elements slip away there is often nothing to mark their passage. And yet sometimes there is just a little. And sometimes we can see it. And steal it. And hoard it.

This entry was posted on December 25, 2019 by Michael Perkins. It was filed under Americana, Focus, Landscapes and was tagged with Neighborhoods, Selective focus.