TIME, BEING A HUMAN CONSTRUCT (AND ESSENTIALLY AN ILLUSION) is one of those handy mind tricks we use to convince ourselves that we’re in charge. That we know how to plan, that we can bend events to our will, plot them out on a strategic map. Catch them in our camera boxes. It’s pure nonsense of course, just like stipulating that we all believe that green pieces of paper with dead presidents on them are of value. But as long as we’re all in on the joke, then…what?

Photographers are all about time, of course. Stealing it, freezing it, even trying to render it irrelevant. With a camera in hand, we dare to declare that time is what we say it is. Or isn’t. And on this day, billions of images will have been shot by breakfast in an effort to mark the act of crossing the meridian, the passing of one year into another (or, in this case, one decade into another). We feel some kind of biological urge to record what it was like/will be like. Snap. Here we are at the stroke of midnight, when one thing became another. Can you tell the difference? Can you show the difference in a frame? Time’s status as the Great Hoax doesn’t diminish its power. And so we click, and play. 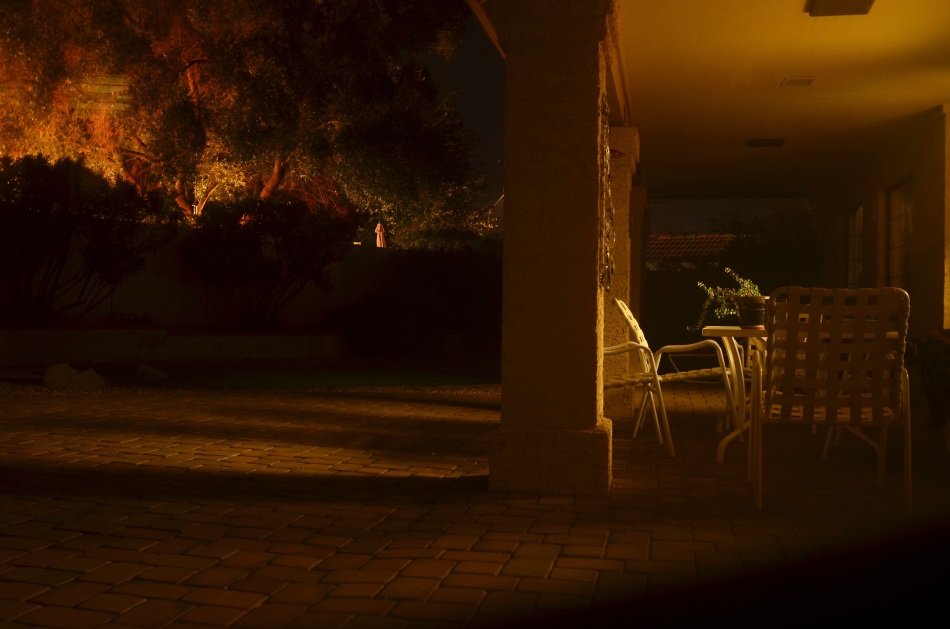 One image, two years. A time exposure begun in the dying seconds of 2019 and ending in the first moments of 2020.

What you see here is the attempt to imprison two years within a single image. I was struck, New Year’s Eve, by the contrast between my party-prone neighbors (they of the brightly lit trees to the left) and my own party-resistant nature (the quiet patio to the right), so much so that I thought the comparison of the two worlds was worth a picture. I set up the camera from my bedroom window and ran a few tests as the last hours of 2019 drained away, then tripped my remote timer in the final seconds of that dying year, so that the 43-second exposure would originate in one year and end in the next. Nothing much would change over the taking of the image, but I would know that I had crammed two years into one frame. Like time itself, a trick, an illusion. Turns out, that one year looks quite like another, with less to distinguish them than there is to distinguish my neighbor’s busy yard from my still one. There wasn’t so much as a fleeting firecracker light trail to betray the secret that I had taken a picture of time travel. Just the strange fable in my head. Just as it’s always been.

And here, again, is to the sweet and mad miracle of imprisoning magic in a box.

This entry was posted on January 1, 2020 by Michael Perkins. It was filed under Available Light, Commentary, Conception, Time Exposures and was tagged with Long exposures, night photography.