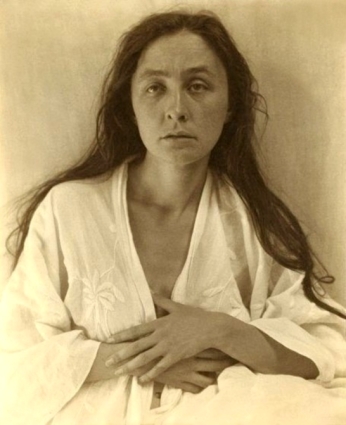 ALTHOUGH BEING ROMANTICALLY SMITTEN IS NOT A PREREQUISITE for being a great photographic portraitist, I firmly believe that the very best of them are, indeed, lovers…..or at least in love with a mysterious something that informs their work. From treasuring humanity so much that they breathe empathy into their candid street work, or loving an individual in a way that can only be satisfied by turning that someone into an ideal bit of moldable clay, portraitists are a bit possessed, fervently dedicated to showing something only their affection can let them see. It seems perfectly normal now for cameras to fall head over heels over faces. So inevitable, so logical. And yet the camera and the face had to have their own early days of courtship.

One of the earliest and most fascinating muses in photographic history was herself an artist, a soul so amazingly unchained and boundless that the natural, if perverse, reaction to it was to try to imprison it inside a box. The face of the painter Georgia O’Keefe (1887-1986) was not classically beautiful, but upon meeting her in 1916 at an exhibition, the pioneering photographer Alfred Stieglitz (1864-1946), a man whose enthusiasm helped to launch dozens of art careers beyond his own, was knocked cold. After years as the promoter of the Pictorialist movement and editor of the revolutionary art publication Camera Work, Stieglitz had, in his own estimation, become disconnected from his own photographic instincts. Stuck, if you will. O’Keefe, twenty-three years his junior, and as close to the embodiment of the phrase “free spirit” as you can imagine, unstuck him. Between 1917 and 1937, often as a sidebar to their famously torrid relationship, Alfred made over one hundred portraits of her, posing her in every setting, mood, and level of intimacy. Many of the images were nudes or partial nudes, but all of them were Stieglitz’ attempt to hone his own style to its purist form, to see O’Keefe as the ultimate object and subject. Writing to a friend, he described the opportunity and the challenge Georgia had brought to his work:

I am at last photographing again. . . . It is straight. No tricks of any kind.—No humbug.—No sentimentalism.—Not old nor new.—It is so sharp that you can see the pores in a face—& yet it is abstract. . . . It is a series of about 100 pictures of one person—heads & ears—toes—hands—torsos—It is the doing of something I had in mind for very many years.

Stieglitz also promoted O’Keefe’s own art in shows at his legendary 291 gallery and in a mixed show of photographers and painters entitled Seven Americans. Some of his most intimate portraits of O’Keefe were exhibited at the time as well, often with no attribution as to the name of the subject. Over the years, Alfred and Georgia’s relationship was as uneven as it was ardent, with Stieglitz having an affair after they were married, only to later see O’Keefe have a dalliance with the very same person several years later. Eventually, the combined tensions of their competing careers, issues of fidelity, and their gravitation to very different geographic art destinations (O’Keefe’s New Mexican desert versus Alfred’s beloved Manhattan) spelled the end for the marriage. Eventually, in history’s typical pattern, it is the art, rather than the artist, that survives.

And what Stieglitz had shown, early on in the 20th century, was what photographs created by a person possessed might look like, what portraits that were ignited by the heart might aspire to. I relate to this idea strongly in the case of my own work, which has been informed and often expanded by having my wife for a muse. In learning all the facets of her face, I in turn learn more about the secrets behind all other faces. I understand the spark that snapped when Alfred met Georgia, and I look for those fabulous fireworks every time I myself snap a shutter.

This entry was posted on March 11, 2020 by Michael Perkins. It was filed under Americana, History, Portraits and was tagged with O'Keefe, Stieglitz.