ANYONE WHO’S RIFFED THROUGH EVEN A MODEST SAMPLING of my photography will soon deduce that I am a sucker for storefronts. If eyes are the window to the soul, the street-facing faces of businesses great and small are my favorite kind of mystery game. Who dwells within? What’s for sale? Why that name? Why this sign? And of course my insatiable curiosity about the lives of the people who bravely flip over the “open” sign every morning. Long before the customer steps inside to check out a merchant’s wares, he is “asked for the order”, so to speak, by the visual language of the storefront.

I once knew a gent whose urban shop had an enormous double showcase windows, a space far too big for the mounting of anything large or expensive. As the windows, which flanked his front entrance, both had shalow ledge shelves, he filled them with about a half dozen black rubber cat-toy rats. Nothing else. No signs, no specials, no mannequins. Just….rats. Guy was an exterminator, and he had been in his particular neighborhood for so long that he no longer needed to blow money on fancy advertisements or weekly specials. Maybe his name was on the building, but I’m not even sure of that. Got rats? I get rid of rats. End of story. 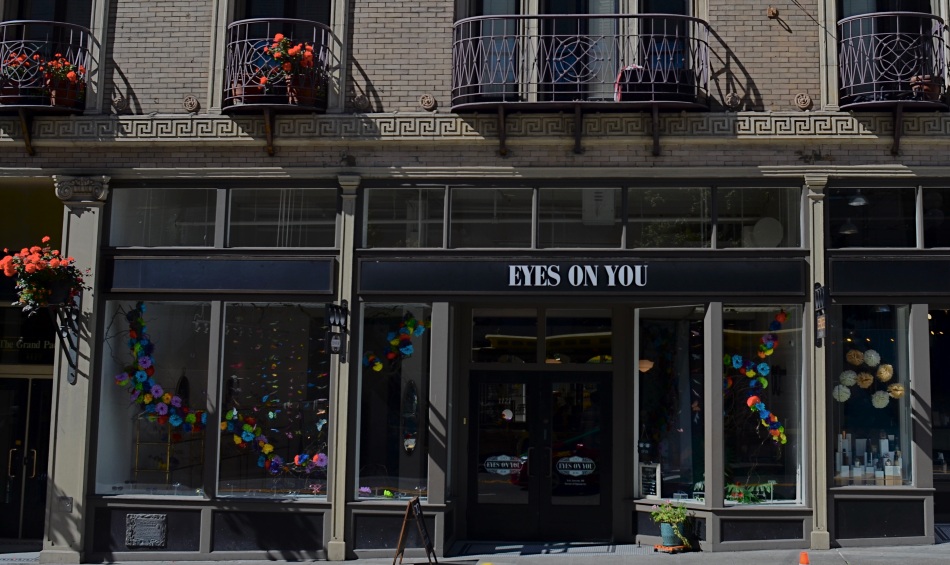 Okay, kids, let’s head over to ‘Eyes On You” to pick up some….glasses, maybe?

And there you have my quest in a nutshell. I love storefronts which boldly state that ground beef is going for $1.40 a pound or that “we repair any shoe”, but my absolute favorites are always the conundrums, the “exactly what is this place”-type businesses, where even a creatively decorated scheme is zero clue as to what is transpiring within….sort of like the shop seen here. And, yes, there are some tiny clues that Eyes On You is a place that sells glasses, as there are, indeed, a few of them just visible in a small niche in the right-hand windows. But what is all that other stuff? And what does it have to do with selling, well, anything? It doesn’t matter; half the fun, as the cruise lines used to say, is getting there, and decoding the marketing mysteries of small businesses is fun in the way that a brisk game of Twenty Questions can be. Photographs, as we often remind ourselves, both reveal and conceal….sometimes at the same time. Loving where and when that happens is the spice of the game.

This entry was posted on August 12, 2020 by Michael Perkins. It was filed under Americana, Signage, Street Photography and was tagged with Advertising, marketing.