WE ARE ALL BURT LANCASTER NOW

I REMEMBER BEING FASCINATED as a child by the 1963 film The Birdman Of Alcatraz, based loosely on the life of murderer Robert Stroud, whose accumulated crimes drew him a life sentence, much of it spent in solitary confinement. The movie, starring Burt Lancaster, centered on Stroud’s almost accidental introduction to birds, an improvised pastime which blossomed into an extensive and self-taught study of ornithology. The story’s biggest impact on me was the idea that someone could center on the smallest scintilla of hope, something others around you might ignore or simply not see at all, and that such small things might lead beyond mere survival to a kind of separate peace, even wisdom. In retrospect, I probably should have chosen a better model than that of a total psychopath. Still, the idea of being able to successfully navigate isolation was one that occasionally fascinated me over a lifetime. It’s also come to mind a great deal over the past year.

To paraphrase a cliched expression, we are all Burt Lancaster now; we have all learned to place greater focus on smaller worlds, and it is no accident that one of the biggest growth industries during our Global Great Hibernation has been the hobby of birdwatching. It’s cheap, it’s relatively easy to break into, and it’s as close as your window. More importantly, it’s a reassurance that life, or some semblance of it, has gone on, even if all we can do is watch as it wafts by. Like Stroud, we are all improvising to reduce the ache of greatly reduced circumstances. And like prisoners everywhere, confined behind either tangible or figurative bars, we are able, maybe for the first time, to see, in depth, something that was all but invisible to our previous system of seeing. 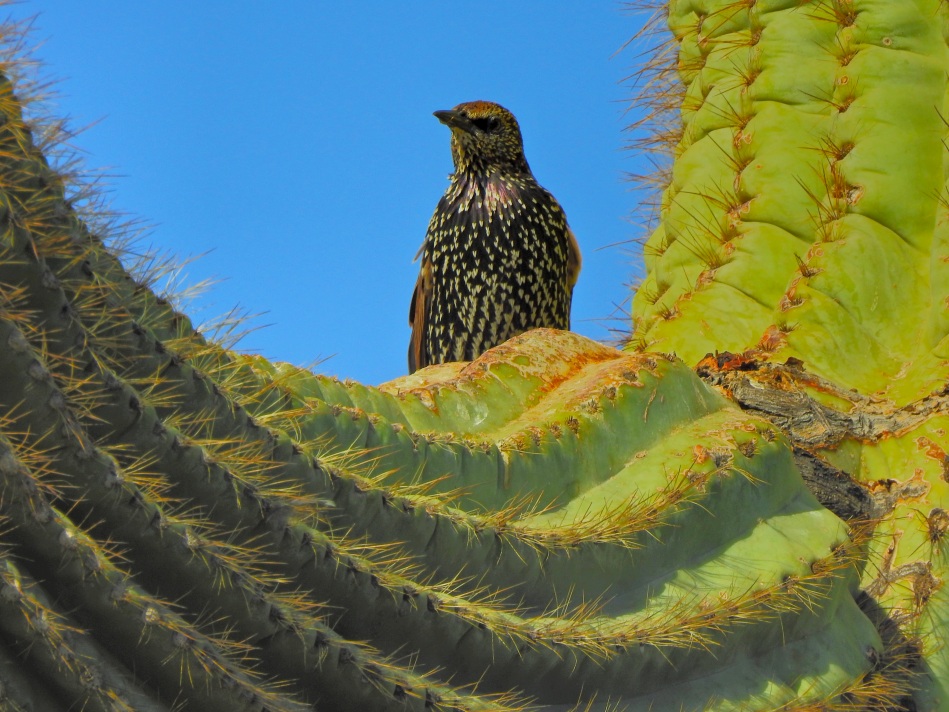 Nobody puts Baby in the corner, but you can occasionally put Starling in the circle.

For photographers, including this one, birds can be a metaphor for many things we already value about our art. Color, motion, texture, context, even a kind of portraiture…all are addressed in trying to assign traits or personalities to flying creatures. Working from the long, empty days, we slow down and deepen our observational powers. We view things in finer depths and degrees, in inches rather than miles now. I will freely admit that my own photographic coverage of birds had been, during The Before Times, confined to the easiest, most obvious captures; flocks caught accidentally in a vast beach vista; raptors in zoo cages; the occasional comic shot of a gull stealing a hot dog, etc. The quarantine has altered all that, stretching time like taffy, elongating our implementation of any undertaking from hours to days. But this is not an effort to overprescribe a general therapy for everyone; your “birds” may be furniture, the veins of a leaf, still lifes of your accumulated buffalo nickels. This is why we have congregations of varying denominations. While I am worshipping at the first temple of the ruby-throated sparrow, you may bow your head at the Community Church of the Holy Art Deco Ashtray or some such. The idea is that photography always benefits from patience and deliberation. Snap shots are marvelous manifestations of our impulses, but they are not the products of quiet contemplation.

My point is that there is room in your photography for both the spontaneous and the deliberative. In my case, tiny tweeters have become a kind of surrogate for human subjects, as I find myself searching their faces for traces of motive, emotion, even joy. Unlike the Birdman of Alcatraz, most of us will eventually be sprung, released back into the larger work yard, hopefully having learned a little more about playing well with others. And the pictures we made behind walls will be, in lasting ways, capable of taking grander flight.

This entry was posted on February 17, 2021 by Michael Perkins. It was filed under Commentary, Hobbies, Nature and was tagged with bird photography, Nature Photography.