OVER THE YEARS, I HAVE FILLED PAGES OF THIS LITTLE HOMETOWN NEWSPAPER with confessional accounts of my weaknesses in many areas of photography, with special emphasis on my underdeveloped skill with landscapes. To say that I need improvement in this area is, on the Captain Obvious scale, somewhat akin to breaking the hot bulletin that Batman has anger issues. And yet we soldier on.

It’s hard to look out upon a vast mountain vista or a yawning canyon and think in terms of simplicity. At least in my own case. I initially came to the visual arts as an illustrator, influenced by artists that I can only call “completists” in that they drew intricate compilations of every leaf, stone and speck within a scene, a technique that my infant brain referred to as “realistic”. It follows, then, that as I segued into photography, my instinct was to go for that illustrative look, with tons of detail, and a broad panoramic sweep. It drew me to grand subjects and wide, wide lenses. 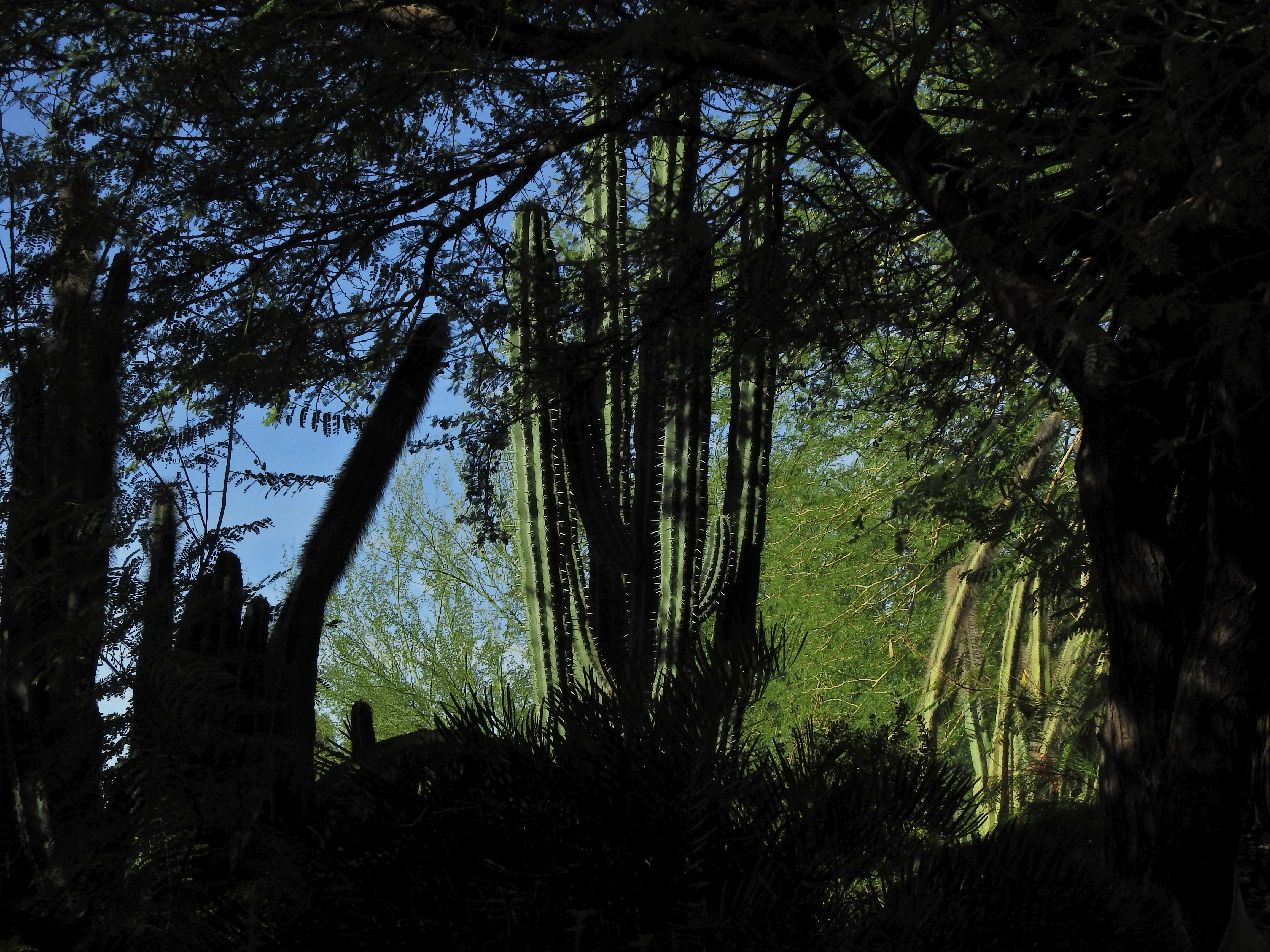 Occasionally, this has served me well, but more often it gave me a severe case of Too Much Picture, frames that were so drowned in detail and visual information that I was challenged to tell succinct, clear stories in landscape form. There was always plenty to look at, but I wasn’t developing a real instinct for what a viewer should look at first, or should regard as the central narrative focus of a picture. My sense of composition still fell too often into the “get everything in there” side of the fence. I produced well-focused pictures of scenes that were always okay, but seldom compelling.

These days, I fight to make the simplest framings that I can. I struggle to present one main idea and make everything else in the image subservient to that idea, or at least to get out of its way. The frame seen here is done quite differently than I might have made it as a younger man. The forked cactus at the center has been designated as the main messenger of the picture, with everything else reduced in definition or importance. In the past, I might have tried to expose the picture uniformly, with every spine, frond and branch in the same brightness or color intensity. Now I am far more likely, in this case, to expose just for the central open space and leave the surrounding halo frame in shadow….the idea being to let some things have louder voices in a picture than other things. I have done the same thing with selective focus, using blur or softer resolution to force attention onto the primary feature in the picture.

I still have a lot of work to do, but at least I have moved from my original habit of giving all elements in a landscape equal status to trying to, if you like, direct eye traffic to greater effect. It’s a struggle for balance between the picture’s M&Ms, or the major and minor messengers for that particular photograph. It’s not an exact science. Hell, it’s not even an exact art. But it’s the only way I can shoot landscapes if I want to escape the dreaded gravitational pull of Planet Postcard.

This entry was posted on November 3, 2021 by Michael Perkins. It was filed under Uncategorized and was tagged with Composition, focus, landscapes.