ANYTHING PAST ZERO IS A WIN

HERE, AT BREAKNECK SPEED AND WITHOUT SHAME, COMES A SUPREME PHOTOGRAPHY CLICHE.

“You always miss 100% of the shots that you don’t take.” (Scattered, half-sincere applause. Several moans.)

Okay, maybe they were talking about basketball. Or people taking pictures of basketball. Beyond the tired corniness of the sentence, however, lingers an unassailable fact: if you don’t try to get the picture, you won’t get the picture. Every time you pre-censor yourself by saying, “ah, the light’s not right” or “I didn’t bring the right lens” or “I don’t push shutter buttons when the moon is in Virgo”, you’ve definitely shielded yourself from failure. But you’ve also guaranteed that you’ll come home empty-handed. In effect, in the interest of getting something wrong, you’ve ensured that you may nail something marvelous, regardless of your misgivings. 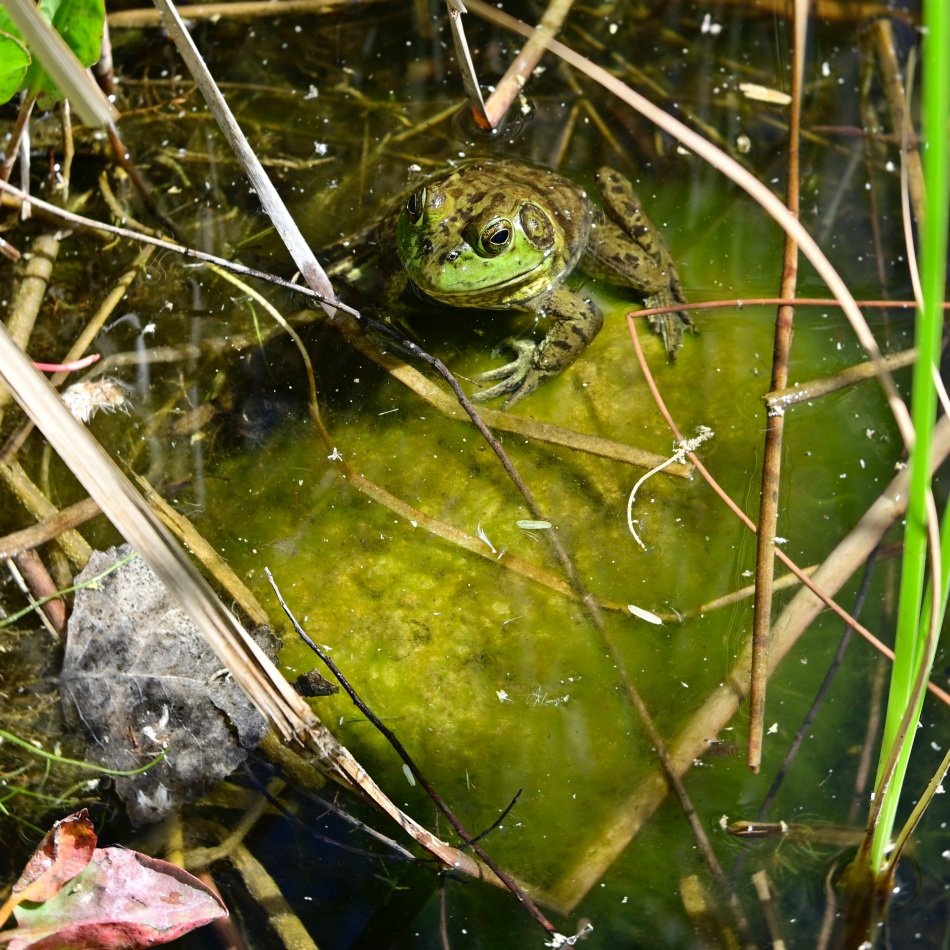 All of which seems antithetical to making any photograph, let along a good one. True, your chances of success in less-than-ideal conditions are diminished, but you’ve probably already had the experience of harvesting a miracle in spite of…..in spite of the garbage light, in spite of the hurried conditions, in spite of the fact that you needed to hurry-erase several frames off your memory card to even try the shot…in spite of….

I was reminded of all this yesterday when I almost didn’t try for this fat little bullfrog. He was about twenty-five feet away, and I had come out with a 56mm prime lens with no zoom. There was also the risk of spooking him and getting a great image, of, well, pond water. But I was on a full-frame sensor body, shooting at the highest resolution and the biggest file possible, so I thought, why not? I can crop the thing later and there will probably still be enough resolution to save the day. The entire decision took about fifteen seconds, and, as you can see, even though the pic is not going to get me on National Geographic’s Christmas card list, it was worth the trip. The entire point here is to get you out of the habit of talking yourself out of trying a shot before the fact. After all, there’s plenty of time to hate on a picture after you’ve taken it (which is more fun for others, as well) and, in terms of a winning percentage, anything past zero is a win.

This entry was posted on May 4, 2022 by Michael Perkins. It was filed under Uncategorized and was tagged with Composition, Lenses.