READY FOR HIS CLOSE-UP

AS THE FIRST MEMBER OF HIS IMMIGRANT FAMILY TO BE BORN IN THE UNITED STATES, Robert Cornelius (1808-1893) grew up in a world in which the word photography was not yet a part of the general vocabulary. The infant art of preserving static images for posterity was, at Cornelius’ birth, still the exclusive domain of tinkerers and hobbyists, a universe away from the global obsession it would become within a few short decades. He himself did not even take a photograph on his own until he was nearly thirty years of age.

However, once he did, he became legend.

Or, rather, his face did.

Trained in chemistry, young Robert began his career apprenticed to his silversmith father, and so was well acquainted with various plating processes by 1831, when the photographer Joseph Saxton asked him to prepare the coating on a daguerreotype plate. Daguerreotypes were the medium that preceded film as the dominant technique for making pictures in the early 19th century. Silvered plates were polished to a mirror-like sheen, then treated with fumes that made the plate light-sensitive: after exposure, additional mercury vapor and a bath of various chemicals were applied to arrest the light-recording process, and the plate was dried. The plate Cornelius delivered to Saxton allowed him to record the earliest known photograph made in America up to that time, an image of a Philadelphia high school building. 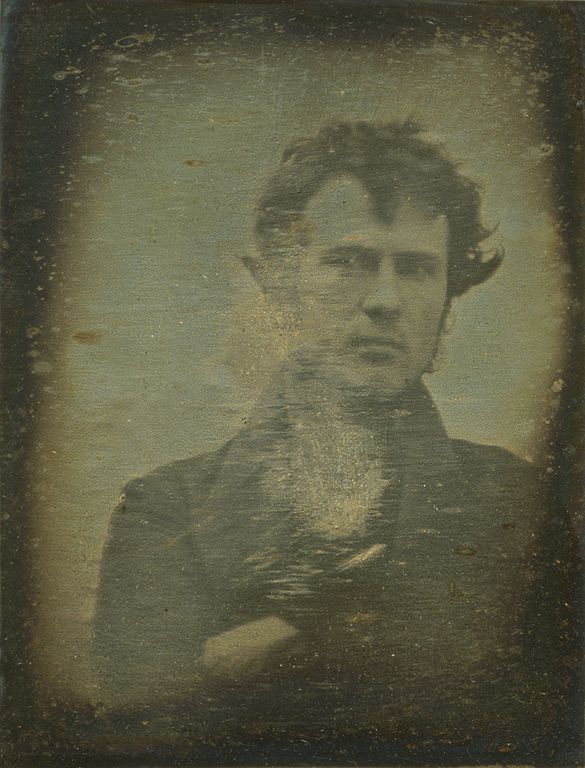 Robert caught the picture-making bug himself shortly thereafter, joining with a local chemist to perfect the daguerreotype medium, and, by 1839, posed in front of his own camera for what is commonly thought to be the first intentional portrait of a human (as well as the first self-portrait) taken outside of Europe. The slow exposure rates of daguerreotypes required Cornelius to sit motionless for up to fifteen minutes.

Cornelius briefly operated one of the first full-time portrait studios (years ahead of the New York salon of Matthew Brady) but made his fortune largely with his other inventions, including an improved system that helped replace the need for whale oil in lamps. It’s said that he actually thought little of his place in photographic history until his selfie was featured in an exhibition marking Philadelphia’s centennial in 1876 and he was celebrated by a new generation eager to chronicle an accurate timeline of the new art.

Robert Cornelius happened upon photography almost by accident, and yet, because he also modified and improved exposure times for images (along with other refinements), is a vital link in its evolution, as well as the godfather of all those billions of moody, sexy snaps we now employ so effortlessly (and endlessly) as we present ourselves to the greater world.

This entry was posted on July 20, 2022 by Michael Perkins. It was filed under Uncategorized .