IN MY SHORT PANTS DAYS, I USED TO DRAW WEIRD STARES FROM GROWNUPS when I would point at objects and claim that I saw faces within them. Highway light poles. The fronts of radios. The headlights and grilles of cars. Often the faces were merely strange, but to my Child-Of-The-Cold-War mind, they were often malevolent. My youth was also, in addition to the being the golden age of nuclear jitters, also a high-water mark for a pop culture landscape littered with aliens and creatures of questionable intent.

All you armchair analysts may now pause to trot out your pet treatises on anxiety.

But one man’s crazed paranoia is another man’s photographic vision, and, years later, I find that the ability to see things that others cannot is less an affliction than a gift (within reason). Difference between Now and Then is that, now, I no longer care if anyone else thinks I spend too much time hanging out in the anxiety closet. 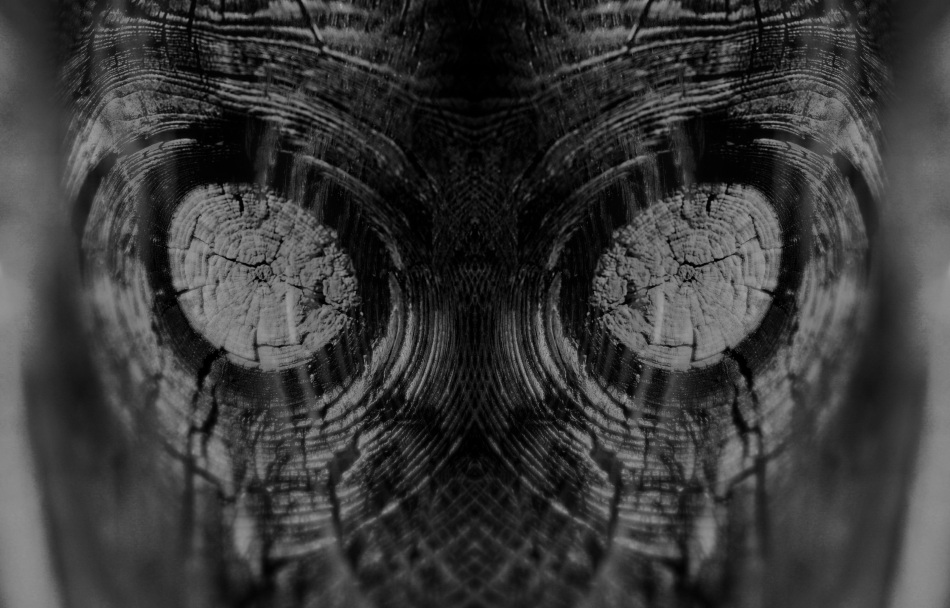 A: When it’s one half of a “galaxy being”, naturally.

The montage (visage? face? nightmare? abstraction?), seen directly above, wasn’t readily visible in the making of the original image from which it sprang, starting its life as merely a soft-focus shot of a tree’s knothole surrounded by outward radiating “wrinkles”. In fact, upon first seeing it in playback (see top image), I had no intention for the shot at all, stumbling back over it many months later, at which time it seemed to suggest the eye of an elder elephant. I started playing with the idea of making it seem like a super close-up of a wise old pachyderm, when I started asking myself what kind of symmetrical “face” might be fashioned out of doubling the knothole. There was dead space to the left of the original, so I just duplicated the shot, reversed one copy, converted it to mono, and blended the two pieces in Photomatix in the “Exposure Fusion” mode. The elephant had now become….the Elephant Man?

Actually, the more I live with this…thing, the more I realize that he very likely was coughed up from my unconscious memory of the title character in The Galaxy Being, the pilot episode of the classic Outer Limits series. He, too was all about the eyes (and not much else, since he was pure electromagnetic energy, duh). But sixty years on, an aging kid with an overactive imagination knows that monsters, and mashups, are where you find them. And, these days, with far scarier monsters to contend with in the real world, the process is less freaky and more fun.

This entry was posted on August 17, 2022 by Michael Perkins. It was filed under Uncategorized .