THE NEW ERA OF TESTIMONY

WHETHER THERE IS CONSENSUS ABOUT THE PRESENT OR FUTURE STATE OF THE NATURAL WORLD, we are certainly in the midst of the most muscular conversation about its fate than many of us have ever known. That means that we are changing and challenging our relationship to the globe almost daily…and, along with that relationship, the way that we see, and visually report upon it. That generates a new emphasis on bearing witness to what the planet is/can be/ might be.

I call it the new era of testimony.

The birth of photography coincided with the first great surge of cross-continental expansion in America, as well as an explosion in invention and mechanization. The new system for making a physical record of the world was immediately placed into service to help quantify the scope of the nation…to measure its mountains, track its rivers, count its standing armies. Photographers like Timothy Sullivan and William Henry Jackson lugged their cameras east-to-west alongside geological surveys, railroad agents, and the emerging naturalist movement. While some shooters chose to capture the creation of new trestle bridges, others helped poets illustrate their Walden-esque reveries. In all cases, photography was tasked with the job of showing the natural world and our interaction with it. Most importantly, the images that survive those times are a visual seismograph on both the grand and grotesque choices we made. They are testimony.

And now is a time of radical re-evaluation of what that interaction should look like. That means that there is a visual story to tell, one of the most compelling and vital that photography has ever told. Regardless of your personal stances or stats, man’s place on the planet will be in a state of fundamental shift over the coming decades. And the images that this change generates will define both photography as an art and ourselves as stewards of an increasingly fragile ecology.

Ansel Adams, for all his gorgeously orchestrated vistas, was, I believe, mistaken in almost deliberately subtracting people from his grand scenes, as if they were irrelevant smudges on nature’s work. It doesn’t have to be that way. We need not make war on our native world. But whatever we do, we need to use the camera to mark the roads down which we have chosen to walk. Whether chronicling wise or foolish decisions, the photograph must be used to testify, to either glorify or condemn our choices going forward.

BE THE CAMERA. NOW BE BETTER THAN THAT.

A man, a plan, a woody: Ansel Adams in his element. Yosemite’s Half-Dome is at the right.

MERELY INVOKING THE NAME OF ANSEL ADAMS is enough to summon forth various hosannas and hallelujahs from anyone from amateur shutterbug to world-renowned photog. He is the saint of saints, the yardstick of yardsticks. He is the photographer was all want to be when (and if) we grow up. His technical prowess is held as the standard for diligence, patience, vision. And yet, even at the moment we revere Adams for his painstaking development of the zone system and his mind-blowing detail, we are still short-changing his greatest achievement.

And it is an achievement that many of us can actually aspire to.

What Ansel Adams did, over a lifetime, was work his equipment way beyond its limits, milking about 2000% out of every lens, camera and film roll, showing us that, to make photographs, we have to constantly reach beyond what we think is possible. Given the slow speed of much of the film stocks and lenses of his era, he, out of the wellspring of his own ingenuity, had to make up the deficit. He had to be smarter, better than his gear. No one piece of equipment could give him everything, so he learned over a lifetime how to anticipate every need. Look at one of many lists he made of things that he might need on a major shoot:

However, the magic of Ansel Adams’ work is not in how much equipment he packed. It’s that he knew precisely what tool he needed for every single eventuality. He likewise knew how to tweak gear to its limits and beyond. Most importantly, his exacting command of the elemental science behind photography, which most of us now use with little or no thought, meant that he took complete responsibility for everything he created, from pre-visualization to final print.

And that is what we can actually emulate from the great man, that total approach, that complete immersion. If we use all of ourselves in every picture that we make, we can always be better than our cameras. And, for the sake of our art, we need to be.

This is where it all began; the famous outcropping of stone atop Yosemite’s Glacier Point, where Sierra Club founder John Muir and President Theodore Roosevelt stood in 1903 to symbolize the beginning of the United States National Park system. 1/125 sec., f/14, ISO 100, 32mm.

WE CAN ONLY GUESS, AS HE GAZED OUT UPON CANAAN, the long-promised homeland of the wander-weary Israelites, what Moses felt, especially given that he himself would be forbidden to set foot upon that sacred soil. Perhaps, in our recent history, something of a parallel can be drawn to the vista shown above, the aerie from which John Muir, the lanky, ascetic Scotsman who became the first champion of the Yosemite, peered into the vast wilderness he was sworn to protect. This is the view from atop Glacier Point, directly opposite Half-Dome and, in the farther distance, the majesty of Yosemite Falls. It is also one of the only places in the United States where you can literally stand on the spot where history took a new turn.

Like Moses, Muir was a both a prophet and a protector, entranced by the stunning beauty of his adopted country and horrified at its vulnerability before the juggernaut of progress. Unlike Moses, he actually gained entry to his personal promised land, hiking its immense acreage, personally discovering many of its most amazing features and acting as correspondent to his fellow countrymen to apprise them of the great treasure lying unknown inside their borders.

As the founder of the Sierra Club and the most profound poet laureate of the preservation movement (he favored that word over the later “conservation”), Muir’s first choice would probably have been to surround all of Yosemite with at least a mental fence, a barrier of conscience to prevent its plunder by profiteers. His second choice became fateful for us all…..to enlist the federal government as a guardian for his Eden, and to unleash the energy of that nation’s most intrepid crusader for the environment.

John Muir was a veteran of nearly 35 years of preservationist skirmishes by the time he met President Theodore Roosevelt in 1903. Muir, desperate for a way to protect Yosemite beyond the puny efforts of local and state governments, met TR in Oakland, California, and the pair traveled by train to Redmond before taking a stagecoach the rest of the way into Yosemite Valley. Muir used the travel time to implore the president to place Yellowstone under national protection, and Roosevelt, agreeing, asked his host to show him “the real Yosemite”. After heading out into the back country essentially alone and camping under the stars atop Glacier Point, the two awoke to new-fallen snow and a new alliance. 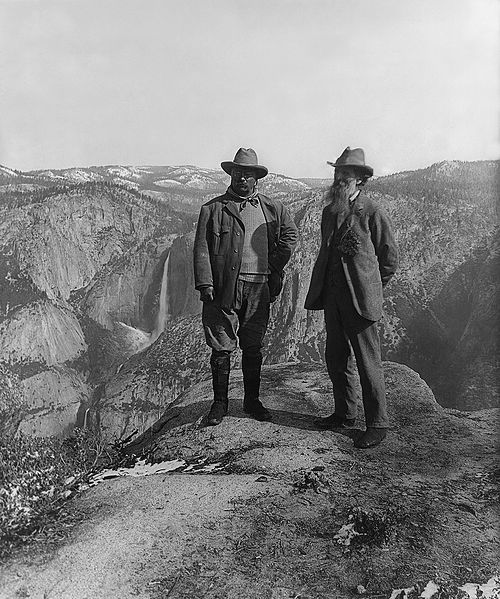 “This is Bully!” Roosevelt and Muir atop Glacier Point, 1903.

That alliance was captured in the shot at left, which shows nearly the same view of the Yosemite Valley as my image at the head of this article. Three years later, in 1906, Muir and the Sierra Club successfully added the valley and the Mariposa Grove (a massive forest of giant sequoias) to the overall Yosemite National Park acreage, and finally saw the entire area placed under federal protection. The United States National Park concept, unique in the entire world of the early 20th century, had been born, the American Moses leading the way to a greener, more perfect union.