IT’S NOT HYPERBOLE TO SAY THAT THE GREAT HIBERNATION, our global banishment from our regular lives, feels a bit like living through a war. As in a traditional conflict, there are separations, sudden deaths, deprivations, and a feeling of “where have I been?” that accompanies our every venture outside our safe zones. So many of us have simply backed out of the flow of time that, as in times of war, we are startled by what has been altered or even vanished since the last time we cautiously emerged to explore the sites of our old existence.  And that shock, in turn, informs all of our art, including, of course, photography.

The first thing that we notice is that so many things that were solid and substantial before we ducked under cover have been either greatly altered or completely vaporized. And the sensation is not limited to things that were already crumbling, but also includes things that were just becoming part of our world in the moments immediately before the lockdown. Places that just cut their ribbons of newness a heartbeat ago, but which already find themselves neutralized, obsolete. Of course, society is always closing chapters and tearing down buildings, in a cycle of goodbyes that seem almost normal, pandemic or no. But the toll created by our withdrawal from the daily parade also lists things that were just getting started, the space between their grand opening days and dark closing nights shrunk by circumstance . And our photographs of those things, taken either before or after these brief appearances, are poignant images of what might have been, a measure of the gap between our hopes and the ruthless randomness of this strange new world. 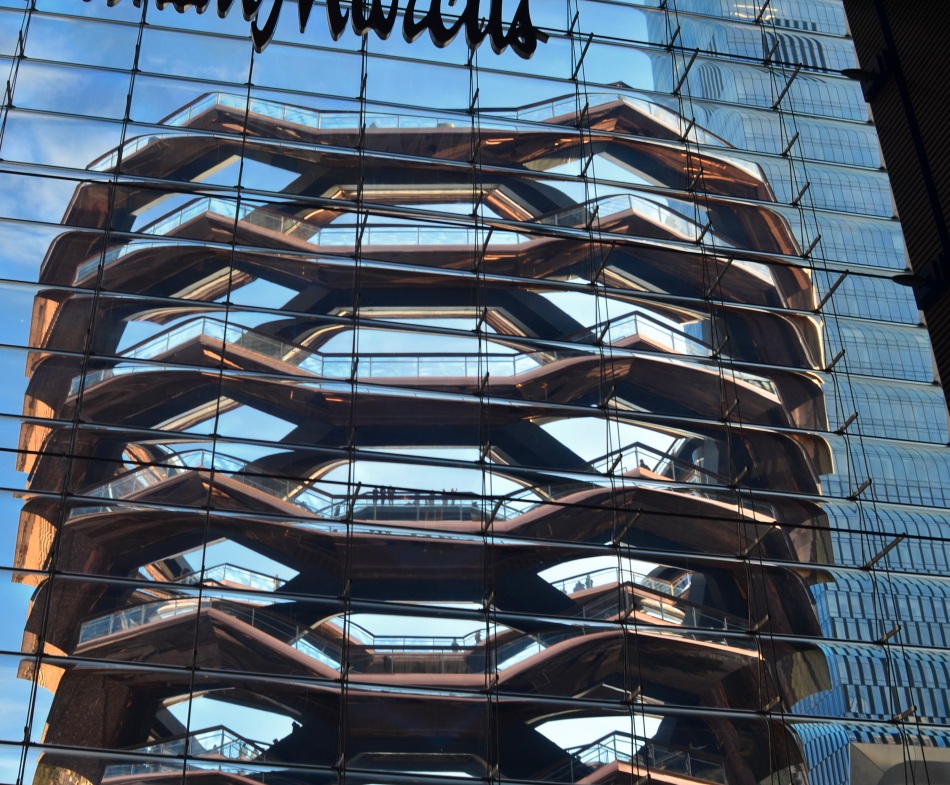 The now-vacant “Vessel” stands opposite Hudson Yards’ Public Square in the long-ago Manhattan of 2019.

As one example, consider this image of Vessel, a bold (and controversial) open-air attraction that acts as a kind of visual rendezvous at the head of the massive new Hudson Yards district in Manhattan. Part sculpture, part observation deck, part tourist trap, the structure sits opposite the main entry to the Yards’ Public Square mall. Built at a cost of 200 million dollars, it rose to sixteen floors, honeycombed 154 flights of stairs, and became an instant hit with visitors, who were admitted via free but timed tickets. Vessel’s very bigness rendered its actual value as art moot; like the Eiffel Tower (to which it was compared) or Niagara Falls, it just was, and, in so being, became part of what you do when you “do” New York. It opened to the public in March of 2019.

You can guess a lot of what followed. As NYC locked down, retail took a major hit and retail on the massively ostentatious scale seen at Hudson Yards took an even bigger one. Leases were renegotiated, then abandoned outright. The project (still unfinished) that was designed to reconfigure an entire economic sector of the Apple was down on one knee. And something weirdly symptomatic of the times occurred with Vessel; people started to jump off of it to their deaths. Last month (January 2021), the structure was closed “indefinitely”, its term as a pet chunk of Americana capped at just under two years’ time.

I was lucky enough to photograph Vessel in person, creating day and night images that now seem as bizarre as launch-party pix of the Hindenburg or snapshots from Titanic. Photographers often catch a flavor of a time by accident, and many of our personal archives are populated by things we never thought of as perishable or mortal at the moment we shot them. Vessel is just one very public barometer of Dreams Gone Wrong, visions that deserve to be preserved inside our magic light boxes, either as tributes to our dreams or tombstones to our folly.

LOOK, UP IN THE SKY!

IN ONE SENSE, THE GLOBAL LOCKDOWN OF 2020 has created the biggest simultaneously experienced event outside of a world war. The advertising slogans are right: we really are in this altogether. On the other hand (thinking purely like a photographer), the way we all go through this is often solitary, hidden from mass view. Many of our struggles are not waged in the public eye, which is where so many amazing images are born. Instead, we are living with a mass event without the mass reactions.

And so, yes, I miss crowds. Audiences. Throngs. Multitudes cheering, crying, yearning, celebrating. Because photographs of those instantaneous, shared emotions are, in themselves, deeply affecting, sometimes more so than whatever the crowd is actually reacting to. A static picture of a guy cranking a bat around to send a homer over the back fence is one thing, while the backdrop of amazed thousands seeing him do so takes the photo to a completely different level. Certainly, we all crave solitude, as a measure of what is most personally affecting or shaping us, and photographs borne of those feelings are undeniably poignant. But in this time of general-suffering-individually-contained, we are robbed of the pictures that actually show us all being in it together. Consider the opening to the old 1950’s Superman series. It’s not that a guy is flying right over your head: it’s that you’re in a crowded street full of people all having your minds blown simultaneously. Look! Up in the sky……

The aftermath of a rainstorm over the Hollywood Hill, seen here, would have been gorgeous all by itself. But what makes me love this picture most is the fact that everyone gathered here (actually visitors to Griffith Observatory, which points the opposite direction, and packs its own killer view, of downtown L.A.) has been struck by the same wonder at the same time. We are all, for a few moments, one person. For just a few seconds, nothing is as important as what we’re seeing and feeling, together.

There will be a time, again, when images will be made of us all emerging from this shadow, all blinking our collective eyes at the strange sensation of walking back into the sunlight. And yes, there will, in the anxious interim, be news footage of us cramming like crazed ants into beach bars or partying heedlessly in crowded streets. But that brief surge of manic novelty won’t be the real picture. The real picture will occur when honest cameras register the genuine joy of not just getting back out but getting back to each other, and pointing skyward to ask, “is that a bird? A plane…?”