IF THE EYES ARE THE WINDOW TO THE SOUL, then certain windows are an eye into contrasting worlds.

Photographers have devised a wide number of approaches when it comes to using windows as visual elements. Many choose to shoot through them with a minimum of glare, as if the glass were not there at all. Others use them as a kind of surreal jigsaw puzzle of reflected info-fragments. 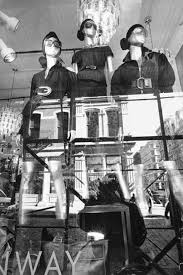 To show these two approaches through the eyes of two great photographers, examine first Eugene Atget’s shots of 19th-century Paris storefronts, which mostly concentrated on shopkeeper’s wares and how they were arranged in display windows. Straightforward, simple. Then contrast Lee Friedlander’s 21st-century layered blendings of forward view and backward reflection (seen at left), which suspends the eye between two worlds, leaving the importance of all that mixed data to the viewer’s interpretation.

Much of my own window work falls into the latter category, as I enjoy seeing what’s inside, what’s outside, and what’s over my shoulder, all in the same shot. What’s happening behind the glass can be a bit voyeuristic, almost forbidden, as if we are not fully entitled to enter the reality on the other side of the window. But it’s interesting as well to use the glass surface as a mirror that places the shop in a full neighborhood context, that reminds you that life is flowing past that window, that the area is a living thing.

Thus, in an urban setting, every window is potentially two-way glass. Now, just because this technique serves some people as a narrative or commentary doesn’t make it a commandment. You have to use the language that speaks for you and to your viewer. Whatever kind of engagement serves that relationship best dictates how you should be shooting. I just personally find layered windows a fun sandbox to play in, as it takes the static quality away from a still photo to some degree, as if the image were imbued with at least the illusion of motion.

Sometimes it’s good to conceal more than reveal, and vice versa. The only “must”, for this or any other technique in photography, is to be totally mindful as you’re creating.  Choose what you mean to do, and do it with your eyes fully open.

I’M LOOKING THROUGH YOU 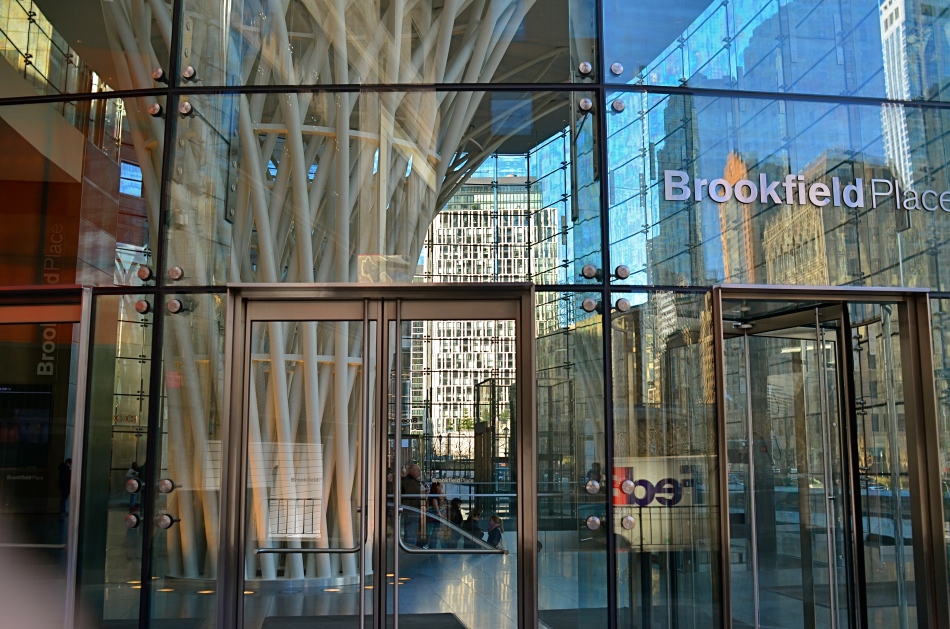 ANYONE WHO REGULARLY PHOTOGRAPHS GLASS SURFACES realizes that the process is a kind of shot-to-shot negotiation, depending on how you want the material to react and shape your subject. There is really no absolute “look” for glass, as it has the ability to both aid and block the view of anything it’s around, in front of, or near. Viewed in different conditions and angles, it can speed the impact of an image, or foil it outright.

I love shooting in urban environments, where the use of glass has shifted dramatically in recent decades. Buildings that were 90% brick or masonry just fifty years ago might be predominantly wrapped in glass today, demonstrably tilting the ratios of available light and also changing what I call the “see-through” factor…the amount of atmosphere outside a building can be observed from inside it. This presents opportunities galore of not only what can be shown but also how abstracted glass’ treatment of reflection can serve a composition.

Against the advice of many an online pundit, I keep circular polarizing filters permanently attached to the front of all my lenses so that I can modify reflections and enhance color richness at my whim. These same pundits claim that leaving the filter attached when it’s not “needed” will cost you up to two stops of light and degrade the overall image quality. I reject both these arguments based on my own experience. The filters only produce a true polarizing effect if they are either at the right viewing angle vis-a-vis the overhead sun, or if they are rotated to maximize the filtering effect. If they don’t meet either of these conditions, the filters produce no change whatever.

Even assuming that the filter might be costing you some light, if you’ve been shooting completely on manual for any amount of time, you can quickly compute any adjustments you’ll need without seriously cramping your style. Get yourself a nice fast lens capable of opening to f/1.8 or wider and you can even avoid jacking up your ISO and taking on more image noise. Buy prime lenses (only one focal length), like a 35mm, and you’ll also get better sharpness than a variable focal length lens like an 18-55mm, which are optically more complex and thus generally less crisp.

In the above image, which is a view through a glass vestibule in lower Manhattan, I wanted to incorporate the reflections of buildings behind me, see from side-to-side in the lobby to highlight selected internal features, and see details of the structures across the street from the front of the box, with all color values registering at just about the same degree of strength. A polarizer does this like nothing else. You just rotate the filter until the blend of tones works.

Some pictures are “about” the subject matter, while others are “about” what light does to that subject, according to the photographer’s vision. Polarizers are cheap and effective ways to tell your camera how much light to allow on a particular surface, giving you final say over what version of “reality” you prefer. And that’s where the fun begins.

COLOR, IN A PHOTOGRAPH, IS OFTEN THOUGHT OF IN OVER-SIMPLIFIED TERMS, as if there were one even tone to every part of everything we capture, what I call the “paint roller” school of thought. One of the reasons color was so long in development in the film era was because it had to become accurate at measuring the myriad inconsistencies in the hues of objects. Consider the wide range of pinks, reds, even blues in the contours of a single human face. There is no “flesh” color outside of a box of Crayolas, and color photography has evolved over time to deliver the real, if tricky, inch-to-inch changes in the tone of every kind of surface.

Skin or wood, plastic or metal, color changes frequently over the surface of an object, and good photographers learn how to get stunning effects through application of that principle. One subject which can deliver dramatic results with little effort is the urban building, primarily the metal urban building. Many of the metals used in construction are actually alloys, and so they already contain color elements of their constituent ingredients. 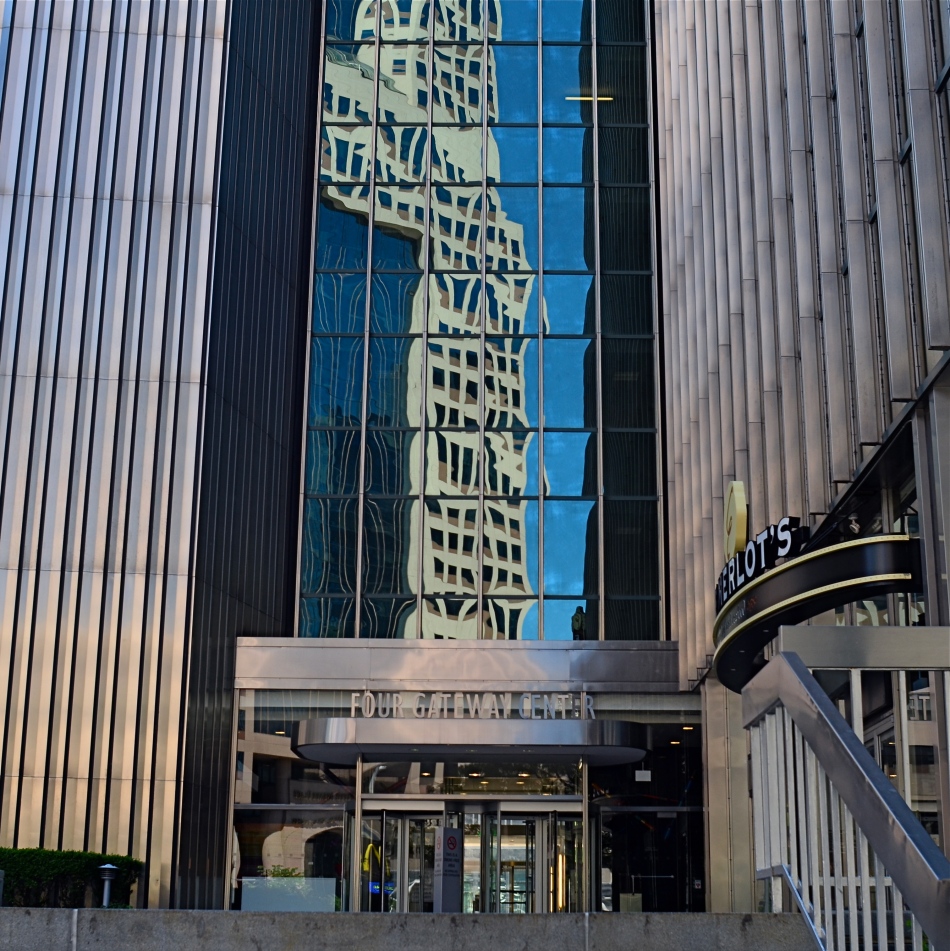 I try to shoot alloys in fairly indirect light, as this amps up the shimmer and gloss of their surfaces in a way straight-on lighting tends to bleach out or subdue. I also set my camera for whatever “vivid” color setting it allows, since more color information means more clear reproduction of the subtle changes in tone from, say, one end of a section of metal to the other. In post-production, I will often play with contrast and temperature to enhance whatever I want to present in the image’s overall color mood.

Metal can run the gamut from grey to blue to green to pure white, and learning how to place those shades where you want them can add dimension to your photos. 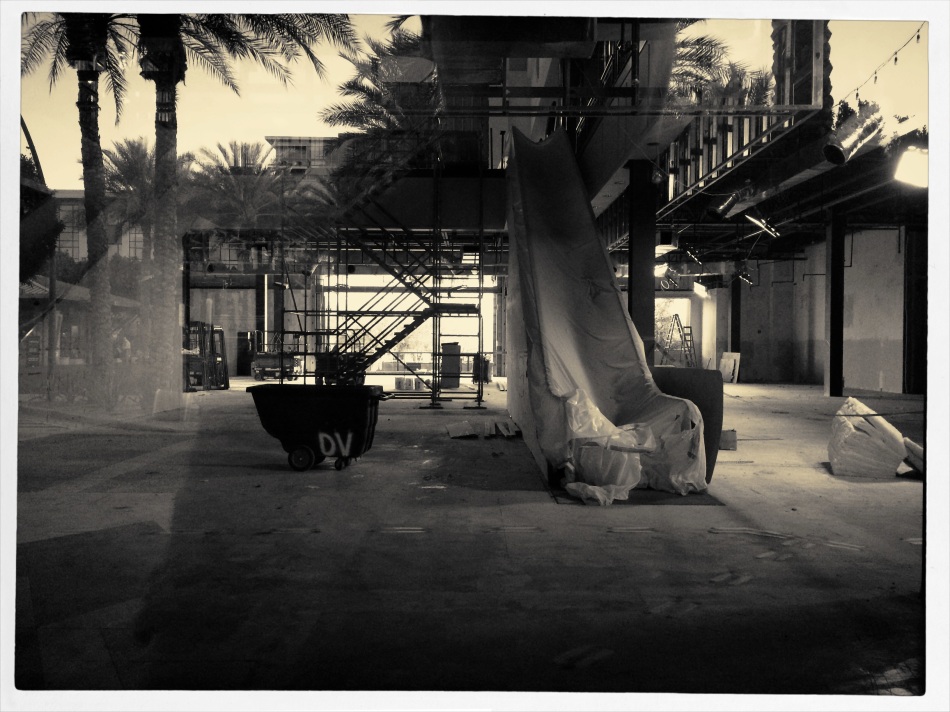 I HAVE A THEORY THAT “SERENDIPITY” is just “dumb luck” for pretentious people. Somehow it makes our random discoveries and unplanned miracles sound cooler if we attribute them to some grand lining-up of the planets, as if we apes really meant to discover fire. So, fine. Consider this an incident of serendipity, although it’s mainly a case of “I stepped in sugar instead of….” well, you get the idea.

Setting the scene: a suburban mall near me recently closed its enormous bookstore, applying a dark sheet of tint on the building’s huge windows so gawkers couldn’t spy on the joint’s sad makeover as a furniture store. Of course, if you want to make people curious about something, blacking out the windows is a pretty effective tactic, and there are always plenty of people smashing their faces up against the impermeable tint every day to see what a bookstore looks like when it has, you know, no books in it. I am usually first in line for this ritual.

Given the very wide-angle of such devices, however, I discovered, after the click, that the lens had also picked up a portion of the window next to the peephole, a portion still covered by tint and capable of reflecting the scene behind me….various buildings and landscaping of the rest of the mall. Even stranger, the “other” reality behind me melded, through the blurred outline of the peephole and variances of light, with the scene inside the store, as if they were all part of one dreamy landscape, a Hollywood set in transition. Giddy at what I had grabbed by accident, I shot a second frame to compose things a bit better, then converted it to monochrome with a filter that simulates a platinum print effect, an effort to eliminate mismatches in color and tone between the two worlds.

Sinatra once said that “the professional is the guy who can do it more than once”, so this image ranks me solidly among the amateurs. But so what. Whoops. Yay.

GLASS SURFACES REPRESENT A SERIES OF CHOICES FOR PHOTOGRAPHERS, an endless variety of effects based on the fact that they are both windows and mirrors, bouncing, amplifying or channeling light no less than any other subject in your frame. No two shooters approach the use (or avoidance) of glass as a compositional component in quite the same way. To some, it’s a barrier that they have to get past to present a clear view of their subject. To others, its fragments and shards of angle and light are part of the picture, adding their own commentary or irony.

I usually judge glass’ value in a photograph by two basic qualifiers: context and structure. First, context: suppose you are focused on something that lies just beyond a storefront window. What visual information is outside the scope of the viewer, say something over your shoulder or across the street, that might provide additional impact or context if reflected in the glass that is in direct view? It goes without saying that all reflections are not equal, so automatically factoring them into your photo may add dimension, or merely clutter things up.

The other qualifier is the structure of the glass itself. How does the glass break up, distort, or re-color light within an enclosure? In the above image, for example, I was fascinated by the complex patterns of glass in an auto showroom, especially in the way it reassigned hues once the sun began to set. I had a lot of golden light fighting for dominance with the darker colors of the lit surfaces within the building, making for a kind of cubist effect. No color was trustworthy or natural , and yet everything could be rendered “as is” and regarded by the eye as “real”.  The glass was part of the composition, in this instance, and at this precise moment. Midday or morning light would render a completely different effect, perhaps an unwelcome one.

Great artists from Eugene Atget to Robert Frank have created compelling images using glass as a kind character actor in their shots. It’s an easy way to deepen the impact of your shots. Let the shards and fragments act like tiles to assemble your own mosaics.