OKAY, I JUST REALIZED HOW GROSSLY MISLEADING THE TITLE OF THIS POST COULD SEEM, but, trust me, I never meant it the way it sounds. I was just struggling to find a phrase for the kind of photograph in which a person is as private as possible while on full display to the world at large. There are behaviors that are intensely personal and astonishingly public at the same time, and such events in a human being’s life are rife, for the photographer, with a very singular kind of drama.

We like to think of ourselves as sufficiently camouflaged behind the carefully crafted mask that we present for the public’s consumption, all the better to preserve our sense of privacy. But there are always cracks in the mask, fleeting signals at the raw life underneath. Learning to detect those cracks is the talent of the street photographer, whose eye is always trained beyond the obvious.

Mourning, Joy, Discovery…all these things provide a teeter-totter balance between public display and private truth. The primal basics of life bring that juggling act into view, and, as a photographer, I am often surprised how much of them is in evidence in the simple act of nourishing ourselves. Dining would seem, on the surface, to be all about simple survival. Eating to live, and all that. But meals are laden with ritual and habit, the most hard-wired parts of one’s personality. Food gathers people for so much more than mere sustenance. It is memory, community, religion, friendship, negotiation, reassurance, replenishment. It is a symbol for life (and its passing), a trigger for shared experience, a talisman, a consecration.

Case in point: the man and woman in the above image were seen in a Los Angeles restaurant late on a Saturday night. Their relationship would seem to be that of mother and son, but it could be grandmother and nephew, son-in-law and mother-in-law, or a dozen other arrangements. A sharp contrast is provided by their comparative ages and physicality. One sits upright, while the other sits as well as she can. There is no eye contact….but does that necessarily mean that they do not want to see each other? There is no conversation. Has everything already been said? Are they grateful to still be there for each other after all these years, or is this the fulfillment of an obligation, a visitation occasioned by guilt?

Eating is a microcosmic examination of everything that it means to be human. So much for a single photographic frame to try to capture. So many ways of looking into the publicness of privacy. 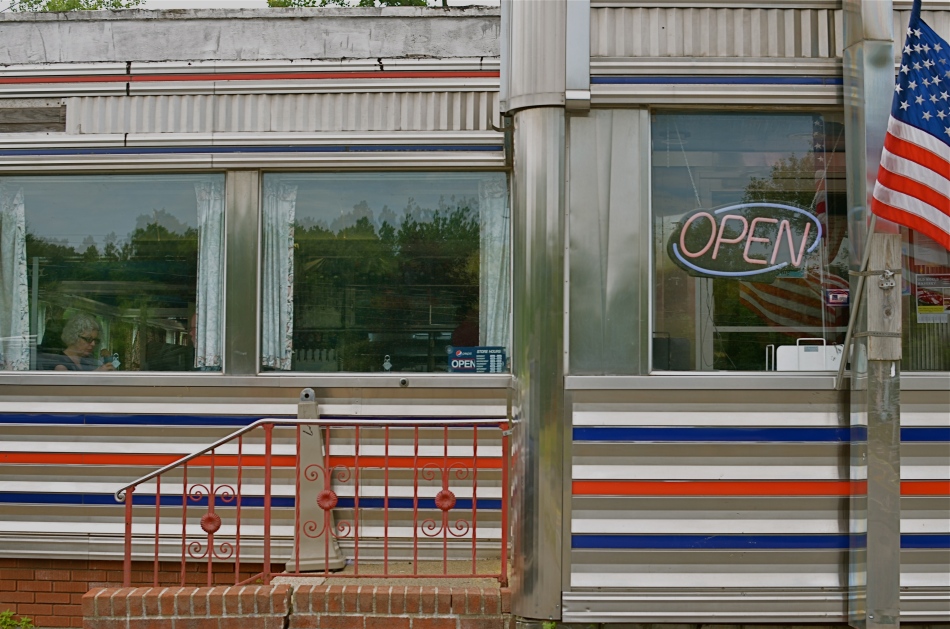