THE 1985 DISCOVERY OF THE WRECK OF THE TITANIC by Robert Ballard tested the talents of experts from as wide a range of specialities as the objects found in the doomed ship’s debris field. Some of the things found on the floor of the Atlantic were readily identifiable to the casual observer: chandeliers: cases of wine bottles: chairs. Cataloging others required the trained eyes of cultural historians, people versed in the daily world of 1912. The everyday becomes the exotic in very short order in the modern world. And one of the tasks for photographers is having these quotidian objects sit for their portraits before they pass, swept along in an ever-accelerating tide of change.

The Sony D-2 Discman, complete with surplus jacks for line-out and wireless remote. Things will be great in ’88.

You read about stunts in which common bits of household clutter from just a few decades ago are shown to millennials or teens, many of whom puzzle over what the object did, or was for. To be sure, going all the way back to, say, a rotary dial telephone could confound more than a few of us, but in these demonstrations, some young people have been stumped by iPods. Part of what brings a thing to the commercial market is the style it takes to catch the customer’s eye. If that typically fleeting style proves consistent with the object’s function, the thing may survive long enough to be a classic. Other such gizmos are transitional, the things given to us “on the way” to something more essential.

The recent Grand Hibernation we’re all under has made photographers reassess lots of things. What’s a fitting thing to make a picture of? What among our tools is still vital to our art, versus mere collected clutter? And, in the inevitable house-cleaning sparked by all this surplus time, what’s to be done with all the things we no longer use but for which we might harbor some residual affection? Should we mark their passing with a photograph? Should we create a “deleted” catalog of some kind? Is there anything to be gained or taught by doing so?

My favorite photographs often turn out to be the very ones I wondered the most about…that is, arguing with myself about whether they should be made at all. In the case of the Sony D-2 “Discman” you see here (circa 1988), I can’t say it was the first such device ever made for the purpose of making compact discs a portable and private habit, but it certainly influenced my own decision to turn away from vinyl (“heresy” I hear you hipsters hissing), and that, in turn, changed utterly the kind of music consumer I would become going forward. For some, the earlier, cassette-based “Walkman” was that moment. I just never embraced taped formats for a variety of reasons.

So this image represents a point at which I went from a rotary phone to a push-button? Craft your own analogy, and find the objects that, before they vanished, served as pivot points in your own life. Throw them out or tenderly tuck them back into storage for another day. But look at a few of them with a photographer’s eye. You may be far enough removed from them to see something new.

SOME PRACTITIONERS OF PHOTOGRAPHY EMBRACE WHAT THEY CALL REALITY, while other factions run as far away as they can from the strictures of the “actual” world. There will always be shooters who see their main role as that of a chronicler or witness, recording “Joe Friday” pictures, i.e., just the facts, ma’am. Others see the real universe as nothing more than a point of departure. Their images could easily be labeled “based on a true story.”

Neither viewpoint can go it alone. Without reality as a reference point, flights of fancy float off into chaos. Conversely, without a sense of whimsy, the gravity of the world can make a photograph leaden and moribund. Let’s face it: dreamers and didacts need each other, and complement each other within a single picture the way fat flavors lean meat. Moreover, trying to attenuate a customized mix of these two disciplines is the real fun in photography.

I’ve been fascinated of late by the new surge of interest in manual typewriters. It’s the same longing for recently-departed technology that’s fired a revival in film and the rebirth of vinyl lps. We are moving so quickly forward in some ways that we are understandably reluctant to regard every part of our past as dispensible ballast to be jettisoned on the way to some perfect Futureworld. And so we linger a while. We prolong our goodbyes a bit. 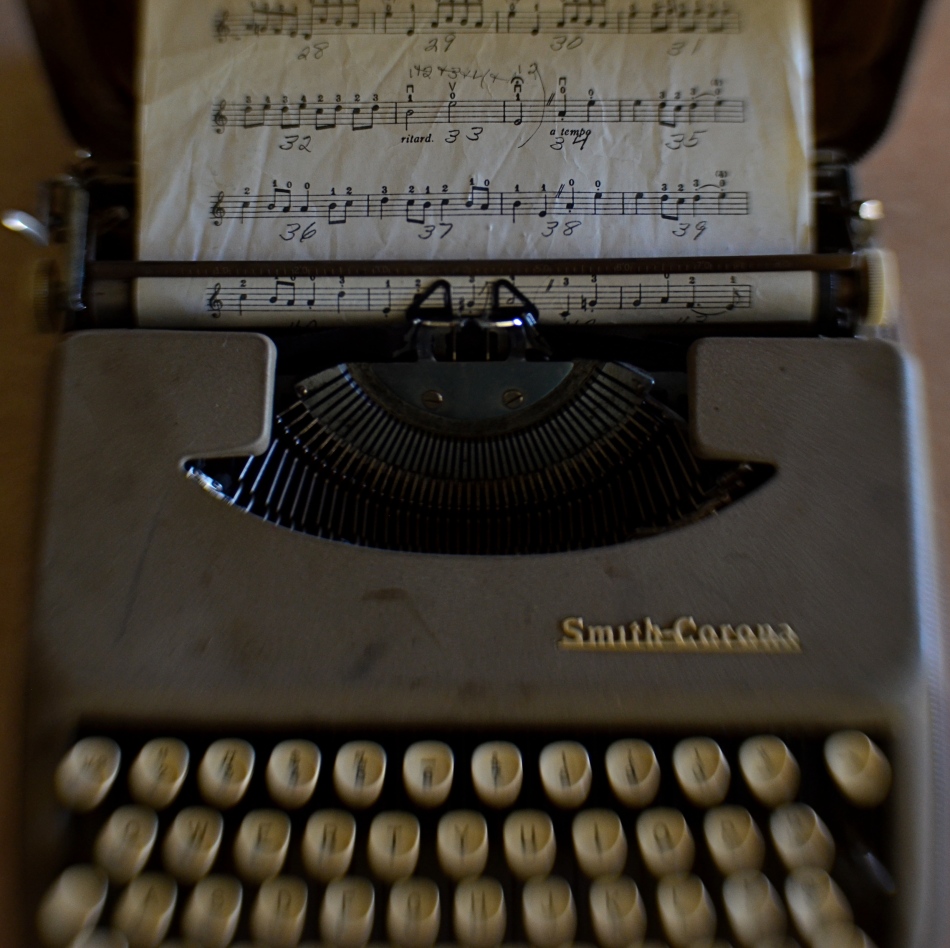 Some writers have recently renewed their love affair with the clack and clatter of the mechanical keyboard, marrying its noise, heft, and bulk to a kind of seriousness, as if a story or essay were somehow more authentic if pounded out on an old Royal or Smith-Corona. The recent documentary California Typewriter takes its title from a scrappy repair shop that survives to the present day by restoring old beaters for a new crop of trendy customers who either admire the sheer engineering wonder or the mystical oomph it confers on their scribblings. High-profile adherents like Tom Hanks, John Meyer and David McCullough rhapsodize about the contours, keyboard height, and return bell of their respective treasures. It’s great fun.

Photographically, I started to explore just how far the idea of the typewriter-as-magical-device could be stretched. Would it endow the user with the ability to solve knotty equations? Conjure ingenious recipes? What if the typewriter had unilateral power to enhance the creation of anything, even melody? What kind of typewriter might help Mozart crank out a concerto? Would his greatest works go mid-performed for centuries just because he transposed certain keys? And what would that process look like?

I decided to use a selective focus lens (the Lensbaby Composer with Sweet 35 optic) to de-emphasize the process of typing (the softly rendered keys) and call attention to the magical product (the sheet music being generated, focused more sharply) coming out of an imagined Corona wielded by an inspired Amadeus. The concept is so ridiculous that it’s compelling, producing a photograph which can’t be true but which ought to be true, rather like Dumbo using his ears to fly despite the fact that he weighs half a ton. I love these kinds of exercises because I embrace the fact that photographs can tell enchanting lies. And as Paul McCartney sings, “what’s wrong with that?”