FOR THOSE JUST JOINING US…

IT’S NOW OFFICIALLY BEEN “A WHILE” since I last did a group thanks/welcome to the many of you who’ve joined The Normal Eye in recent months. I apologize for the lapse in manners, and assure you that, while I usually use the right spoon for soup and cross only at the light, I still haven’t gotten around to getting my 1987 Christmas cards sent out. It’s a process.

So, assuming that a particular post has recently motivated you to subscribe to this here small-town newspaper, thank you. And, as a way of demonstrating what to expect from us on a day-to-day basis, here’s a little backstory on TNE: 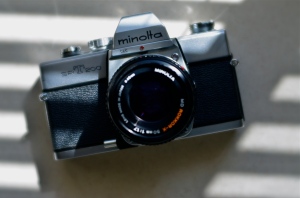 I wanted to create this forum because I feared, at the beginning of the digital age, that photography was becoming a reflexive act, a kind of knee-jerk spasm made ever more convenient but also more robotic due to amazing technical advancements that were almost literally taking the pictures for us. For sure, much of the muss and fuss of film was going away (a net gain), but the incredible foolproof–ness of even the most basic digital cameras was making speed and ease bigger considerations than the skills of seeing and planning, the most valuable traits of the slower, analog world…. a net loss, it seemed to me, for photography as an art.

Now to be clear, this platform is not, and has never claimed to be, a technical tutorial, and indeed the percentage of how-to advice we feature has always lagged way behind the why do it stuff. The Normal Eye is an examination of motivations, a way of restoring the human eye to its primary role in how pictures are made…..of normalizing it (hence the name). The eye outranks equipment, formats, subject matter, even formal training. With the eye, you can master your message with a cardboard box and a pinhole: without it, you won’t get your image made with an army of Leicas.

Happily, in the intervening years, the tide in all phases of photography has begun to turn back toward the instinctual, with amazing work by the world’s shooters that is once again placing technology in the service of the imagination. From the Lomography and Lensbaby revolutions to the resurgence of all-manual “art lenses” to a re-evaluation of (and partial return to) film, the art in photography is reasserting itself. Certainly no one answer works for everyone, but the questions are getting better.

So that’s what you signed up for: a conversation, a confrontation, a refusal to think of any single method or approach as “final” or “definitive”…..a promise to yourself to make pictures on purpose, with eyes wide open.

Thanks for joining the party.

This entry was posted on May 5, 2018 by Michael Perkins. It was filed under Conception, Editorial, Essay and was tagged with editorial, Theory.