ETHEREAL ON THE CHEAP

FOR MANY PHOTOGRAPHERS OF, umm, A CERTAIN AGE, our first cameras came out of the box pretty much ready to go, with lens and body working as two halves of a predetermined factory assembly. The lens half frequently was pre-set at a single focal length, and, in the really rudimentary models, a single shutter speed. Varying the results of such tools meant doing something as simple as shooting in shade instead of direct sun, or accidentally standing too close to your subject for an express ticket to Blursville. We learned the limits of our earliest cameras by operating them badly.

But this was not a worthless exercise, since all those crummy misfires, while teaching us what didn’t work, also taught us to eagerly explore what might work. As we graduated to better, more responsive/instinctual gear, we carried that approach to learning with us, and can still call upon it when we care to. Because, even as we have become accustomed to more and greater options via ever more sophisticated lenses and gear, we can still learn a great deal about our own creativity by deliberately limiting our choices from time to time, which is why I became fascinated, years ago, with the idea of keeping a chosen lens on a camera for an extended period, forcing myself to shoot any and everything with it regardless of subject or conditions. In a sense, you’re re-introducing the uncertainty and occasional failure of your earlier shooting techniques back into your work. But you’re also learning to problem-solve and improvise, infusing a new kind of energy into your photography.

The Normal Eye, you may recall, originally sprang from a year that I spent shooting exclusively with an f/1.8 50mm lens. Since that time, I have occasionally attached other lenses, all with differing strengths and weaknesses, to various cameras for extended periods to see what I could do when I couldn’t do what I preferred to do. It has always yielded me surprises and a lot of fun. Lately I am going steady with an old Soviet-era Helios 44M, a f/2 58mm prime dating from the late 70’s. Having been built for some of Europe’s most mass-produced cameras, the Helios is a solid, well-built beauty that is also plentiful in Ebay Land. It’s also cheaper than devalued Russian currency and produces both flatteringly soft portraits and distinctive bokeh, so a win all around. Many contemporary “art lenses” produce some of the same effects as the Helios but at a premium price, so seeing if you like the looks it creates while risking less than $40 is hard to resist.

Wide open at f/2, the Helios, a fully manual lens, has an aggravatingly shallow depth of field. We’re talking taking fifty pictures to get five in which you truly nail the focus. However, the gentle drop-off you’ll see between cleanly defined objects and their immediate surroundings affords a buttery, smooth quality that, with a little intentional over-exposure, can produce a decidedly dreamlike, pastel-flavored effect, as seen in the example above. For $40, I will gladly use this thing chiefly for this look. Now, certainly, this lens, like every other hunk ‘o’ glass, has idiosyncratic deficiencies and is not great for everything. But at these prices, it is worth spending, let’s say, at least a week learning how to consistently produce the results you want with it, as much for your own education as for the number of keeper images you’ll harvest. Consider also that this lens was originally sold as the “kit” lens for Zenits and a range of other Euro-cameras. It came in the box attached to the body. It was supposed to do most of what you’d want to do without swapping out to other glass, so that, by shooting with it exclusively for extended periods in today’s world, you’re experiencing essentially the same learning curve that was engineered into the lens back in the glory days of the U.S.S.R. It’s not exactly like riding a bucking bronco without a saddle or rope, but still, the horse does buck.

Learning what to do when your gear hits its design limits can either be frustrating or liberating. The choice of which of those feelings you, yourself, will experience, like all other choices, is yours alone.

ONE WAY THE EMERGING ART OF PHOTOGRAPHY SOUGHT TO LEGITIMIZE ITSELF in the nineteenth century was to cloak itself in the vocabulary of painters, to certify its value in the same terms that were applied to the art people feared it was conspiring to replace. This meant speaking of perspective, tone, realism, and all the other trigger words of the dauber. It also meant that, in the early days of recording media (paper, glass, eventually celluloid), that the formal occasion of making a portrait was also, as it was for the painter, a slow, deliberative process. Early photo portraits had to be “managed to death” since exposures took a minute or longer, certainly more “instantaneous” than a painted effigy but still requiring that the subject formally “sit” for the occasion.

After 1900, as film speeds and supplemental lighting evolved, the portrait could be mechanically done with less preparation, but the formality, the august occasion of having one’s picture “made” persisted. But whereas a painted or an early photographic portrait, for folks in the Victorian era, may very well have been the only official record of a person’s face over a lifetime, snapshot technology made it possible to have hundreds, later thousands of portraits of oneself shot from cradle to grave. And yet, it’s only in recent years that the traditional idea of a “serious” portrait has begun to finally fade from general use, with even formal photogs breaking free of the studio walls, taking wedding or graduation shots by quiet streams or rolling hills.

Which, to me, is all to the good. I believe in trying to select the right facial expression from settings in which the subject is in his or her natural element, extracting the optimum view from the rolling movie of that person in action, in motion. It’s the best weapon against the powerful, if unconscious reflex people fall into once they fixate on the fact that they are having their picture “taken”. For reasons of shyness, vanity, or the urge to put forth their “best angle”, people cinch up and pose to at least some degree, making their face just that much less natural than it is when they have better things to worry about. Taking a 100% candid snap is nearly impossible unless the subject has something to do beyond waiting for the dreaded shutter click. 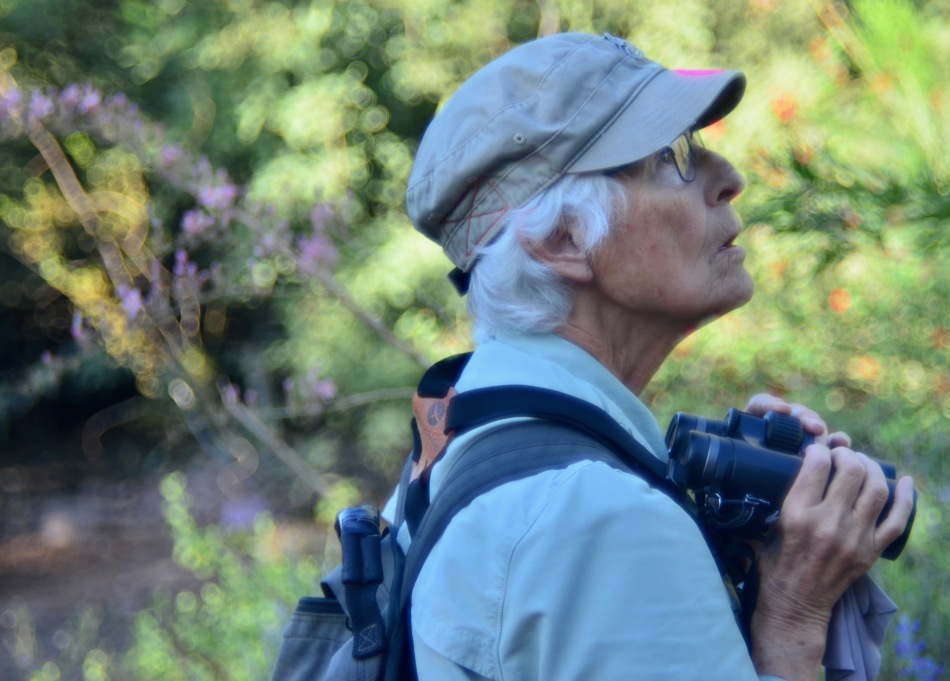 In the image shown here, I didn’t have to tell the subject to “act like you’re watching a bird”, because she was, in fact, watching a bird. She doesn’t have to portray a version of herself: she just has to be. The onus is rightfully on me to catch her looking like herself, not to attempt to replicate that self within the trappings of a studio in some kind of weird round of Let’s Pretend. It also helps that this setting isn’t my eye’s first acquaintance with her face, but rather a picture shot after months of watching her in the act of pursuing her passion. The old mind-set of portrait making from the 1800’s is thus reconstituted. My lengthy preparation and study for making the portrait happens ahead of the actual act of capture, with the physical execution of the shot taking as little time as possible, the better to relax the quarry and thus fend off any unconscious play-acting.

Ask yourself which your subject would prefer: being forced to simulate some version of themselves in a formal setting or being passively recorded while in the act of being themselves by a nearly invisible and non-invasive process. Portraits aren’t supposed to be homework and they aren’t effective when done solely on the photographer’s terms. Know your subject, get out of the way, and enjoy the surprises which are bound to result.

ONE OF THE BLESSINGS OF DIGITAL PHOTOGRAPHY (and the best argument for laying aside film) is the nearly endless and affordable numbers of “do-overs” it affords the learning shooter. Cranking out the sheer volume of practice frames needed to hone one’s skills and train one’s eyes used to be costly in both currency and years. As a consequence, many photographers had far fewer successful experiences than others. Money and time separated those who mastered their methodologies and those who were forced to click and trust to luck.

Digital cameras, through their pure scientific advancement, guaranteed that many more of our most hurried snaps were at least technically passable. But they gave us a far more important gift….the ability to speed up our learning curve through a speedy, risk-free process of constant feedback….an endless stream of yes/no, pass/fail messages that shape our work over the course of months instead of years, allowing us to understand what is going wrong, and fix it in the moment, while the family is still gathered in this room, while that amazing sunset is still grabbable. We learn everything faster, especially the use of new equipment.

Part of this “break-in” process for gear, at least for me, is to select something, anything to shoot with it……to not wait for a perfect occasion or an ideal subject, but to seek examples of the conditions under which I want to use the new gear. Any place can become a sort of kingdom of non-keepers, a lab for images where I don’t expect to do much more than make mistakes.

This kind of experimentation is perfect for days with iffy weather or drab, overworked locales, since part of learning a lens is figuring out how to make the ordinary extraordinary in any and all conditions. To my earlier point, shooting in this way seemed (to me) wasteful and risky with film: you always felt that you had to get a good return-on-investment for whatever the roll and processing were costing you. That could unconsciously lead you to shoot more conservatively, to play things safe, lest your crop of keepers be diminished by doing something reckless. But that’s the rub, innit? “Reckless” is where the good stuff comes from.

The shot seen here is from such a “let’s see what happens” shoot, a quick walk through a shopping mall I’ve visited a jillion times. The site has long since ceased to show me anything fresh to look at, but it sports a wide range of light conditions and textures throughout a typical day, so it is an appropriate kingdom for non-keepers, and a good place to crank off about fifty shots with a manual lens that’s still kicking my behind on precise focus. As it turns out, this particular piece of glass (a Soviet-era Helios 44) is soft even at its sharpest, but since that’s something I actually desire at times, practice is a must.

I’m a big believer, then, of shooting lots of pictures that “don’t matter”…..because they make you ready for the day when they really do. And because, once you can think less about how to take a picture, you can spend more time thinking about why you take it.