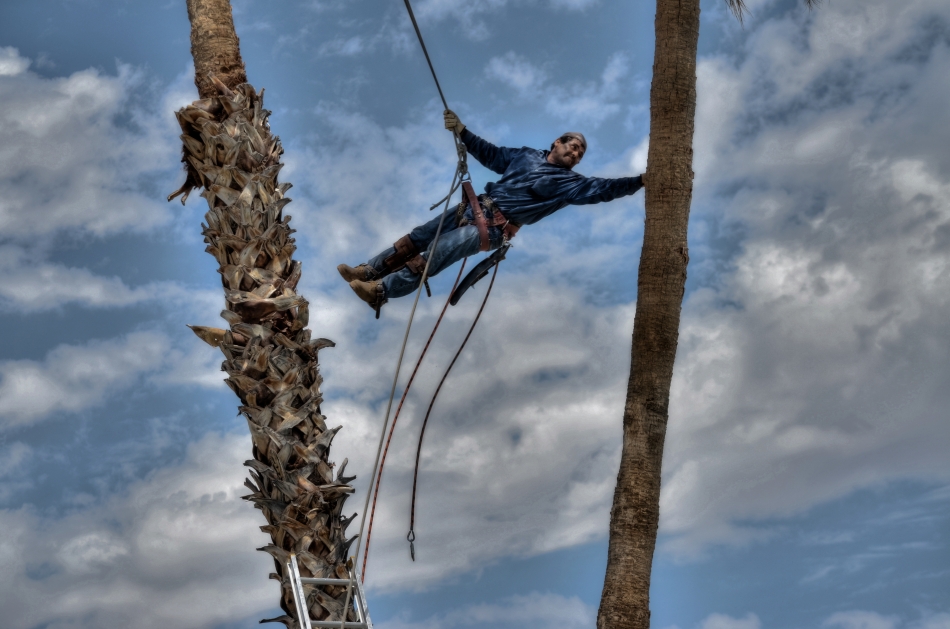 Sunshine Superman: Our landscaper floats with the greatest of ease between our now departed palm trees. 1/400 sec., f/8, ISO 100, 86mm.

BETTER MINDS THAN MINE have already taken note of the fact that 2013 marks the 100th anniversary of the penning of Joyce Kilmer’s poem Trees, a short bit of cozy verse which is either beloved sentiment or dreadful dreck, depending on which literary camp you pitch your tent in. I would have to confess that I find Kilmer’s ditty too cute by half, sort of the rhyming equivalent of a Thomas Kinkade painting, but, that said, faced with either the specious cause of “progress” or the faith it takes to plant trees, I side with the trees. 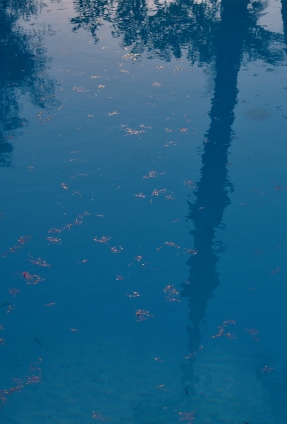 This particular better angel of my nature comes from observing 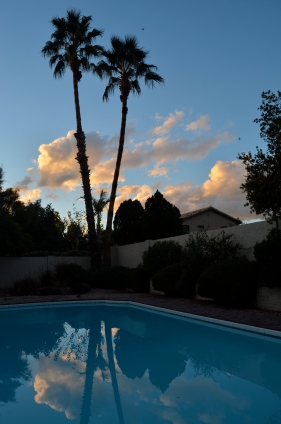 my father, to whom a connection between the soil and the soul is palpably real. If he were to assemble his version of The Avengers, he would sub out Whitman, Emerson, Thoreau and St. Francis for Iron Man, Thor, The Hulk, and Cap America. To watch him will twigs to vigorous life, or summon forth roses from wishes over the decades is to truly “get it”. He was Earth Day before Earth Day was cool. He was Rachel Carson in reverse drag.

So I have to pause for just a post’s-worth of mourning at the recent loss of two enormous palm trees from our place in Phoenix. These were not important trees in any grand sense; they afforded no shade, bore no fruit, marked no key battlefield. No children’s swings ever hung from their heights, and, as for sheltering purposes,  they were little more than a beak sharpener for the neighborhood’s woodpecker.

The palms’ annual shower of spring litter had become a sore point between our team and the next neighbor over. What had, at lesser heights, been at least decorative additions to the yard had become, twenty years on, a pain in the astroturf. So down Thing One and Thing Two went, and, with them, one of my favorite visual elements in that part of the property. Going back through the foto files in the depths of the Perk Cave recently, I saw them taking a star turn, again and again, most notably as a skybound workout for our daring landscaper. He was part of the crew that eventually sliced, diced, and hauled them away, and with respect and admiration, his lofty Olympic feat is featured here.

So, even though I will never exactly be the Lorax, and even though I think Kilmer was a hack, I myself seldom see a “poem lovely as a tree”, and I still peer quizzically when its old hunk of skyspace seems deserted somehow.

This entry was posted on August 31, 2013 by Michael Perkins. It was filed under Composition, Ecology, Environment, Landscapes and was tagged with Henry David Thoreau, Joyce Kilmer, Rachel Carson, tree, Whitman.