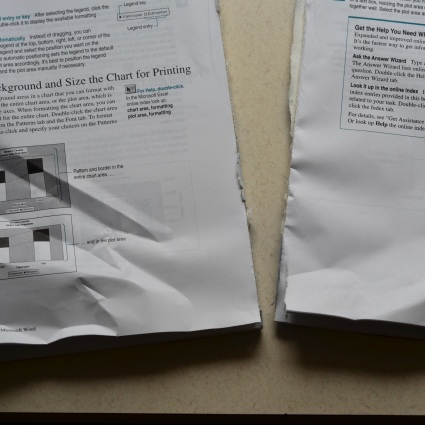 Yeah, I got your “documentation” right here, buddy…

ONE OF THE BEST INDICATIONS THAT YOUR TECH CUSTOMER IS, er, of a certain age is when you hear the question, “where’s the user manual?”, a phrase which registers, these days as, well, quaint. For photographers, the acceleratingly intuitive nature of camera gear, especially in the post-film era, may just mean that the designers have done their best to obviate the manual to as great a degree as possible.

This makes sense. Cameras used to require a lot of explaining just to make them work at all, and user manuals reflected this. The message was simple: unless you follow our prescribed steps, you can really louse things up. In an age that predated modern givens like autofocus, exposure compensation, or aperture priority, the user was responsible for everything involved in the making of a picture. You felt responsible as well, since you yourself had to deliberately set up anything you wanted your camera to do. There were no defaults, and the camera would not assume to know what you wanted.

Fast-forward to now, then, when, in taking delivery of your new camera, you are not usually taking delivery of the full “user’s manual”. It exists, but mostly online as a pdf. What’s actually in your box is a mini-quickie “startup guide”, about twenty pages of basics to allow you to operate the main functions of the toy. Curious about the rest? Go online. The secret behind the Amazing Shrinking Manual is simply that manufacturers don’t believe you will read the full manual ever, ever, anyway. A recent article on Learningstream.com, aimed at designers and marketers, even made a list of seven reasons why consumers would rather swallow arsenic than read the manual. They are; 1. They don’t have time; 2. They are lazy. 3. They “already know everything”. 4. They aren’t too bright. 5. They think “common sense” is enough. 6. They would rather call a help line. 7. The instructions are poorly written.

I would posit an eighth reason that people don’t read the full camera manual anymore; they will likely never use even half of the deluxe functions and add-on tricks that the camera has on offer. All cameras function largely the same way, and making a picture in the most basic fashion is remarkably consistent across brands. The things that give those brands their competitive edge is in the add-ons, the extra options that have been crammed into their chassis. Look through the documentation for your own camera and ask yourself, honestly, if there are tricks the thing will perform that you never thought to ask for, don’t use, or wouldn’t use in a million years. The simple truth; you don’t need a two-hundred page document to tell you how to take a picture. The bulk of the manual is for the “sometime” functions and exotic accents, while the majority of us can get up and running with only the start-up pamphlet. For pete’s sake, you get no documentation at all inside the box of the camera you’ll probably use most in your life…the one inside your phone. The manufacturers for cels have already taken things to the next level, assuming that consumers are not only bored but annoyed at anything that slows the taking of pictures. And since mistakes are free, and easy to fix, who can say they’re wrong?

One thing I do think is profound is that designers are constantly shrinking the space between our desire to make a picture and the delivery of said picture into our hands. It can certainly be argued that anything that gets out from in between the camera and the user is an overall good. As to the other stuff, take the advice my father gave me every time I asked him an annoying question: go look it up.

This entry was posted on November 8, 2020 by Michael Perkins. It was filed under Education, Equipment and was tagged with Instruction, product development.