FOR A LIMITED TIME ONLY

When Worlds Collide: The Graf Zeppelin cruises over the great pyramids at Giza, 1931.

ONCE WE WERE ABLE TO CAPTURE LIGHT IN A BOX, in the earliest days of photography, there seemed to be a worldwide obsession with recording things before they could vanish. Painters might linger in a wistful sunset over a craggy shoreline, and certainly that was part of the photographer’s prerogative as well, but, immediately following the introduction of the first semi-portable cameras, there was a concurrent surge in the recording of the ancient world…temples, churches, monuments, pyramids, waterfalls, Africa, Asia, empires new and old.

The nineteenth century saw an explosion in the number of world tours available to at least the wealthy, as seen in The Innocents Abroad, Mark Twain’s chronicling of a global excursion of Americans to the venerable ports of the old world. Cartes-de-visites (later post cards), stereoscopic views and leather-bound books of armchair photo anthologies sold in the millions, and the first great urban photographers like Eugene Atget began to “preserve” the vanishing elements of their world, from Paris to Athens, for posterity and, quite often, for profit.

This first-generation fever among shooters carried forth through two World Wars, the Great Depression, and into the journalistic coverage of revolutions and disasters seen in the present day. The photographer is aware that this is all going away, and that bearing witness to its disappearance is important. We can’t help but realize that the commonplace is on its way to becoming the rare, and eventually the extinct. We can’t know what things we regard as banal will eventually assume the importance of the contents of the pharaoh’s tombs. Ramses’ everyday toilet items become our priceless treasures. Now, however, instead of sealing up pieces of the world in pyramids, we imprison the light patterns of it, with history alone to judge its value.

Making pictures is taking measure of our world. It is our voice preserved for another time. This is what we looked like. This is what we thought was important. This shows the distance of our journey. New worlds are always crowding out old ones. Photography slows that process so we can see where one curtain comes down and another rises. 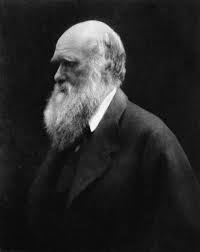 Charles Darwin sits for Julia Margaret Cameron. What she sacrificed in sharpness she gained in naturalness.

WHATEVER MARVELS CURRENT TECHNOLOGY ALLOW US TO ACHIEVE IN PHOTOGRAPHY, there is one thing that it can never, ever afford us: the ability to be “present at the creation”, actively engaged at the dawn of an art in which nearly all of its practitioners are doing something fundamental for the very first time. The nineteenth century now shines forth as the most open, experimental and instinctive period within all of photography, peopled with pioneers who achieved things because there was no tradition to discourage them, mapping out the first roads that are now our well-worn highways. It is an amazing, matchless time of magic, risk, and invention.

Much of it was largely mechanical in nature, with the 1800’s marked by rapidly changing technical means for making images, for finding faster recording media and sharper lenses. The true thrill of early photography comes, however, from those who conjured ways of seeing and interpreting the world, rather than merely making a record of it. In some ways, creating a camera

Most 19th photographers could barely capture people as objects: Cameron transformed them into subjects.

facile enough to fix portraits on glass was easy. compared with the evolving philosophy of how to portray a person, what part of the subject to capture within the frame. And it was in this latter wizardry that Julia Margaret Cameron entered the pantheon of genuine genius.

Born to courtly British comfort in India in 1815, Cameron, largely a hobbyist, was one of the first photographers to move beyond the rigid, lifeless portraits of the era to generate works of investigation into the human spirit. She was technically bound by the same long exposures  that made sitting for a picture such torture at the time, but, somehow, even though she endlessly posed, cajoled, and even bullied her subjects into position, she nonetheless achieved an intimacy in her work that the finest studio pros of the early 19th century could not approximate. Far from being put off by the softness that resulted from long exposures, Cameron embraced it, imbuing her shots with a gauzy, ethereal quality, a human look that made most other portraits look like staged lies.

In many cases, Julia Margaret Cameron’s eye has become the eye of history, since many who sat for her, like Charles Darwin, seldom or ever sat again for anyone else, making her view of their greatness the official view. And while she only practiced her craft for a scant fifteen years, no one who hopes to illuminate a personality in a photographic frame can be free of her heavenly mix of soft edges and hard truths.

Extra Credit: for more samples of JMC’s work, take this link to the Metropolitan Museum of Art’s Cameron exhibition page: